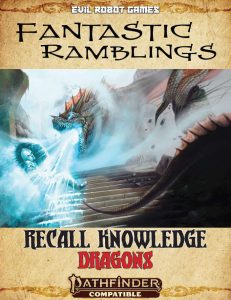 The first of the Recall Knowledge-pdfs clocks in at 9 pages, 1 page front cover, 1 page introduction/editorial, 1 page SRD, leaving us with 6 pages of content, so let’s take a look!

So, I’m a fan of monster lore. I like my critters deadly, and I like it when players are rewarded not for their outgame knowledge, but for actually doing their legwork. As such, PF2’s Recall knowledge use of the Lore skill, with its sub-categories, is something I genuinely loved seeing, and which I felt to be curiously absent from the Bestiary. Anyhow, this pdf is the first in the series to tackle the notion of PCs actually pausing to think about their foes.

The Lore subcategories in this supplement will be Lore (Dragon) and Lore (Arcana), with the Arcana DC generally being 5 higher than the more specialized one pertaining dragons; DCs by level are provided, ranging from level-1 to level 20, and DC adjustments are recapped as well. There is a brief table summing up creature identification skills (Occultism for e.g. aberrations and spirits). As standard in PF 2, critical successes will net you more (and better) information, while critical failures net you no or incorrect information; interesting here is, that a failure nets you one piece of true information, and one that is false or misleading.

A kind of Recall Knowledge statblock is provided: It lists the creature level, its category (here: dragon, metallic or dragon, chromatic), the type trait, DCs and best known ability – this is relevant for the critical success. One of these is provided for young, adult and ancient dragons. The base assumption is, that young and adult dragon knowledge is common, whereas that pertaining to ancient ones is uncommon – this makes sense, considering that most people will know about nearby dragons; furthermore, as they age, dragons tend to raid less, etc. – in short, the rules support the established in-game lore. I can get behind that.

Another useful feature of this book? You don’t have to paraphrase abilities – the pdf has you covered. There are 6 pieces of true knowledge, and 6 erroneous or incorrect pieces of information. These generally tend to seem plausible, and hey, might even be true in your game? Or, well, not, as per the standard. These tend to be plausible. “Bathing in dragon blood can make your skin invulnerable.” “Dragons can swallow their enemies whole.” Okay, the first was simple, but what about the second one? True in PF2 or not? See, that’s what I meant by plausible.

Each sub-category of dragon gets their own specialized table of such entries – these tend to range from 4 entries to 8 entries for the true knowledge, and 3 entries for incorrect information. Considering that most GMs will have a tougher time coming up with plausible lies on the get-go than paraphrasing information in not rules language speech, I think the focus here is a bit unfortunate – having more plausible false information would have been more useful, as far as I’m concerned. Your mileage may vary there, but yeah – that’s one of my biggest niggles here. I also think that each of the dragon types could at least have used 6 entries for each false and true pieces of information. I am personally rather fond of the inclusion of copper dragon jokes: “Why can no one see the minotaur rogue? He’s invisibull.” XD Having one such table for each dragon type, and the full 6 entries, would have elevated the pdf from being a neat one, to being a great one.

Editing and formatting are pretty good on a rules-language level, but on a formal level, I noticed a few missing full stops, and e.g. the incorrect information: “Brass dragons it.”[sic!] and “Brass dragons sunlight.”[sic!] Layout adheres to a two-column full-color standard, and the pdf sports a couple of rather nice full-color artworks. The pdf as no bookmarks, but doesn’t necessarily need them at this length.

Paul Fields’ first book on creature lore, both truthful and false, is a promising start for a new series. It has identified a oversight/hole in PF2 that can be filled with handy dressing-books such as this one. This is a helpful GM aid to have, and as a whole, is well-researched. At the same time, I couldn’t help but feel like it could have used more false pieces of believable information regarding the dragons, and the full complement of truths for each of them. Considering the low price-point, I will round up from my final verdict of 3.5 stars for this one, and look forward to tackling the one dealing with fiends!

Enjoying my reviews? Want to see me do more of a given system? Then consider leaving a donation or joining my patreon and telling me to do so.