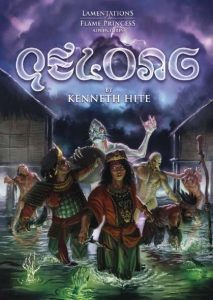 Qelong clocks in at 53 pages, 1 page front cover, 1 page editorial (which includes an amazing b/w-artwork in the pdf-version, one missing from the print version), 1 page ToC, 1 page artwork inside of back cover, 1 page back cover, leaving us with 48 pages of content, laid out in digest (A5/6’’ by 9’’), so let’s take a look!

It should be noted that I own both pdf and print version of this supplement – the pdf version has the full-color hex-map as a fold-out on the back of the book, with the backside of the map covered by the aforementioned b/w-artwork. Very cool: We do get a player’s map sans SPOILERS, but with helpful annotations!

Nominally, Qelong is designated as an adventure for characters of 4th to 6th level, and they should better be a well-rounded party of at least 4 veteran players – Qelong is deadly. The supplement uses Lamentations of the Flame Princess (LotFP) as its rules-set, but is different in several ways from most LotFP-offerings: There is but one enemy herein that has save-or-die attacks, and if you face that enemy, you’ve been doing it wrong. This creature is basically a local deity, so yeah – not intended to be fought.

Qelong is a difficult beast to talk about – it is southeast Asian in theme (awesome, we need more of that!), and it is clearly inspired by both Apocalypse Now Redux (and the original themes of Joseph Conrad’s Heart of Darkness) as well as by the themes of colonialism and pollution. Even as a European, it’s hard to not realize that there are some themes pertaining pollution, degeneration and corruption by pollution. It should be noted that these themes are not used to preach or evoke “xyz bad” feelings, but instead are employed to elicit a kind of horror we only rarely get to see. Qelong is one apocalyptic beast that manages to pull off grimdark, truly horrendous and frightening environments better than pretty much all comparable media I’ve consumed. I bought this book back in the day on the name of Kenneth Hite as the author, and it lavished unread on my shelves for very, very long, until a patreon supporter asked me to cover it – so yeah, as far as I’m concerned, this is an overdue review.

Formally, this book is in the weird space between regional sourcebook and hex/pointcrawl – it does not *really* adhere to either formula, and could be best considered to be a pretty freeform sandbox and adventure outline. There are read-aloud texts for hexes that e.g. feature canals and the like, but not for individual, numbered encounter areas.

Since this book is predicated on throwing the PCs into a highly volatile environment, the referee will definitely need to do some work here when running this; but not in the mechanics department or concepts, and only in the details and development as a result to the actions of the player characters. This is not a book I’d recommend to novice referees.

The book describes the Sajavedra region, and provides a total of 50 rumors, and yes, it does have a name-table (Yes!) and random encounter tables are provided by terrain type, and villages encountered can be in various states of dilapidation. To note this explicitly: This is not a happy-go-lucky environment, and it is not for kids; while it is not overly explicit or gory, it does delve into some seriously twisted themes. You have been warned – this is dark fantasy/horror. It is also more successful in its chosen field because it doesn’t sport the stupid “Roll a d%, oops, you killed the world”-bullshit that plagues some of LotFP’s offerings.

This notion of infection, of corruption, particularly that of parasites, mutation and infestation, of a biome trying to swallow you whole, is executed admirably well by Qelong: from “good ole plague” to typhus to the monsters encountered, to the global theme, Qelong is a genuine struggle for survival. The supplement contains two spells – one is an uncharacteristically lame “transform stuff into snakes”-spell, and the other is more of a story tool: It is a level 7 spell, and one that ultimately will end the module.

If Qelong has a weakness, then that would be that its 10 keyed encounter areas would have warranted more detail, particularly since one is a weird plateau that only serves as a way to plug in Carcosa-style oddness – and not a developed one, mind you. Indeed, Qelong feels, as a whole, brief – like it could have used 10 pages or more to further develop its concepts, go into more details, provide timeline-based events or the like – for there *is* a timeline.

But in order to start to explain this book, I will need to dive into SPOILERS. Potential players should jump to the conclusion.

Okay, only referees around? Great! When deities war, everyone suffers – and in one such war, a cylinder of a weapon unfathomable to puny men, fell to earth. To Sajavedra. And from it, aakom oozed forth. What is aakom? Picture pure magical energy crossed with Agent Orange and a healthy dose of radioactivity. Much of Qelong’s survival-struggle stems from aakom poisoning being an omnipresent danger. It’s in the air. The food. The water. Wounds, ability scores damaged by disease, everything can cause it. The land is blasted by spells flung from above, and residual death magics hang in the air. Those suffering from poisoning may develop a dreaded aakom curse – and you can’t cure it. Unless you find the source. Unless you find the cylinder, the shell that has fallen from a cosmic weapon, unnoticed by the combatants. The mechanics here are RELENTLESS, and if you play this, you should make sure that the group has cure disease (which can grant a brief respite), and that you implement the rules consistently. This is what makes Qelong unique – a persistent, brutal struggle for survival.

One that gets harder by the day. The peasants of the valley, marred by warfare, will try to steal armor. Bandits and cannibals roam the landscape. Angry ghosts abound, and beyond the hostile fauna, horrid Gaja Simha stalks the landscape (and WILL kill players thinking they can easily take it); between the mist and the lotus fields and the lotus-eating monks with their strange powers, the PCs will have their hands full – and that is before the three big factions, apart from the monks, come into play: On one hand, we have the Varangians – essentially a quasi-European colonialist army, who has undead elephants and a garuda-lich under their control. On the other, we have the 4-headed naga Qelong, basically an evil local deity, awakened by the aakom, and not happy…and with her, her slithering children have come. Oh, and there are the myrmidions. What are these? Ants. Ants that will make you living, mindless incubators. Their soldiers, always male. once human, now shielded by clay ingested, march ever onwards, driven by their mysterious hivemind, destroying everything they can, while harvesting those that can’t flee, adding to their ever-swelling ranks.

Yep. We have essentially a super strong monster, a quasi-deity, and not one, but two armies as dynamic factions. And yes, the varangian leaders get full stats. They are rather high-level as well. Any referee worth their salt only needs one of those to make the trip to Sajavedra awesome. All of them? CHAOS. And not in the funny way, but in the “maelstrom of nightmare-inducing fantasy warfare”-kind of way.

Particularly when you consider that the outclassed PCs will also have to contend with the ever-present aakom-poisoning, with mines shielded by strange elephant heads…and the spreading of the lotus monk’s way. This is pure, frickin’ gold. But what you weave is all up to you…the race for the cylinder, and the various cataclysms threatening this place…they’re on, and there is no easy salvation, no “I win”-button. This can carry a whole campaign, if you choose.

Editing is top-notch on a formal and rules-language level. Formatting is somewhat uncommon, as NPC stats, such as HD, AC, etc. are not bolded or otherwise set clearly apart, but spell-references and the like are bolded and in italics – formatting could be better, but is totally okay. Layout adheres to a two-column b/w-standard that uses a lot of high-quality, evocative b/w-artworks. The pdf version has a really amazing one missing from the softcover. The cartography of the hex-map is decent and full-color, but the lack of a player-friendly version of that one means it won’t be seen by many. Having instead the player-map in full-color would have been smarter. The pdf is fully bookmarked. The physical version is a softcover book, with name on the spine. It’s solid for the length, and personally, I think that books of this length should not be hardcovers in most instances, so yeah. Nice one.

Kenneth Hite’s Qelong is a breath of fresh air; even if you generally don’t like LotFP’s excessive gore and sometimes random “oops, everyone dies”-moments, Qelong may be worth checking out. I certainly consider it to be one of the best books in the entire catalog of the company. Its themes of warfare and pollution, of struggling for survival, are strong in theme and implementation, yet always grounded in that gritty mud, while smoke-and lotus-choked haze and imagery suffuse it.

This is one of the best set-ups I’ve ever read, but the lack of timelines, of less freeform guidelines may make this less referee-friendly for novices than it needs to be. This is not a book to spontaneously run; it needs planning, expansion and a referee capable of making this their own. That being said, if the above sounds even remotely exciting to you, then Qelong will probably blow you as much away as it did me. I seriously wished that master Hite wrote a longer book here; I’d certainly immediately go for a 100+ page hardcover of this level of quality. As provided, Qelong is not an adventure, nor a setting book per se; it is a toolkit to make your version of this nightmare. If you understand that, and are willing to invest the effort, it is simply brilliant; if not, you may want to detract a star, for the scavenging potential isn’t as high – this lives from the combination of factors working together. My final verdict will be 5 stars + seal of approval.

You can get this unique adventure toolkit/setting here on OBS!

The print version seems to be currently out of print, but you can still find copies on Noble Knight Games here!

If you have a dime to spare for your humble reviewer, I’d appreciate a donation, or joining my patreon here.