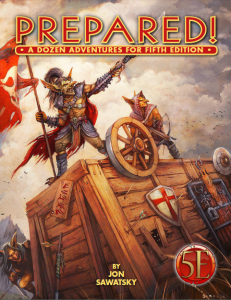 This compilation of side-trek modules for 5th edition clocks in at 26 pages, 1 page front cover, 1 page editorial/ToC, 1 page SRD, 1 page back cover, leaving us with 22 pages of content, so let’s take a look!

Wait, before we go any further, one important note: You need the Tome of Beasts, Kobold Press’ massive and gorgeous hardcover of 5e-monsters to properly use this supplement, as statblocks have not been reproduced herein.

Structure-wise, these encounters/sidetreks are pretty easy to grasp: We get a background and then the different Adventure Elements that make up each sidetrek – usually, but not always, 2 – 4. These can all be combined or modified – here, we can find fight choreography, mini-events to keep modules dynamic and complications. Basically the moving parts, which come, where applicable, with read-aloud text. The areas themselves are also covered this way and each of the respective sidetreks gets its own full-color map, with one of them being isometric. The maps sometimes have fitting annotations and graphical elements like scribbled symbols, blood-spatters and the like.

All right, this out of the way, let us take a look at the modules within! This, unsurprisingly, entails SPOILERS. Potential players should most certainly jump ahead to the conclusion.

The first mini-module herein would be “The Impregnable Fortress of Dib”, intended for characters level 1 – 2. The eponymous “Dib” would btw. be a goblin who, with his buddies, has a penchant for wrestling. Goblins being goblins, this entailed copious destruction and thus, these guys were exiled from their clan, building a fortress (with pitiful, half-finished moat) from a tipped over, abandoned wagon. It is this “fortress” that makes the short adventure interesting, for the fortress behaves somewhat like a creature of its own, with initiative and attack/defense options – and from burning it down to tipping it over, the means to deal with it are nice. Oh, and below is a brief cavern-complex. All in all, a creative and fun sidetrek!

The second quest is for level 1 – 3 characters and is called “The Marrow Mines” – in it, the PCs explore, starting from a cavern, the skeletal wing of a titanic dragon, wherein the addictive marrow is mined by kobolds…and holds visions that may tie in to a greater plot.

For 2nd level PCs, the “Vault of Pallon the Pious”, a pirate who turned lawful in his twilight years; ostensibly, this caused him to go mad and now his famous scales are still hidden there…but are they really magical? The module also sports the subtle humor we could see in the first module with the word “Wrongteousness” making for a key leitmotif. You’ll see…

The “Claret Wellspring”, for level 4 – 5 characters has the PCs follow strange lights to an oasis, where blood-red waters and arcane secrets of old await…and the mini-module is surprisingly atmospheric, focusing on the strange and wondrous…and the adventure sports a rather cool reskin for a monster. So far my favorite!

“The Room with 5 Corners” for characters level 6 – 7, deals with a streegang that has recently been taken over by a dread aberration, who is extracting the solidity from victims, rendering those that survive partially ethereal and unable to cast a shadow, with eldritch symbols awaiting…as well as a disquieting portal…but where does it lead? Can it be easily closed?

“Upon the Icebound Terrace”, for characters level 6 – 7, pits the PCs against the machinations of an exceptional ice mephit, who plans to open a planar gateway to the plane of ice…and with the relatively complex terrain and the arrival of an unintentionally summoned dragon, things get even more complicated. Tactics-wise, this is one of the stars in the compilation, with the blizzard not helping in the assault, and it is certainly one of the more complex set-ups, though, much like before, it rewards smart players.

“In Its Horrid Wake” put 7th level characters in the aftermath of an attack on temple: The dread demon that compromised it may have moved on, but the gnolls that travel in the aftermath haven’t – and they plan on finishing a ritual to receive the favor of a fang of Nikshi: The scavengers have to be defeated, lest more woe follow the stride of the grand demon.

“A Bad Night for Betting” puts level 8 – 9 characters in the remote village of Bleak Rock, where dog mole wrestling is pretty much the only form of viable entertainment…but unfortunately, the alchemical concoction sold to the owners of the beasts is about to result in some seriously lethal mutation…enter the players.

“The Burning Crater”, for level 9 – 10 characters, has the PCs find a crater containing a strange metal object – and closer inspection reveals that it is hellshot – basically a cannonball that contains hellhounds…while the fire giants developing this artillery have obviously not perfected it, the arrival of the scout and mere existence of it should prove plenty of motivation for stalwart PCs, beyond the confines of the sidetrek.

“Atop the Mountain”, intended for 11th level characters, centers on a fountain, once a planetar rewarded and transformed thus, which lies atop a mountain – the previously pure waters are spoiling, so it’s up to the PCs to save the angel…but easier said than done, for careless spilling of the devilish blood of the corrupting fiends may well spell doom for the erstwhile champion of good’s immortal soul…

“Under Reveler’s Feet”, for characters level 12th to 13th, has the PCs explore the basement under a very busy feast hall, and indeed, in the dark below, undeath looms while above, the party continues…

The final sidetrek, “The Obsidian Pass”, is intended for characters level 14th to 15th and has the PCs help defend a fey village and resting place of a powerful artifact from the greedy hands of a sorceror, who is in the process of constructing an arcane siege weapon…and whose clockwork soldiers and golems are all too ready to attack….

Editing and formatting are top-notch, I noticed no serious hiccups. Layout adheres to a gorgeous two-column full-color standard and the pdf sports amazing full-color artworks. The pdf comes fully bookmarked for your convenience. Cartography is amazing as well…though I am quite a bit sad that we don’t get key-less player/VTT-friendly iterations of the amazing maps.

Jon Sawatsky’s collection of 5e-sidetrek and encounters is creative, diverse and fun – pretty much every region and gaming group should find a worthwhile, instantly-prepared scenario herein that can be run on the fly. The options are diverse, the creature selection is fitting and the modifications of creatures with new abilities, the terrain hazards and the like all conspire to make this a worthwhile collection. That being said, the absence of player-maps, particularly considering the no-prep angle of these scenarios, hurts the pdf even more so than it would a regular module. Personally, redacting maps and/or drawing them myself is pretty much the worst timesink in my whole preparation routine (and I suck at it). Considering the gorgeous maps, it really hurt me to note that, quite realistically, my players would never get to see them. If you don’t mind that, then consider this a 5 stars-offering. If you’re like me and consider that an issue, detract a star. Ultimately, my official final verdict will clock in at a rating in-between: 4.5 stars. I’d usually round up, but considering the go-play mission-statement of the compilation and that, at least for me, it does not fulfill it perfectly, I’ll round down instead.

You can get this compilation of mini-modules here on OBS!
Endzeitgeist out.