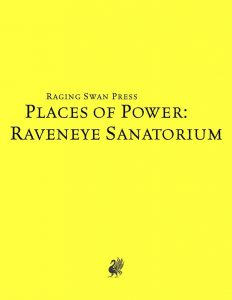 The institution is headed by a rather brilliant scholar, with further staff being a doctor prone to quick diagnosis, a none-too-nice chief of staff…and the fortified grounds include a garden and some fluffy write-ups for patients – from beings halfway transformed to a skum, kept here to prevent the poor being from going to the ocean, to the possessed, with malignant spirits seeking freedom, the patients here are dangerous…and include benevolent werewolves. Still, with 6 sample rumors (some being nasty and playing to the bad reputation of sanatoriums) as well as 6 events, we have an overall great locale…and if you do want to use this in a more traditional manner, you’re covered – one NPC can be used as a malignant infiltrator and BBEG, if you wish to use the place in a more traditional manner…or if you want to have this place of healing transform…or come under threat. Really nice, btw.: The system neutral version, big plus, actually does come with a marketplace section of goods and services to acquire, which is really nice to see. As a VERY minor nitpick, some NPCs are called “wizards”, not “magic-users.”

David N. Ross’ sanatorium is a great place – it inverts the traditional expectations of such locales in roleplaying games, while still allowing for the use in a traditional context. the characters presented, from the staff to the patients, are similarly colorful, with most being capable of carrying at least a session or sidequest, making this a rewarding place to include in your game. In short, the pdf is great and rewarding for the low and very fair price point. The optional trope inversion adds a nice level to this pdf as well – nothing to complain regarding this gem. This pdf doesn’t lose anything in the system neutral iteration, with only aforementioned, very minor terminology hiccup. My final verdict will clock in at 5 stars + seal of approval.