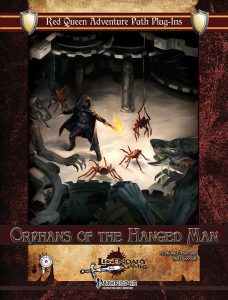 This adventure clocks in at 40 pages, 1 page front cover, 1 page inside of front cover, 1 page editorial, 2 pages of introduction, 1 page ToC, 1.5 pages of SRD, 1 page advertisement, 1 page back cover, leaving us with 30.5 pages of content, though it should be noted that, as always for Legendary Games, the layout manages to fit quite a lot of content on these pages.

Now, before we start: This is a level 1 adventure and assumes the medium advancement track. There is one more thing that sets this apart: This module is intended to be run for a single PC. Yes, this adventure is actually designed to be a viable one-on-one module for one GM and a player; as an aside, it is very much possible to tackle this adventure as a group. Particularly for groups new to PFRPG, this may well make sense, as the adventure is rather fair. It does decrease the challenge, obviously, but it can provide an appropriate segue into the Curse of the Crimson Throne AP without becoming as deadly as the APs first two modules are. So yeah, this does a good job as an AP plug-in.

At the same time, it should be noted that this adventure is not necessarily tied to Korvosa – it is very easy to convert the adventure to another metropolis. Provided there is crime, a bit of squalor and street urchins, as in most cities, this will require no further work to adapt.

It should be noted that the module contains a specialized light-source for thieves as a mundane piece of equipment; there also are a few low-cost magic items and a new poison included. The magic items, while helpful, will not break the AP, if you choose to run it. Now, one-on-one adventures tend to be punishing on spellcasters in particular, though this one is very much manageable for spellcasters. It is probably easier for skill monkeys and martial characters, but a smartly-played spellcaster can very much succeed here. Considering their fragility at first level, this is pretty impressive. The DCs of skill uses etc. are very conservative and low, providing decent chances for success, even if the PC does not have the skill.

The module begins with the PC living in a rather poor hovel – and to make matters worse, the coughing old crone next door complains about your “friends” visiting – well, it turns out that the PC’s place has been trashed, a makeshift trap balanced on top of the entry door. This trap will not kill the PC, but it will provide a first idea to remain careful. A small noose hangs from the ceiling…the calling card of the legendary thief known as “The Hanged Man.”

The old crone, when questioned, can help cleaning the place “Don’t tell people I have magic, dearie.” – and also assist in minor magic identification for doing her chores. From here on, we have a free-form investigation, with 4 results per general topic provided and thus, degrees of success and information applied. The DCs are low enough to allow for easy and painless use of this section. Even total failure in every regard will not prevent the PC from finishing the adventure.

The “Orphans of the Hanged Man” ride the coattails of the fame of the fabled thief, trying to establish his calling card as theirs – the aforementioned noose. The PC can happen upon three of their thugs trying to coerce the street urchin Collin into their gang. The thugs will recognize the PC if undisguised, and will not attempt to kill the character – though a sound beating may occur. Here, their tactics should be commended: They make sense, but allow the PC a fighting chance: They tumble and attempt to demoralize in the first round, and their use of grappling and nonlethal attacks prevents undue frustration due to bad rolls here.

The investigation that follows this encounter, with Collin as a new ally, is actually heart-warming and a tone I personally always fail to evoke when I try: It manages to depict kindness and hope in even the dire and poor straits that exist in the slums. From the melancholy watchman to a girl in love, these happenstances provide glimpses into a simple, yet endearing life: The slums may be a place of poverty, but it’s also a place of life, in all of its facets. The girl I mentioned? She is planning a rendez-vous with her fling and may provide an angle – as PC and Collin seek to get a steak for the PC’s bruised eye, they may hit jackpot thanks to the girl and an overheard conversation – and thus, the PC will find a wizened, venerable old man…the Hanged Man, who is not amused by the Oprhans slandering his name. Duly amused by the PC finding him, he grants the PC a magical ring that can help particularly roguish PCs. He also provides some cryptic clues and challenges the PCs that he, back in the day, has left a test of sorts – the rest of his goods will need to be earned. Once more, this contextualizes the man as a scoundrel, but as one with a good heart. If the PC asks, he’ll even tell the character how he avoided being hanged.

Anyways, the trail to the Hanged Man’s erstwhile base leads to the sewers below the “Crimson Shears”, a tailor’s shop. The sewer intersection is duly mapped in gorgeous full color, and yes, we do get player-friendly maps! Huge plus there! It is here that the PC can help a grindylow fight off some dire rats…and saving the grindylow’s buddy will net further benefits. Once more, a theme of nobility is conveyed and rewarded. This taps into a unique idea: In order to find the entrance, the PCs have to find a faux-aged boat, draw a pin, and have the boat flip over: With a bubble of air, the boat can be capsized in a controlled manner, providing access to the entrance! There are means to discern this, but helping the grindylow also provides a pantomime that cues in the PC.

Once more, this is a pretty simple set-up that does not require magic, but at the same time, it is clever enough to warrant not having been found yet. If the PC would drown, a parasitic fey can act as a last-ditch save, providing consequences for failure without resulting in a “game over.” The PC finds the first part of the Hanged Man’s magical snapleaf key here. The tunnels terminate in a run-down tannery, and from here, the next locale is an abandoned warheouse oozing atmosphere and sporting some minor hazards as well as a giant flea…and there is a thankfully slow, legless skeleton prowling these grounds…and here, the PC can find a lucky penny as well as a clue to the Hanged Man’s abandoned base of operations – the sewer refuge the PC may have already explored…so yeah, there is more than one sequence in which these may be tackled.

Beneath the warehouse, a three-level dungeon can be found. The dungeon, once more, is fully mapped, even including a side-view that highlights vertical connections, and yes, we once more actually get player-friendly maps here! Huge kudos! The complex has, in the mean time, been taken over by gremlins and an akaname, which serve as appropriately low-level threats. Did I mention the mold hazard that erases 30 minutes of time before being knocked unconscious by it? From training dummies to broken-down machinery, this also acts as a cool homebase/mini-defense scenario. Elganion, the adolescent and rather bitter elf that leads the Orphans, will sooner or later track down the PC with his crew – and smart PCs may use this cleared complex and allies like Collin to defeat the orphans! While this is intended to be the climax of the module, and as such, is pretty freeform, it’s just as possible to have the Orphans find the Hanged man’s complex after the PC has explored the majority of it…

Anyways, within this complex, the second half of the snapleaf key (artwork included, just fyi!) awaits, and with it, the PC can open the secret room in the “mausoleum” of the Hanged Man – if she does, she’ll only have to defeat the consequence of the one premeditated murder the Hanged Man committed: The Beheaded that once was the informant that led to the Hanged Man…hanging.

It should also be noted that the PC should not and need not kill any of the Orphans – not even Elganion! Aforementioned memory-loss inducing mold, combat challenge severity etc. does allow for the PC to solve the conflict with the orphans in nonlethal ways, and is preferable: This way, the PC may end up with a small network of informants, as the new and proper heir to the Hanged Man’s title!

Editing and formatting are top-notch, I noticed no glitches on a formal or rules-language level. Layout adheres to the elegant two-column full-color standard of the Curse of the Crimson Throne-plug-ins. The pdf sports quite a few impressive full-color artworks and the pdf comes fully bookmarked for your convenience. The map-support deserves special mention: All relevant locales are mapped in GORGEOUS full-color, and come with player-friendly maps that have secret doors etc. redacted. Huge plus right there!

Michael Allen and Matt Goodall have penned a tale that is almost Dickensian in its themes and atmosphere: There is a wholesome joy in this adventure and the interactions with the NPCs that is hard to describe. The emphasis on roleplaying and problem-solution over just rolling the bones is a big plus, and the module rewards esoteric skills here and there, while at the same time allowing the PC to finish the module successfully without requiring them. From the neat NPCs to the locations, this represents an incredibly rewarding adventure that makes for an actually good one-on-one module, even if you’re going for a spellcaster. That is hard to pull off.

Furthermore, the adventure, in spite of being not explicitly designated as such, is in my opinion a family-friendly experience – kids at around 8 years should have no issues with this, while adults will similarly enjoy this. As always regarding age-recommendations: Parents know best how sensitive their kids are, and kids greatly diverge in what they consider to be cool/what they can handle.

The emphasis on non-lethal problem-solution, the small tidbits of creepiness that are very much manageable…this is an adventure I’d run for my offspring, should I ever have kids, to introduce them to PFRPG. It’s not explicitly designed to work as such, but it does work this way if you choose to run it as such.

It feels a bit like a story-arc in Oliver Twist or David Copperfield to me – it doesn’t coddle and treats the audience with respect, it does not paint the world in black and white, and is better off for it. The theme of a gang of bullies is something that most folks will be able to relate to. It is difficult, without being unfair or generating frustration. It’s not necessarily a good choice for the first module to GM (Trail of the Apprentice does that better), but to play? Yeah, this would get me more invested-

In short, this is an excellent adventure I can wholeheartedly recommend – and not only for the context of Curse of the Crimson Throne! Highly recommended! My final verdict is 5 stars + seal of approval.

You can get this inspired One-on-One adventure here on OBS!