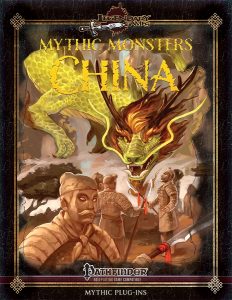 We begin this installment, as always, with supplemental content – this time around, that would be two pages containing 6 feats and 5 minor artifacts. The feats would be so-called Blessings and come with regular and mythic iterations: One enhances your Survival skills in forests and makes you harder to track; two unlock skills as class skills and one unlocks foo dogs for summon monster et al. Slightly problematic: The Blessing of the Lungwang allows you to 1/round gain +2 to atk on the next attack versus a foe that has hit you, with the mythic version allowing for multiple foes to be eligible. Another one lets you 1/day bypass DR/hardness as adamantine. These feats are okay, but ultimately not something I’d get excited about.

But we’re here for the creatures, right? Right! At CR 5/MR 2, mythic foo lions cause damage to weapons (and fists) of those that attack them and also come with a pretty cool mythic template for the creation of further foo creatures, with new/improved abilities at every rank, including retributive attack, ghost sight, etc. – I like the template…a lot. But at the same time I don’t get why the mythic iteration doesn’t do something cool with freeze…oh well.

The mythic hundun, at CR 26/MR 10, is BRUTAL; she can teleport targets closer via mythic power and the strange attractor, her entropic mind is more potent, she may actually drain mythic power and her very touch may basically destroy almost everything. As a minor gripe the build is missing the notes of the signature strange attractor, which imho would have made for an excellent upgrade for mythic treatment; the absence of the ability (referenced in the statblock) also makes for unnecessary book-flipping.

After these, we check out the majestic imperial dragons next: Imperial Forest Dragons (age category mature adult) clock in at CR 19/MR 7 and may animate plants at will, controlling multiple trees and gain an alternate poisonous breath. They are also a living growth accelerant and act as a massive fast healing battery for plants in the vicinity. While the base abilities of the non-mythic dragon have not been listed, they are part of its statblock here and since they are less iconic than e.g. the foo lion’s freeze or the hundun’s strange attractor, I can live with that.

The imperial sea dragon provided is very old and hits a lofty CR 20/MR 8; these guys are constantly under tongues and gain +4 to Diplomacy (nice nod towards the mythology) and they calm waters. They may also generate basically a panacea water 1/week, making the water exceedingly potent in dealing with curses, diseases etc. – and at this CR/MR, I can even live with it being a flat-out heal instead of tied to CL/HD. They also get a kind of DR based on tier to ability drain, damage negative levels, etc., may duplicate mythic control weather with mythic power and use mythic power to call forth shipwrecking maelstroms. Nice!

At CR 16/MR 6, imperial sky dragons come in the adult age category here and gain evasion while airborne, may hijack cloud/gas/mist spells, have indomitable will, which may be further enhanced by mythic power and may cloak itself in swirling winds. So put down that bow…Lavishly rendered in a full-page spread as seen on the cover, the ancient CR 25/MR 10 sovereign dragon is brutal: Two pages. With the series’ relatively small font. Yeah, I love the guy, particularly that his breath is determined by the very seasons! Oh, and both breath weapon-charge-combo, magic eating etc. are amazing; with nary a glance they can send foes cowering and they may shed a sacred tear 1/year…oh, and mythic true seeing (reproduced for your convenience)…all awesome.

At CR 21/MR 8, the mythic imperial underworld dragon can strip foes of fire resistance and immunity via the aptly named “Burn for me”-ability; they may also breathe chocking gas that locks down actions of those affected. It may also burrow down, only to erupt in a burst of devastating lava – yeah, awesome boss material! The disturbing Jinmenju’s mythic iteration stands at CR 13/MR 5 gets an excellent upgrade to its fruits – they are now addicted and those that partake in them can be controlled. Oh, and their fruits now also laugh and may be flung. Damn, this critter gives me the shivers…

The Terracotta soldier presented herein comes to our game at CR 7/MR 3 and features a nasty death-curse…oh, and they can call forth non-mythic terracotta soldiers…and they may reform upon being destroyed, taking several myths associated with them and providing some nice additional fodder. There also is a variant for archers and horsemen provided – though the archers only get variant feats and the riders as noted to be Large and 10 HD, with new feats provided…but actually getting BAB etc. for these would have been nice….the page containing them has enough blank space to potentially allow for that. At the same CR/MR, the jumping vampires, the jiang-shi, start overcoming weaknesses, depending on mythic rank and the template provided provides a 9-rank progression…which I greatly appreciated. In fact, the design philosophy here is remarkably close to the increasing power-levels by age I employ in my own home game for vampires.

There also is a low-CR critter herein: The mythic xiao at CR 3/MR 1 does not provoke AoOs when disarming or stealing and may use mythic power to steal more. Solid.

The new creature herein, absolutely beautifully depicted, would be the CR 7/MR 3 mythic nian may add frightful presence to those charged, have a deep-seated aversion to the color red as well as sensitive ears…but don’t underestimate these deadly predators: They may charge, withdraw and run at angles and reposition those hit by its Vital Strike bite/gore-supplemented assaults…very cool, efficient and brutal critter.

Editing and formatting are very good, i noticed no significant hiccups. Layout adheres to Legendary Games’ two-column full-color standard and the artworks featured herein are nice – in particular the nian’s artwork is amazing. The pdf comes fully bookmarked for your convenience.

Jeff Lee and Loren Sieg deliver herein: As befitting of the series, the creatures featured herein are pretty much amazing and superior in how they represent the tropes of the original beings the monsters are based on. That being said, this series has also spoiled me beyond belief when it comes to critters and e.g. the hundun and variant terracotta soldiers felt like a bit less than what they easily could have been. Similarly, the xiao could have used a bit more love…but, don’t be fooled – this is still a pretty much excellent book and hence receives a final verdict of 4.5 stars, rounded up, also due to the feats being not that amazing. Blame the series for spoiling me and get this. 😉