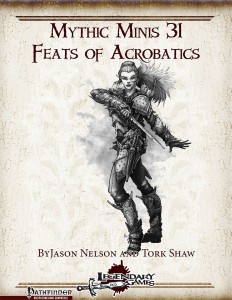 -Cartwheel Dodge: Your movement below 1/2 base movement does not provoke AoOs, any excess movement of up to your movement rate does. Use mythic power to take an ally along for the ride at the cost of 1/2 your speed. See this is the level of awesomeness I love to see in this series!

-Duck and Cover: Better bonuses, also depending on shield type, and use it even without adjacent allies. Nice.

-Landing Roll: Stand up as part of the immediate action, provoke no AoOs while doing so for mythic power. Alternatively, move half movement rate before falling prone. Power slide, anyone? Nice!

-Passing Tricks: Feint as a free action rather than as a swift one. Use mythic power to feint opponents against which your acrobatics check failed regarding moving through their squares.

-Swap Places: Allies may move as free action when swapping, enable allies that don’t have the feat to use it as an immediate action; this can be executed as a swift action. use mythic power to decrease this action economy-wise to a free action each. Complex, tactical, hard to get right, awesome!

-Underfoot: Numerical escalation; decrease size-bonuses against your movement and use mythic power to keep moving even after an AoO, but not through an opponent’s square. Nice!

Tork Shaw and Jason Nelson manage to do it this time around – the magic that the best of Mythic Minis-files exude does suffuse each and every feat herein -not one is a straight, boring numerical escalation. They are complex and utilize complex stratagems to deliver new tactical options that are glorious indeed. One of the best Mythic Minis to date and an easy 5 stars + seal of approval recommendation!

You can get this cool mythic mini here on OBS!