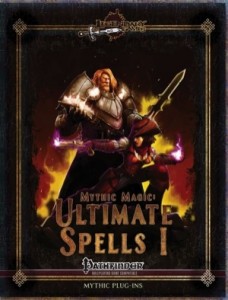 This installment of the Mythic Magic-series clocks in at 32 pages, 1 page front cover, 1 page editorial, 1 page SRD, 1 page linked ToC (allowing you to jump immediately to the spell you’re looking for!), 2 pages introduction, 2 pages of advertisement and 1 page back cover, leaving us with 23 pages of pure content, so let’s take a look!

So here we go – Mythic Magic, once again, thanks to Legendary Games’ exceedingly successful kickstarter. But what does that mean? Well, as we all know, Paizo makes per se great rules-systems…but the support for them, due to a need to also cater to the core-audience, not always is enough for the discerning gamer – take Mythic Adventures. In it, mythic versions of spells were provided…but not for all spells. Legendary Games, back in the day, embarked on the monumental task of filling that gap, providing mythic versions of all the missing core spells and generating thus essentially an all but required book, core by any standard but name, for any mythic campaign.

Fast forward to this book – and here we receive the take on ALL the missing spells from paizo’s Ultimate Combat. And if you recall that book’s general innovation regarding spellcasting, you’ll remember communal spells, which allow you to split durations between multiple targets. Now the mythic versions of those spells allow you to freely distribute the duration of communal spells – 1 round here, 3 there – no problem. The concise and easy to grasp rules-explanation at the beginning thus allows for a significantly increased flexibility and avoids the very first significant pitfall, while also providing generally valid guidelines to “mythify” your own homebrew communal spells with a nice table of minimum durations per target as determined by spell duration – really neat to not be required to deduce this from the presentation of individual spells – kudos! The feat required for this, including the option to share duration after the spell has been cast makes for damn cool roleplaying – after all, we all can remember one scene or another from literature, movies or games, where the magical/psionic defense of xyz gets stretched thinner and thinner by the amount of people protected.

After an alphabetical list of spells (with hyperlinks for those spells already covered in Mythic Adventures – NICE!) we hence delve into the spells – and immediately notice something: Flexibility. Absorb Toxicity, for example, is improved at 6th and 9th tier, receiving different options to power the spell with mythic power at the respective levels. Now if you expect a lame linear manner of crafting these spells, you’ll be surprised – the means with which they have been upgraded are surprisingly diverse.

Let’s stick with “A” for now – Adjuring Step receives an increased duration and makes you less prone to AoOs as long as you limit your movement to 5 ft. or less per action, while also providing at 4th tier augment that protects adjacent allies from AoO-provoking for 2 mythic power uses. Abundant Ammunition, on the other hand, extends its effects to a whole area and does not require the expenditure of mythic power to do so. Other spells are significantly modified – adoration receives a sanctuary-like effect built in and also has its bonus increased by mythic tier.
Generally, quite a few spells dramatically change the way they work and can be applied – mythic power that renders air bubbles helpful to other characters, for example – or what about adding a minor buff to a bestowed weapon proficiency? What about a 50% fortification and increased AC-bonus for bullet shields? Or perhaps you want a version of Brow Gasher that does not end when discharged? If Burst of Speed struck you as one-dimensional, +30 ft and the option to augment it to temporarily spring attack and/or even more speed should do the trick. Compel Hostility also deserves an explicit shout-out – adding a 5-ft step to the immediate action is rather cool – after all, its AoE is extended by that range… Speaking of target modification – why not dampen whole ammunition pouches?

Also pretty cool – the option to dismiss Debilitating Portent and have it immediately deal wis-damage. Beyond increased damage capacity of fiery shuriken, a debuff added for adjacent attacking creatures could well save your hide. Now not all of them are perfect – Find Quarry receives an increased AoE, but also allows you to ignore 10 ft. of difficult terrain sans slowing per round. Yes, this is in no way overpowered, but it does practically demand to be gamed into “this is my difficult terrain-ignore enhancer.”

It should be noted, though, that hiccups like this generally remain the exception to the rule – and e.g. Hostile Juxtaposition’s 5th tier augment for a second switch is tactical gold. What about having your Frost Fall expand each round to further adjacent 5-ft-squares for a kind of cold wildfire? I also am in love with Judgment Light, which features not only a free judgment (not counting against your limit) if cast for the first time, but which also has wildly diverging effects depending on the judgment chosen – damn modular, versatile and awesome! It should also be noted that the spells themselves and their relative power-level have obviously been considered thoroughly while designing these mythic versions, meaning that e.g. the rather powerful litany-spells do not receive a massive flexibility/power-update, just a moderate one as appropriate for mythic characters. I particularly liked the option to dictate one of the non-acting-normal-effects of Litany of Madness – can you see the madman directing the tune of the gibbering fools?

Now there is a reason why not all spells from Ultimate Combat are easily available in my game, with locate weakness being a particular pet-peeve of mine – when crunch replaces legwork and roleplaying, i tend to get annoyed, so it’s perhaps due to this gripe that I can’t warm to revealing all weaknesses of creatures within 30 ft. AND + tier to confirmation rolls, but that may very well be just me.

Another star would be the mythic Mutagenic Touch, which allows you to retain the effects of a shared mutagen, via mythic power – think “communal mutagen.” Now if you can’t see the disturbing storytelling potential, allow me to assist you – the augment allows you to add charm person or reckless infatuation to the effect – “Come, my blessed children of the fluid form, and embrace the bliss of my touch…” *shudder* AWESOME! I also consider the fact that Obsidian Flow does not immediately cool something in favor of the spells herein and violating a mythic peacebond is a) hard and b) helps those who’d clobber the offender to his/her senses. I also enjoy the effect that allows you to share the reloading expertise of reloading hands for a less abstract, more physical feel of the pooled reloading effects – as well as rewarding smart tactics à la “Shoot and move to me, my hands will reload for you..:” Both tactically AND fluff-wise more versatile, resinous skin not allows you to produce globs of tanglefoot-like slime or even exude it reflexively. More on the tactically interesting side would be the symbol of striking’s increased range and reach and the option to further exchange duration for even more reach for much tighter and versatile battlefield control. Alas, the text does confuse it at one point with a symbol of death, though not in a way that would hamper the understanding of the context. Now with mythic rules providing quite a few tricks to receive percentile negating effects like fortification unerring weapon’s option to diminish this immunity makes sense and +1/2 mythic tier to atk, damage, CMB and CMD make your wilderness soldiers more formidable even before extending the command actions for them to also include move actions.

Using mythic power to enchant wreaths of blades and even have them potentially gain special weapon qualities should ensure that you have the right tools for the job.

Editing and formatting are good, but not as tight as I’ve come to expect from legendary Games – I noticed quite a few cut copy paste errors – like the aforementioned glitch with the symbol, communal ant haul referring to air walk and similar minor nuisances. Layout adheres to Legendary Games’ two-column full-color standard full of great artworks, though fans of LG will know most from other publications. A layout nitpick – there are some minor bolding glitches here and there and the bracketed tier-denominator for augments for chain of perdition has slipped down a couple of lines. Regarding these, I also noticed a minor layout glitch – they start the letters of “3rd” etc. off as superscript and halfway through the book change that to non-superscript – again, not a serious glitch, but since some people are bound to be annoyed by it… The pdf comes fully bookmarked with an uncommon twist on bookmarks – they are upside down – i.e. the highest bookmarks refer to the last letters in the alphabet. While slightly confusing at first, I actually came to enjoy this, whether it’s a glitch or intentional. Why? Because you open the pdf on page 1 and have an easy jump towards the end for a navigation that went fast and well. Slightly annoying, though, would be that e.g. the bookmark to Qualm is not in the right place in the alphabet. The pdf’s excessive hyperlinks on the other hand constitute a massive comfort-bonus, especially since they seem to have been properly handcrafted, with no “will”-futures referring to will-saves and similar issues that tend to haunt automatically generated hyperlinks – kudos for going the extra mile.

Jason Nelson and Jonathan H. Keith have accomplished a task herein that I do *NOT* envy them – making this many mythic upgrades of spells is simply a task that requires true passion AND a more than solid work-ethic. Why? Because settling for simple “add + tier bonus”-solutions are pretty rare in this book, instead taking the peculiarities of the respective spells into account for unique, versatile and rewarding modifications that more often than not increase the options of the basic spell in interesting, compelling manners. The general level of aptitude herein is significant and the creativity beyond what I would have expected to find – which is particularly interesting when taking into account how Ultimate Combat’s base spells tend to be eyed with some slight skepticism. This pdf should level the playing field more when using them with mythic rules. Now I am not going to judge the base spells per se (since this book is not responsible for them), but rather what has been done with the base spells and that is damn impressive. While a couple of small hiccups and tricks to cheese a tiny minority of the spells are here, that does remain the exception. In conjunction with the slightly more glitchy editing, though, I can’t go higher than 4.5 stars, rounded down to 4, though, as much as I’d like to. That being said – if your mythic campaign uses Ultimate Combat’s spells, this is a non-optional book and the varied, cool and unique options definitely can be considered well-crafted, with especially the general communal spellcasting framework being absolutely awesome.

You can get this all-but compulsory compilation of mythic spells here on OBS and here on d20pfsrd.com’s shop!