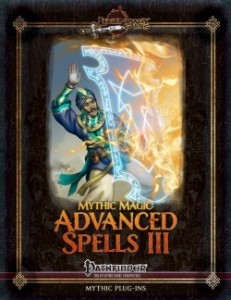 This installment of Mythic Magic-upgrades for the big Paizo hardcovers clocks in at 30 pages, 1 page front cover, 1 page editorial, 1 page SRD, 2 pages of ToC, 2 pages of introduction, 1 page advertisement, 1 page back cover, which leaves us with 21 pages of content, so let’s take a look!

So, this time around, we take a look at the spells featured in one of my least favorite Paizo hardcover released so far, the Advanced Class Guide. Much like in my review for the supplement dealing with the ARG, I am not going to judge the content herein on the virtues of the source material on which it builds (or the lack of balance thereof), instead trying to judge this on the merit of its upgrade to the existing material.

All right, that out of the way, we begin, beyond the internally linked list of spells with a handy list of spells ordered by alphabetical appearance. As has become the tradition with these pdfs, the respective spells can be roughly separated into several categories. The first would be numerical escalation: Greater aggressive thundercloud, for example, increases damage output and even adds a minor, save-negated negative condition. (On a nitpicky side, the non-greater version of the spell’s augment references flaming sphere instead of aggressive thundercloud – though this typo does not impede functionality.)

Other spells extend the tactical options – Communal Align Weapon, for example, adds further bonuses and ignores a scaling amount of damage reduction, but the augment (6th)-option also adds the respective special weapon ability for the respective alignment – axiomatic, unholy – you get the idea. Aura Sight’s mythic version adds a skill bonus and mitigates the line of sight requirement. Bloatbomb receives a pretty high chance of killing the target and makes the corpse it leaves remain a volatile threat to any subject to its vile effects. Similarly, targets provide for an interesting means of modification: Blurred Movement, for example, can now be cast at range of touch beyond also increasing the potency of its effects.

There also are spell-upgrades herein that are closer to their real world mythology’s inspirations, with climbing beanstalk being closer to Jack’s story. Personally, I consider Contingent Scroll ignoring the spell-list restriction somewhat problematic, but that may ultimately just be me being overly cautious due to years of heavily UMD-ing players. On the plus-side, dimensional bounce is awesome: It lets you either choose more locations or decrease the locations available at the expense of a longer range in two steps, enhancing flexibility and granting the spell a new tactical dimension.

Flexible Fury can also potentially cause minor issues – the spell allows for the exchange of multiple rage powers, which may even act as prereqs for one another; however, at higher levels, the augment allows for the permanent exchange of rage powers, which can potentially cause issues. On the plus-side, multiple-use hex glyphs (or greater ones that can store multiple hexes) is pretty cool. Long Arm is pretty brutal – its duration can be consumed faster for increased reach, it can be applied to other characters and casting it on yourself is only a swift action – if that doesn’t seem like much, start thinking what you can do with it…Bingo. Clinging damage is another theme featured in some of the spells herein. Sickening Entanglement is a bit odd, in that its poisonous, Dex-damage causing sap has no save AND does not declare its damage as a poison-effect, which is somewhat odd. The dual-maneuver using thunderstomp gets discrepancies between CMDs right, which is nice to see. I also really liked triggered suggestion’s potential for AoE-effects. Similarly, senses dampening walls of blindness/deafness have intriguing effects, affecting even creatures only nearby.

Editing and formatting are very good, though not as almost perfect as in most Legendary Games-supplements. Layout adheres to Legendary Games’ two-column full-color standard for Mythic plugins and the pdf comes fully bookmarked for your convenience. The pdf provides internal linking for quick navigation as well. Artwork-wise, this book sports several rather neat pieces of gorgeous pieces of full-color artwork.

Jason Nelson has, at this point, my utmost respect for making these pdfs – I honestly can’t fathom how much work it takes to convert all those spells and check them for internal consistency. This is not regular design work, this is a trooper’s work and I am truly thankful for these mythic magic-books – mainly because I can’t fathom a mythic campaign sans LG’s material. So yes, if you’re using the spells from the ACG in a mythic context, this book is basically a no-brainer must-own book. Now, while I am not a big fan of the ACG, some rare instances of spells herein feel like they are a bit too much for my game, but the vast majority of the content herein is rock solid in any mythic context. Hence, my final verdict will clock in at 4.5 stars, rounded down to 4 for the purpose of this platform.

You can get this pdf here on OBS and here on d20pfsrd.com’s shop!
Endzeitgeist out.