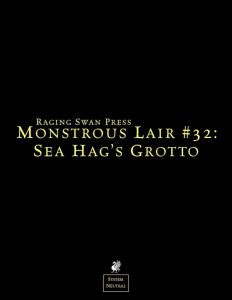 So, the approach to a sea hag’s lair can feature treacherous undercurrents, ensnaring seaweed, shells of monstrous crabs housing aggressive fish and the like – this time, we thus emphasize the nature aspect a bit more, though sigils and anchors embedded in cavern walls also hint at the magical aspect. It’s a good table, if perhaps not as strong as the one for green hags. As for what’s going on, here, the pdf shines once more in some entries: Sea hags slouching on thrones of rotten wood and bone, while tended to by blind servants? Yeah, makes sense. In contrast, sifting through tribute is a theme that’s featured twice, and both entries aren’t particularly compelling, particularly when contrasted against the other entries in the table: When you see a sea hag dancing to a melody of bones and skulls hitting rocks in the current! That’s what I’m talking about! Instant awesome!

The major lair features are appropriately grisly: We e.g. have rotting corpses floating on the surfaces, drifting via hot air, as though in a huge, disgusting soup. Prisoners in air pockets are a solid, if not brilliant complication, and thrones from figureheads, altars of spiked corals and similar foci are also neat. The current carrying drowned cat? That’s neither a major lair feature, nor interesting – just sad. Minor lair features include once more hot air, only this time manifesting as poisonous fumes, hundreds of rotting hands and arms nailed to the walls – yeah, this is neat dressing.

The appearance table is interesting: Rotten and bloated, the hag might disguise herself as a bloated carcass, and what about a cloak of graving octopus/squid skins, blends of sickly bruises, floating, bloated skin – some gems here. I wasn’t as blown away from e.g. a dress of shredded skin, but that may be me. The treasure table includes a siren’s shawl, a dagger that enhances your speed underwater, cauldrons that mumble profane chants and pearl-embossed kraken-skin armor – I liked this table. The miscellanea includes primarily flotsam of various degrees and damage.

I probably shouldn’t have read this back to back with the Green hag installment – Steve Hood delivers a good, inexpensive hag dressing file here, but it is evident that he had less ideas for the sea hag than for the green variety, which was stunning to me, as, mechanically, sea hags do offer more angles. Don’t get me wrong – each table herein has a couple of good ideas, but there are also a couple of instances here where the dressing felt less exciting, particularly in contrast with the superb Green Hag-installment. As such, my final verdict will be 4 stars.