Monster Menagerie: A Council of Genies

Monster Menagerie: A Council of Genies 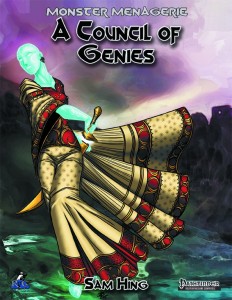 This installment of Rogue Genius Games’ Monster Menagerie-series clocks in at 27 pages, 1 page front cover, 1 page editorial/ToC, 1 page SRD, 1 page back cover, leaving us with 23 pages of content, so let’s take a look!

After a brief introductory page on the subject matter, the first creature featured herein would be the CR 6 Afara, genies of ash with a significant array of unique tricks – beyond being able to assume ashen form and increasing damage output, the sport a powerful retributive aura that may cause nearby creatures to choke as well as the option to spit embers. There are some minor inconsistencies here, though – the choking aura should imho have its save governed by Constitution or Charisma for more powerful afara, but that’s just me being picky. More importantly, the ember spit should probably cause fire damage rather than untyped damage. The failure to properly codify elemental damage caused, unfortunately, extends to other genies as well – the CR 12 Electricus’ arcing aura should clearly deal electricity damage; it doesn’t. It’s untyped damage. This extends to the ability to use said aura to ground and the creature even manages to get basic damage type wording in an admittedly cosmetic glitch wrong: It’s “electricity damage”, not “electrical damage” that should be added to their attacks – a glitch that extends further to other abilities, btw.

The CR 18 negative energy-themed Guayota has a Black Breath, a spinning mass of black energy that drains hp, which can be swallowed again to heal the genie. However, it can be destroyed by “a successful dispel magic or by being targeted by a sunburst or similar magic.” Problem: This is SU, I have no idea of the dispel check’s DC. How does that work with sunburst? Does the cloud move with the genie or does it remain stationary? What in the name of all nine hells are “similar magic”? That’s just plain SLOPPY. The wording of an item-destroying ability lacks an activation action and first grants a save to avoid the broken condition, then RAW doesn’t when it comes to destroying the item.

On the plus-side, the ice-themed CR 7 Hrimthur has a two-save, all 1d4 rounds ice-shard burst aura of cold and piercing that is solid, barring the lack of an activation action, which makes me assume it’s automatic, though the verbiage implies otherwise. The CR 10 Inhabitors are intriguing in that they can hijack constructs and objects, but, alas, their object meld ability lacks an activation action, which is an odd oversight, for the construct-hijacking ability does cover that ground. Mireimer, the CR 4 mud-themed genies receive potentially suffocation-causing criticals that require water of Heal-checks to clear – not much to complain about this guy.

The shadow-based CR 8 obscurial is nasty – they can animate the shadows of foes: If the shadow slays its own, a greater shadow is born; if the owner slays the shadow, s/he is left shadowless and cursed (once again, sporting the wonderful “similar magic” verbiage) and they can make tools of shadow and even solid walls from the material, here with the CL properly taken into account, just fyi. On a slightly nitpicky note – I do believe that shadowcrafting should probably be faster than regular crafting, which it RAW is not. Additionally, how much hardness and hp doe the objects have? If e.g. an object can be fashioned from metal or wood, which one’s stats are used for the sahdow duplicate? No idea.

The CR 5 Prince of Beasts can absorb poison and disease as a carrier and consume the souls of the helpless (creating ghouls) as well as rapidly shapeshift – nice! At CR 2, Spell Fetches horridly overpowered allies for any spellcaster – these guys can store spells and even scour the planes to retrieve and store spells for their masters, which the master then can cast or learn – yes, that’s pretty much infinite spells. Worse, they can even get spells from other spell-lists their masters then can cast. Basically, this is an infinite wild-card scroll character with a minor cool-down…adn since they are available as improved familiars, they have the dubious honor of being the most overpowered familiar I know of.

The CR 7 Tephran can cause 5 foot squares to explode and would be a sadistic magma genie…not much beyond that, but I guess here’s as good a place as any to comment on the fact that additional noble genie rules are provided for most, though not all of the genie herein.

The final creature herein would be the CR 18 Yazata, the positive energy counterpart to the Guayota, who receives a blinding pulse of light and a jittering euphoria-inducing (de)buff that makes concentration and offense pretty hard, but also doubles healing received in a nice duality – over all, a cool one.

Editing and formatting on a formal level are very good; on a rules-level, there are some serious blunders here, though. Layout adheres to Rogue Genius Games’ two-column full-color grimoire-style and is truly a sight to behold – and so are the numerous absolutely awesome original artworks by Jacob Blackmon herein, which inspired me more than any other component herein. The pdf comes fully bookmarked for your convenience.

Sam Hing is a veteran among the designers and I am a bit stumped regarding this book; you see, I was pretty much ecstatic that we’d finally get new, unique genies herein – and there are instances, where the respective creatures are pretty much awesome in concept and flair. On the other hand, there are a lot of issues in here as well – in some instances, wording is simply imprecise, while in others, there are obvious and unnecessary minor hiccups. There would be the case of the most overpowered familiar ever…and a creeping sense of either development being aborted halfway through or the author oscillating between good days (making awesome creatures) and pretty bad ones, where mechanics fall flat. I don’t know – but I do know that I went out of this pdf rather disappointed, thinking that the beautiful art and layout and cool concepts would have deserved better. A good GM can sure salvage all creatures herein and they are functioning, but I still feel this falls flat of its own potential and the standard established for this series. My final verdict will hence clock in at 3 stars.

You can get this little monster-pdf here on OBS and here on d20pfsrd.com’s shop.