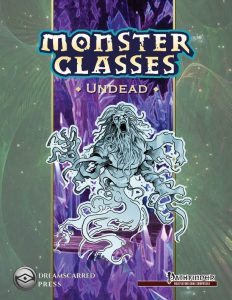 The third installment of the Monster Classes-series clocks in at 11 pages, 1 page front cover, 1 page editorial, 1 page SRD, leaving us with 8 pages of content, so let’s take a look!

This pdf contains two such classes – the first of which would be the Deathless Ghost, who, race trait-wise, gains +2 Int and Dex and is undead with 50 ft. darkvision, normal speed and here things become interesting: Deathless Ghosts aren’t incorporeal per se- they have no Strength-score and use Dex instead and may only benefit from ghost touch armor and no natural armor bonus. They get +4 to Stealth and Perception.

The 3-level racial class gets d8 HD, 4+Int skills,3/4 BAB-progression and good Will-saves, proficiency with simple weapons and begins play with channel resistance +2, which increases to +4 at 3rd level. 1st level also may use a corrupting touch as a standard action, causing 1d6 x HD damage (10 + 1/2 HD + Cha-mod DC), save halves. Not a fan of the untyped damage here, but it’s true to the original creature. The ectoplasmic form nets a 10% miss chance at 1st level, which increases by +10% per class/character level; said chance is halved for spells, magic attacks etc. They gain Cha-mod to AC and 3rd level nets immunity to flight and a 30 ft. perfect maneuverability flight. 2nd level increase the Stealth-check to +8.

Attribute bonus-wise, the racial class gets a total of +4 Cha. Undeath makes fragile and the lack of options to improve via items offsets the powerful tricks this one gains beautifully. Powerful, but not overly so. I like this one!

The pdf also contains a total of 11 feats: These allow deathless ghosts to drain attributes from others, healing themselves. Someone hand me that bag of kittens, please. Urgh. A Frightful Moan, gaining the full incorporeal subtype, possessing foes telekinesis, Poltergeist-style, with a cooldown and high-level Rejuvenation complement the ghost…oh, and have I mentioned manipulating weapons?

There is a feat to use Int or Cha instead of Con for Fort-saves, a cool feat that nets you skill bonuses when you eat brains, gaining a burrow speed…or becoming Old as Dust – which means you’re VERY hard to destroy – and is cool!

As always, we get a nice glossary, but no age-, height or weight table or FCOs/traits.

Editing and formatting are very good on a formal level – no significant complaints. Layout adheres to Dreamscarred Press’ two-column full-color standard and the pdf comes with a second, more printer-friendly version. The artworks are solid and partially stock, but nothing to write home about. The pdf has no bookmarks, but needs none at this point.

Jeffrey Swank’s undead are impressive – particularly the deathless ghost, which screams OP by being incorporeal AND undead actually worked better than expected when picked apart. The ghost is impressive and cool…and I do like the Old as Dust feat – it’s just cool. That being said, there’s the unnecessary, failed kitten-test and the ghoul falls flat on its face in comparison: Kobold Press’ Darakhul are the superior take on playing a ghoul, simple as that. More flavor, more options, better balance. Where does this leave this one? As a nice installment that certainly has more universal appeal than the previous installments. While not perfect, it’s certainly a step in the right direction. My final verdict will hence clock in at 3.5 stars, rounded down to 3 for the purpose of this platform.

You can get the full subscription here on OBS!