Midgard: Player's Guide to the Crossroads 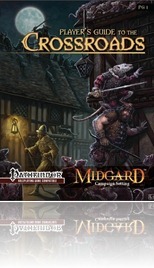 The first in the Player’s Guide-series for Kobold Press’ Midgard Campaign Setting is 36 pages long, 1 page front cover, 1 page editorial/ToC, 1 page SRD, leaving us with 33 pages of content, so let’s check this out!

Tantalizingly hinted at in the Zobeck Gazetteer, I was looking forward quite a bit to this Player’s Guide and let me say here that I’m a huge fan of good player’s guides as I hate giving my players access to all the delicious plot hooks and pieces of information usually contained in a campaign setting or e.g. city setting book like the one on Zobeck. That out of the way, what’s in here?

Well, first we get an overview of the Free City of Zobeck, the Electoral Kingdom of Krakova and the Ironcrag Cantons, Perunalia (The Duchy of Perun’s Daughter), Magdar and of course the Ghoulish Empire under the surface and the dread Principalities of Morgau and Doresh, where the undead rule. Now if you’re a DM, go get the Imperial Gazetteer and the Zobeck Gazetteer ASAP, for while these entries feature pieces of information on gods, populations and short briefs on public people and interesting places, it is there that the truly juicy bits are – and that’s just like a player’s guide should be. Now I have one very minor nitpick here – I do love the Germanic Nomenclature and calling an equinox festival in Morgau "Messern" (essentially German for "Knifing") is awesome, but the midwinter festival of "Verhangnisvoll" should a) read "Verhängnisvoll" and b) does not translate to "Gathering in the Darkness", but rather to "Ominous", "Fatal" or "Cataclysmic" – which is awesome per se, but if you’re as picky with things like that, you may want to be aware of that. Now, don’t get me wrong – I get that in setting, the word can translate to anything, really, but if you’re like me, you’ll probably rename the festival – especially when e.g. a festival like "Vielfraz", a bastardization/pseudo-anachronism of the German word "Vielfrass" evokes perfectly associations with unbound greed, as appropriate to a holy day devoted to Mammon! Now the fact that I complain over such paltry issues should give you pause to ponder on the quality of writing that is at such a high level as to making me resort to it. Yes. it’s that good.

Now, there’s also one page containing adventure hooks for the dark holidays and honestly, I’d love to see a mega-module dealing with these, but I’m not sure these belong in a player’s guide – in my opinion, they should be reserved to a DM’s book, for as soon as they are read, they lose some of the potential for the players.

Now, we get a new crunchy racial options for player characters, the first being the Darakhul, who get +2 to Cha, are small or medium, gain a burrow speed of 10 ft., darkvision 60 ft., channel resistance +2, a 1d8 bite attack and also thankfully weaknesses. Why? Because, if you’re not in the know, Darakhul are undead, to be precise, High Ghouls. Thus, these beings get all the immunities of undead, no con-score etc., but also are have a reverse reaction to positive and negative energy. Furthermore, they suffer from a -4 penalty to skill and ability checks, saving throws and atk while in daylight, -2 when affected by the spell. They also need to eat raw meat every day to avoid suffering from lethal, unhealable damage. Now, if you’re following my reviews, you’ll know that I LOATHE undead player characters in most times. However, I have to admit that while the benefits are significant, the drawbacks should do their part in addition to the social stigma to make this race an option that could be considered balanced. The next new race is the Gearforged, who are clockwork constructs. While I really like the integration of clockwork constructs as deeply into the setting as Zobeck has managed, I also have to compare these to RiP’s Ironborn, NNW’s Replicants and Stormbunny Studios’ Automata, and unfortunately are of these construct races are mechanically more interesting and in my home game, I fear I’ll rather use these. Of course, we also get stats for Kobolds, who get -4 Str, +4 to Dex, -2 to Con, are small, get darkvision 60 ft., +1 natural AC, +2 to Craft (Trapmaking), light sensitivity and proficiency with picks. Nothing to complain here.

After that, we’re off to new character options: Cavaliers may now also belong to the order of the famous Griffon Knights of former House Stross-fame, while paladins may now become members of the Order of the Undying Sun (light and warmth-related abilities) and the Order of the White Lion, who gets modified mercies and a celestial bond at 5th level. Rogues may now take the fixer-archetype and there is also a new base-class, the Shadowsworn. Shadowsworn get d8, 6+Int skills per level, proficiency with simple weapons, hand crossbows, rapiers, saps, short bows and short swords, but not with armors or shields. Shadowsworn may also cast spells of up to 5th level and cast them spontaneously, but use the unusual attribute Int instead of Cha for spontaneous casting. They also get up to +7d6 sneak attacks, 3/4 BAB-progression, a good ref-save and may select from 14 different talents, which I’d expand by giving access to some of SGG’s Shadow Assassin talents. All in all, the class could be summarized as "spellcasting thief with shadow-theme" – a solid class, though one that could use more supplemental material or a unique signature ability beyond some exclusive spells. As provided, it feels a bit lacking and I’d honestly consider the Shadow Assassin by SGG the more interesting class. The class also comes with a spell-list and write-ups of a couple of new spells for the shadowsworn.

Other arcane casters also get fodder – the sorceror being now able to elect to get the ghoul and vampire bloodlines – both actually surprising me with nice abilities like ghoul fever-laden spittle. Nice! Wizards may now get access to the Clockwork and Illumination schools and may add that they are neat indeed – both are balanced and come with multiple nice ones. We are also introduced to new skill uses for Knowledge (Architecture & Engineering) as well as Disable Device and the Craft (Clockworking)-skill and if I haven’t miscounted, we also get 57 new feats – which range from awesome to problematic: Take a firm hand, which allows you to slap unconscious people awake to ricocheting shots to being able to use the Kariv’s Crab-divinations and Trick-Riding as well as figuring whether one lies after tasting the person’s blood. (Vampire red herrings, there we go! Very cool!) Unfortunately, there’s also a rotten apple in here that threatens to spoil the bunch: The harmless-sounding feat "underhanded Strike" is INSANE. Requiring only one feat and a BAB of +6, this allows the character to treat ALL hits versus a foe who is denied his/her/its dex-mod as critical threats. That’s so unbalanced it’s not even funny. How this abomination of a feat could slip past the capable editors and designers of Kobold Press, I have no idea. We also get almost 50 new traits for the areas covered in the book that help immerse the character in the respective setting.

The final pages of the pdf are covered by some dwarven weapons, street weapons appropriate for gangs as well as stats for alchemical smoke bombs and clockwork caltrops and narcotics: Apart from the Akiri Blossom, we also for the first time get PFRPG-stats for the very cool Requiem-drugs introduced in KQ.

Editing and formatting are top-notch, I didn’t notice a single glitch. Layou
t is in full-color, adheres toa 2-column standard and can be considered drop-dead gorgeous, as can the artworks rendered in gorgeous full color. The pdf comes with full nested bookmarks, but no printer-friendly version, which is a bit of a pity.

This Player’s Guide is a good offering indeed – Open Design/Kobold Press has been known for the stellar quality and imaginativeness of their writing and this pdf is no different, providing mostly stellar content – only mostly, though. There’s the broken feat. The comparatively boring Gearforged and the traits, which, while nice, don’t do too exciting things. That being said, there’s some material you’ll recognize from other releases set in Midgard like e.g. "Streets of Zobeck", now compiled for player use, which is also why I won’t complain about them. As much as I like this guide, it still feels like it could have been a tad bit more streamlined, with e.g. the page of hooks being replaced with other content like Gearforged modifications, something rather absent from this pdf and something I’d expect from a construct race. Now, all of this conspires to make this pdf a very good offering, but not a perfect one – hence, I’ll settle on a final verdict of "only" 4.5 stars, rounded down to 4 for the purpose of this platform and still urge you to check this out: When playing in Midgard, this is all but required.

Midgard: Player’s Guide to the Crossroads is available from: