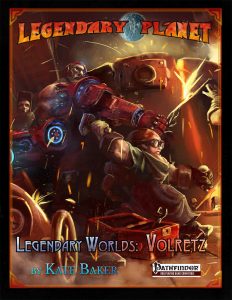 Tiny, and in close orbit to its Sun, Volretz is a glowing, scorching world, where metallic things leap from lava-like oceans of molten metal. The only solid landmasses of this foreboding furnace are situated at the poles, with transitionary areas, the so-called “Ridges” representing a surreal and dangerous ever-changing landscape of perpetually changing metal, as the “oceans” lap and cool against the landmasses, only to be molten anew. This description made me fondly recall the description of Patusan in Joseph Conrad’s fantastic novel Lord Jim regarding the struggle of mankind, but that may just be me.

Anyway, a high metal content in the atmosphere results in stunning sunsets, and a red glow remains even at night; the South pole remains a rocky wasteland, the North pole housing the only civilization of Volretz – the city of Morkansia, dominated by the Morkance Mining Copany, which pioneered a combination of magical and technological heat protection to make life and the exploitation of Volretz’ resources possible. Granted, the entrepreneur also had a hand for sabotage, which most assuredly helped retaining the monopoly on Volretz.

The city is ringed by 8 mining outposts, each manned by approximately 80 men, and 5 massive mobile mining stations sail the globe’s molten oceans. Work there is lucrative, but also dangerous – but at least there is a generous life insurance policy. It should come as no surprise that one mining station, fallen to catastrophic malfunctions, still remains on the southern hemisphere.

Morkansia is fully presented in the supplement, including  fully realized settlement statblock, and a surprisingly well-executed description: From the docks and how they operate to the massive city center with its temple and ginormous foundry, the description not only deserves applause for the ideas (which include the greenbelt, a series of greenhouses and artificial water tanks tended to by divine casters with magic; a casino where you can play games just like the ones at https://www.slotsformoney.com, etc.), but also in how plausible they make this place feel. After reading the section; I not only felt that this makes sense within the logic of the game, but also beyond that – and I could genuinely picture the planet. That’s a good sign! The city does come with a neat full-color map, though, to my chagrin, no player-friendly key-less map has been included.

We btw. get stats for the only creature native to Volretz: The Heavy Metal Elemental! No, unfortunately these elementals don’t embody the music, they embody the metals category, but they do come with a neat artwork and global rules, as well as 6 sample statblocks ranging from CR 1 to CR 11. Minor nitpicks: The statblocks, while generally very good, do sport a hiccup: The Medium version, for example, should have a CMB of +7, not +5 (its CMD and attack values are correct). As a whole, though, I liked these elementals with their forced conduction ability that makes them deadlier when exposed to fire.

Much to my pleasant surprise, we get a detailed breakdown of environmental effects, differentiating between city, northern and southern continent, and oceans – including rules for flaming hailstorms – these detailed rules are great. No complaint, but an observation: As usual in US-centric gaming, temperatures are noted in °F; these mean literally nothing to me, and I always have to remember the conversion formula, tinker with it, etc. – getting an alternate °C-value as well for the cultures accustomed to that would have been nice.

The pdf contains 4 feats: Elemental terror is a combat feat that 1/day as a swift action let you bypass an elemental’s DR/- until the start of your next turn. Other types of DR an elemental may have are reduced by 5. Cool: The feat has scaling, gaining an additional use for every 6 points of BAB. I like this, but personally, I’d grant an additional use for every 2 points of BAB – the application of the feat is already rather specific. Heat-Acclimated does pretty much what it says on the tin, but requires that you live at least one year on Volretz. Minor nitpick: One of two endure elements references in the feat-text is not in italics, but that’s a cosmetic gripe. Water Maker nets you create water as a 1/day SP, +1/day at 6th level and 12th level, with 12th level allowing you to expend all uses to duplicate geyser or hydraulic torrent instead. Ore Dowser lets you 1/day identify a single type of metal and instantly know the direction and distance of the largest agglomeration of it within a mile.

The pdf presents a new 5th-level spell for bloodrager, druid, sorc/wiz and witch, the flaming hail – neat: This spell was ostensibly created by Mortuven Morkance to fake flaming hailstorms when targeting the competition. Cool terrain control spell with damage added for good measure. I like it when magic has some concrete lore attached. Item-wise, we get two types of heat protection suits – light and heavy, both potent, yet affordable, their powers kept in check by their requirement of multiple slots. It’s a relatively simple design, but one that I enjoyed!

The last two pages are devoted to 3 adventure hooks, which deserve special mention for featuring e.g. fluff-only write-ups of a mobile mining station crew, including fire elemental deckhand, and a pretty interesting plot fully sketched out. Or what about solving the attempted murder of Ancrish Illton, the head of the Icebox Casino? These hooks are nice.

Conclusion:
Editing and formatting are very good on a formal level, with the rules language level only slightly behind. Layout adheres to the series’ two-column full-color standard, and the pdf comes with neat original full-color artworks. The pdf comes fully bookmarked for your convenience. The full-color cartography by Michael Tumey is neat, but I’d really have liked to see a key-less version of the city’s map.

Kate Baker’s Volretz made me hum Warframe’s “We All Lift Together” once more; somewhere between themes of exploration and adventure, in almost feels like a temperature-inverted fantasy inversion of tropes associated with Alaska to me. (As an aside: I have never been to Alaska – Alaskan readers, please don’t be offended, my knowledge of your home is second-hand!) There is an inherent sense of plausibility in the writing here, and a well-executed restraint: Volretz is a fantastic planet, and one that has more than one leitmotif, but it doesn’t jam too much into it, thus retaining an identity that is easy to grasp. The same goes for the supplemental material, which makes sense to be there for the planet. The execution of the supplemental material furthermore supplements this. I really liked Volretz, and have only aforementioned minor niggles and the lack of a player-friendly map to complain about…and ultimately, I felt that it wouldn’t be fair to rate this any lower than 4.5 stars, rounded up for that. This is a captivating planet well worth checking out!

The SFRPG-iteration can be found here!

If you consider my reviews to be useful, please consider leaving a donation, or joining my patreon here!