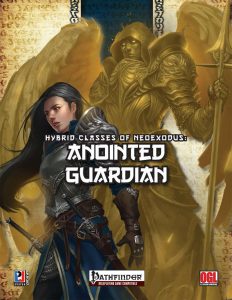 This hybrid class clocks in at 23 pages, 1 page front cover, 1 page SRD, leaving us with 21 pages of content, so let’s take a look!

The anointed guardian class, a hybrid of paladin and unchained summoner, clocks in at d10 HD, 2 + Int skills per level, proficiency with simple and martial weapons as well as light and medium armor and shields, excluding tower shields. The class gets a clerical aura of good, detect evil at-will (with the pala’s move action trick to determine an item/creature’s evilness quicker), full BAB-progression, good Fort- and Will-saves, and at 4th level, prepared spellcasting governed by Charisma (unusual choice) at the usual -3 CL. Spells are drawn from a spell list that incorporates spells from paladin and summoner, with maximum spell level being 4th, akin to the pala.

2nd level nets the grace ability (which sports an erroneous italicization of “bless” in blessing) – the anointed guardian starts the day with Charisma modifier, minimum 1, grace points. The pool is shared by anointed guardian and divine eidolon, and grace is spent to perform benedictions. Some of these are passive, remaining in effect until the final point is spent, while others are active. The term of grace does not really contain anything new: At second level, it encompasses smite evil and lay on hands. The rules-language here is inconsistent: Some abilities call out explicitly that the divine eidolon can use them, while others don’t – however, the termino umbrellone rules-paragraph establishes that these may universally be used by both, which makes the inconsistency more grating to me. Getting Charisma bonus to saves, gained at 5th level, lacks a duration. Also at this level, mercies are gained and scale according to the classic mercy-progression (prior to enfeebled etc. being added), though some of them have been moved around a bit. 4th level yields tactician for use with the divine eidolon, and 7th level and every 3 levels thereafter yield a bonus feat. The capstone is a composite gestalt of eidolon and anointed guardian – this ability, oddly, is called “apotheosis”, which is not, unless I am really wrong (I’m not) what that usually means. It’s also somewhat out of left field. The class treats grace as the singular resource for the pala abilities. The eidolon can smite…and guess what? Grace behaves like grit for evil-aligned enemies. Crits on them and killing them replenishes the shared pool, and both guardian and eidolon can refresh it. THANKFULLY, the refresh-methods come with a caveat that prevents kitten-abuse.

The class gets a divine, good eidolon – while it’s manifested, a glowing run on the forehead of guardian and eidolon set them apart. The divine eidolon does not heal naturally, but life link’s available from 1st level on. Annoying: The divine eidolon does not have the imho rather helpful “no other companions” caveat of the mechanically-superior spiritualist class – a missed chance to improve the base class chassis employed. Divine eidolons have ¾ HD (d10, btw.) and BAB-progression, two good saves, gains 4 skills at first level with ¾ levels netting +4 skill points. Up to 8 feats are gained and AC bonus improves from +0 to +16….sounds familiar? Yeah, unchained eidolon. This includes the abilities like devotion, evasion, link, etc. Skills are the same as well. The pdf lists the aquatic base form from ultimate Magic, the Avian base form from Cohorts & Companions, and two forms taken from Everyman Gaming’s Unchained Eidolons.

As far as subtypes are concerned, Agathion, Angel, Archon, Azata, Celestial Beasts, Foo Creatures and Manasaputra are provided. Oddly, agathion base form is identical to the one from Horror Realms, but lacks the aberrant base form option – once you realize this predates Horror Realms, though, that becomes plausible. Angel, Azata and Archon are old acquaintances, with Foo Creatures and Manapsutra taken from the excellent Everyman Unchained: Eidolons-supplement. Speaking of said supplement: The aligned animal option in that book is imho more interesting than the celestial beast provided within. Oh, and a lot of the new evolutions have been taken straight from that book as well. Armor Training, increased speed, spore cloud, to name a few. Hooves is from Ultimate Magic. Mount is NOT new. Manifest weapon manifests the eidolon with a scaling, aligned weapon.

These eidolon subtypes are also the most pronounced difference between the anointed guardian and the second class herein, the profane marauder. Achaierai, Daemon, Demodand, Demon, Devil, Div, Hell Hound, Kyton, Nightmare and Qlippoth are listed here. Once more, demodand and kyton for example is taken from the Everyman Gaming book. Demon, devil, div, daemon…some previously-released material here. The achaierai eidolon gets a nice, tightly-codified breath weapon. This, and the unlimited breath weapon of the hell hound form (which should probably have a cap) lack activation actions. The nightmare eidolon’s fly speed lacks a maneuverability. There are quite a few missed italicizations.

I’m not going to bore myself or you with once more listing the profane marauder’s class features – they are essentially a palette-swapped antipala-version of the anointed guardian. Class features of the class reference improving class features via feats, none of which are included in the pdf. There are no favored class options or similar supplemental materials included.

Editing and formatting are, considered the amount of text cut-copy-pasted from other sources, surprisingly inconsistent. I found myself neither impressed on a formal, nor on a rules-language level. Layout adheres to the really nice two-column full-color standard of NeoExodus supplements, and the pdf sports a really amazing artwork, as seen on the cover. The pdf comes fully bookmarked for your convenience, and it comes with a second, more printer-friendly version.

Jeff Lee’s anointed guardian is uncharacteristically lackluster in many ways. This is an unbalanced Frankenstein-Gestalt that has not seen playtesting – it’s superior to the pala, lacks means to balance the power the eidolon represents, has rules-hiccups and sports a ridiculous amount of reprinted material. The lack of supplemental material further hurts the class, and the amount of cobbled-together material means that the class never develops anything regarding an identity of its own apart from being a “OMG, KEWL, Ima pala wit ze eidolon 11oneone!!”-angle; the pseudo-grit takes the one interesting resource-management component away, and while the angle is cool and could have resulted in a truly inspired class, the anointed guardian instead opts to create the most bland iteration of its concept possible – sans caring about how its power impacts the game. I can see this work in super high-powered games or solo-play, but even then, the design is simply not interesting or distinct. This feels, ironically, soulless and cynical. My final verdict will clock in at 2 stars.