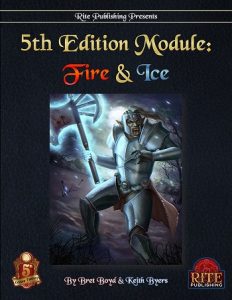 This module for 5e clocks in at 18 pages, 1 page front cover, 1 page editorial, 1 page SRD, 2 pages of advertisement, leaving us with 13 pages of content, so let’s take a look, shall we?

In the original iteration, this was represented with a variety of unique rules-operations and they have been translated here – but the conversion, as a whole, does stumble…quite a bit. One look at the statblocks in the back shows several immediately apparent deviations from 5e-statblock formatting conventions in the details; similarly, Malkin’s demi-eternal ability is still defined as (Su) – something that does not exist in 5e. Similarly, average damage, italicization and the like are mostly absent from the module’s statblocks; we have colons where full-stops should be. The immortal ability of the assassin refers to itself as “eternal creature” analogue to the original template, demi-eternal and demi-ternal. In one paragraph. Urgh. Damage dice aren’t properly formatted either…I can go on. Now usually, I’d leave that right there…but guess what? There is a bolded note regarding the save to make as the ice hits the ship. It’s BOLDED. It sticks out in the text. It refers to a Reflex save and has an erroneously bolded partial sentence.

Upon temporarily defeating the threat, the poor survivor comes clean and asks the PCs for aid and so they’re off to the island of pleasure, Mibre – including a gorgeous map, mind you. This place is a small paradise, where an order of enigmatic monks poses an interesting puzzle (including trouble-shooting advice and means t brute-force it) – here, the conversion is working as intended. The strange order of monks living here will prove to be pretty important, for without their help, the PCs will have a hard time bringing the magical crystal to the plane of fire to sunder it and thwart the plans of the evil cabal. Only by understanding the monks and participating in their tests (sans being killed by the cabal’s forces!) do they have a solid chance to destroy the crystal in the plane of fire. Unfortunately, the details of the conversion feature more issues – when e.g. PCs get, for a while, the “construct traits”, GMs for 5e are left scratching their heads. Is the constructed nature feature meant?

Editing and formatting are NOT up to the standard I expect from Rite Publishing; this pdf sports a significant array of conversion relics that even casual observation MUST catch. Come on – the ONE bolded section on a page and it’s wrong?? *Shakes head* Layout adheres to Rite Publishing’s two-column full-color standard and the pdf comes fully bookmarked with nested bookmarks. The artworks featured are solid full-color and the cartography by Tommi Salama is nice, though the absence of the *existing* high-res map-versions feels odd; indeed, since they act as handouts/ready to go, the rather small depictions of the maps in this iteration of the module is odd – in the Mibre map, you can barely make out the places!

This is one of those heart-rending experiences; you see, in spite of the elemental theme, I actually really like Bret Boyd’s module here; and one could have done a worse job converting it to 5e.

…I can’t do this. Yes, it always could be worse. But guess what? When I did my very first *rough draft* of a 5e-conversion, it had less formal glitches in it than this book. Quite literally one prolonged and analytical glance at the formatting peculiarities of 5e would suffice here. Worse, the hiccups aren’t purely aesthetic in nature, but drag their baggage into the very mechanics the module uses. Can you run this as written? Yes. But if you’re like me, you’ll have to acknowledge that the module’s conversion is in dire need of an editor/developer who actually knows 5e’s formal requirements. This does not do.

And it is a pity, for the module is not bad; in fact, I really like it in spite of the elemental theme, something usually not particularly near and dear to my heart. Still, this conversion is a great example of a good module dragged down by the less than stellar attention that was given to its conversion, to the point where the merits of the module’s ideas and story are the one saving grace of it; from the lack of the existing high-res maps to the conversion issues, this one’s formal properties are an uncharacteristic mess when compared to just about all Rite Publishing offerings, including other 5e-conversions. The module’s story and ideas are all that make me round up from a final verdict of 1.5 stars. If you’re willing to look past its issues, there is fun to be had here; if formal precision is something even remotely dear to your heart or the lack of the high-res maps annoys you, then beware.