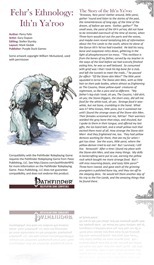 This pdf from Purple Duck Games is 8 pages long, 1 page SRD and 1/2 a page artwork and editorial, leaving 6 1/2 pages of content for the Ith’n Ya’roo…so what exactly are these beings?

The Ith’n Ya’roo are an interesting new race that capitalizes on a the idea of regression – via mating with yetis, humans have transformed into these strange humanoids. If you now expect another evil culture to abhor, you’ll be in for a surprise, though – the Ith’n Ya’roo are actually epitomes of the noble savage, being mostly LG and suitable as a PC-race. While their customs include cannibalism, there is no taboo in being eaten and in fact, the usage of one’s bones in the crafting of a tribe is considered to be a great honor, especially for weapons – for the Ith’n Ya’roo are perhaps the best bonecrafters in the known world – thus rules for bone weapons and armour are part of the deal.

The horned, tall, shaggy-furred Ith’n Ya’roo get +2 Str and Wis, -4 Int, are monstrous humanoids, medium, gain darkvision, +2 natural armour, hooked horns for a 1d6-natural attack, resistance to cold 5, vulnerability to fire, a bonus on craft checks related to bone and the ability to cast a new spell from this pdf 2/day. While they are fearsome-looking and culturally limited, I think DMs should be careful when allowing such a PC – over all, their abilities seem to be very strong and should be balanced via social stigmata or the like.

ESPECIALLY when using one of the 4 racial traits, or 6 alternate racial traits, some of which are simply OP: Yaroo Bloodspear grants you the Splintering Weapon FEAT. Trait. Feat. There’s supposed to be a difference in power, isn’t there?. Worse, the Blue Hair alternate trait makes them IMMUNE AGAINST COLD. A trait. Immunity against one whole energy type. At first level. Not gonna happen in my game. Ever. Another trait, where I doubt the usability, is Growler: You sacrifice your starting languages for a 1d3 bite attack. that’s worse than the horns. And it’s not clear whether this is a primary or secondary natural attack. Either way, it doesn’t do enough damage when compared to the attack the race already has. The ability to use a trait to cast icicle dagger and shield simultaneously is also to powerful for a trait. Or it would be if it specified what action this special casting takes – the information is missing.

The 4 racial feats, when compared to the traits, fall almost insultingly flat and range from an ice-based version of stonecunning to using Wis as governing attribute for two of your knowledge skills. Especially when directly compared to the traits, these feats feel like they are actually too weak. We also get 8 favoured class alternatives, a discussion on how they relate to classes, but no information on an age, height and weight table, which is a bummer. Instead we get another trait, 2 spells (an icicle dagger and one to reinforce temporarily brittle bone equipment) and a sample NPC.

Said sample NPC, I gladly admit, is my favourite piece of the pdf – an Ith’n Ya’roo alchemist who uses acid-filled bladders instead of exploding flasks and who is a refreshingly non-optimized build. If I do use them in my campaign, I’ll be sure to include this cool alchemist.

Editing and formatting are very good, though some rules need clarification. Layout adheres to PDG’s printer-friendly 2-column standard and also features a truly beautiful full-colour artwork I didn’t expect to see at this price-point. The pdf comes fully bookmarked, which is another plus. I’m kinda torn on the Ith’n Ya’roo – on the one hand, I love how the fear of degenerating into something wild has been married to the stereotype of the noble savage and what I could glean from their culture interested me. However, their bonecrafting remains somewhat underutilized and, moreover, the race suffers from what I’d call a bit wonky balancing – as written, a DM should be willing to put some stones in the way of the Ith’n Ya’roo PC in order to counteract the increased power when compared to the core-races. And then there are the broken traits. And I mean BROKEN. I like powerful traits that matter, I really do. But they have to be restricted in order to remain what they are supposed to be. Good examples would be RiP’s “101 Pirate & Privateer”-traits. In contrast, the Ith’n Ya’roo traits are almost ridiculously powerful, while their racial feats frankly suck. All in all, I’m missing the crucial age, height and weight-table (when do they crash through the ice?), perhaps some unique items and some fleshing out of the whole culture (what about starting wealth?). On the other hand, the pdf is very cheap. Going over it again and again, I can’t bring myself to rate this higher than 2.5 stars, though – there are too many mechanical hick-ups that add up and tarnish the per se great idea of the race. Unfortunately, I feel like I have to round down for that one.