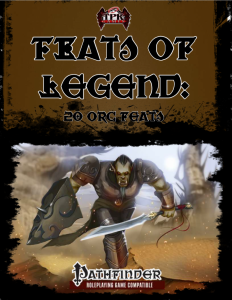 -Fight Impulse: 1/day enter rage as an immediate action as a response to a fear effect, provided you can enter it. Solid.

-Focused Fury: 1/rage make a full-attack as though you used Power Attack, but sans penalties. Benefits do not apply to AoOs. While nasty for rage-cycling builds, these already constitute cheesy builds, so yeah.

-Hachetman: Treat handaxes as though they were a warpriest sacred weapon at -4 levels.

-Iron Fist: Gain a slam attack, properly codified as primary; may be taken again for a second slam attack.

-Language of Power: +1 DC for all evocations when casting while speaking orc. Minor complaint: The wording would be clearer if the pdf just specified that the bonus applies to spells with verbal components only; “Speaking orc” covers that, yes, but RAW, you could try to speak a somatic-only spell that way and the interaction becomes a bit wobbly. This is, however, a purely aesthetic gripe.

-Mountaineer: Gain climb speed equal to 1/2 base speed while wearing light or no armor.

-Lockjaw: Requires a bite attack and lets you execute it as part of maintaining a grapple; if you hit, you gain a bonus to maintain it.

-One with the Night: Nets Stealth bonus as well as +1d6 damage versus flat-footed allies in areas of dim light or darkness – should probably be codified as precision damage. Kudos: Does not apply to spells – nice cheese avoidance there.

-Scent of Evil: Detect evil (not properly italicized) as a conical SP, as you can literally smell evil.

-Second Wind:1/day as a swift action remove the fatigued condition, +1/day use at 5th level, capping at Con-mod. Nice!

-Shaman’s Apprentice: +2 initiative, +4 to concentration checks to defensively cast cure-spells. “Cure” is not italicized, so not sure if only the spells with it in the name, or conjuration [healing] spells in general are meant.

-Sheathing the Blade: If you have a free hand (you may drop held objects as an immediate action) and an enemy crits you, you may make a disarm attempt as an AoO that is resolved AFTER the attack. Complex, evocative, cool!

-Take You Down With Me: You gain a final AoO upon being reduced to or below 0 hp, even if the attack kills you. This is also resolved after the attack reduced you to 0 hp or below.

-Troll Blood: Gain increased healing when subjected to it, have a 50% chance to stop bleeding…but also take slightly more damage from acid and lose this ability temporarily when doing so. Cool!

-Troll Flesh: Gain fast healing 1 when unconscious, but lose this feat and the previous feat’s benefits for 3 rounds when taking fire damage. Cool!

-Vicious Wounds: Add +1d6 bleed damage when hitting a foe with a light or one-handed piercing weapon while the foe is flat-footed or flanked. Nice!

-Words of Power: Cast all evocation spells with verbal components at +1 CL if you speak orc while casting them.

Editing and formatting are very good, I noticed no glaring issues in rules-language or formal criteria. Layout adheres to a nice 2-column full-color standard and the pdf sports two gorgeous orc-artworks in full color. Big plus: The pdf comes fully bookmarked, with each feat properly bookmarked. Kudos!

Neal Litherland delivers something rather impressive – a feat-book, at this stage in the game, that I actually consider worth getting. I’m not kidding you – even after all of these feat-books I’ve read, I consider this worthwhile: While not every feat herein is brilliant, they all have something going for them – either by virtue of being interesting, flavorful, or both. As a whole, I consider this very much worthwhile and worthy of a final verdict of 4.5 stars, rounded up for the purpose of this platform. Kudos!