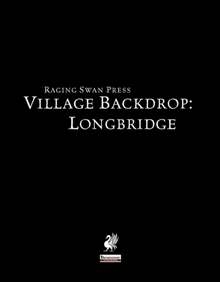 This installment of the Village Backdrop-series is 13 pages long, 1 page front cover, 1 page advertisement, 2 pages of editorial, 1 page ToC/foreword, 1 page SRD, 1 page advice on how to read statblocks for novice DMs and 1 page back cover, leaving us with 5 pages of content – so let’s take a look whether Longbridge can maintain the streak of consecutive 5-star+seal of approval ratings the last installments of the series had!

Longbridge is, much like Riverrun, crucial to the crossing of a particular river – only that a) it’s smaller and b) its leadership is divided – claimed by both Wido Gall and Hilduin Lorsch, two sets of taxes, laws and regulations have made Longbridge a hotbed of intrigue and a powder keg whose fuse has been lit – it’s just a matter of time before it blows – especially with Einhard Kochel, leader of the free merchants seeking to claim control for himself…

Following the tradition of the series, longbridge gets a beautiful b/w-map as well as village statblocks (Danger +5 – ouch!), a well-studded marketplace, a lore-section and 6 different whispers and rumors as well as notes on the type of folk that can be found in the settlement and their nomenclature.

9 notable locations have been provided for the town alongside a stunning b/w-rendition of it and three statblocks – one for Donatus Trond, Hilduin’s enforcer/chief investigator and one for Rilla Omer, a beautiful court bard who acts as a bailiff and is in control of the southern part of the village. Finally, Einhard Kochel also gets his own stats – he’ll probably need them if push comes to shove…

The 6 sample events in the village represent well the tension that suffuses the village, whereas the 4 sample travelers (fluffy table entries only) help enforce the commercial importance of the town.

Editing and formatting are top-notch, I didn’t notice any glitches. Layout adheres to RSP’s two-column b/w-standard and the pdf comes fully bookmarked for your convenience and in two versions, one optimized for screen-use and one to be printed out. As with all Village Backdrops, I urge you to go to Raging Swan Press’ homepage and download the player-friendly version of the town’s map as a handout.

Creighton Broadhurst, mastermind of Raging Swan Press, publishes not nearly enough of his own designs – this village is yet another stellar example of why I stand by this statement: Creighton GETS relatively realistic, gritty fantasy. Almost all Raging Swan Press offerings are suffused by a sense of historicity often times lost in the more fantastic offerings and this village is no exception – oozing a sense of authenticity, this settlement comes alive on its pages – in spite of the relative brevity of the supplement. Add to that the great artwork, the awesome map and the sheer potential of the volatile situation and we have a place suited for violent insurrection as well as politics on a locale scale – and everything in between. My only gripe would be that I would have loved this to be a full-blown 32-page town-supplement rather than “just” a village. Final verdict? 5 stars + seal of approval.