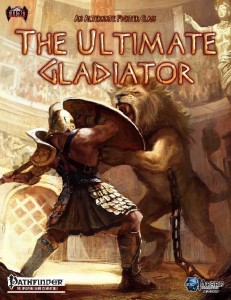 This alternate fighter class by TPK Games clocks in at 42 pages, 1 page front cover, 1 page editorial, 1 page advertisement, 1 page SRD and 1 page almost blank bar one trait, so I’m counting that one as blank for a total of 37 pages of content, so let’s take a look, shall we?

Gladiators represent a melee-centric class loosely based on the fighter. They receive d12, good fort- and ref-saves, full BAB progression, 2+Int skills per level, but only proficiency with light armors and shields (not tower shields) and simple and martial weapons. It should be noted that the pdf also covers rules for gladiators using piecemeal armor, which is nice to see. Gladiators treat all weapons they have proficiency in as if they had the performance weapon quality and receive bonus feats at 1st level and every even level thereafter – these must be chosen from the list of combat, performance or teamwork feats. Beyond these, there is an option for bonus feats the class receives, the flexible bonus feat granted at 4th level and every 4 levels thereafter, which allows for the retraining of one such feat in a relatively short duration, but only if said feat does not act as prerequisite for prestige classes etc. For those not familiar with the retraining rules (or who choose to not use them) a cool ability, for all others unfortunately rather useless, but oh well – the lack of costs and limits mean that, provided he’s got the time, a gladiator may change quite flexibly over the levels.

Gladiators may also select from special talents, which are grouped in three tiers: They receive their first such talent at 2nd level and then proceed to get another one every odd level thereafter. At 7th level, tier 2 of these is unlocked, at level 13 the third tier becomes available for selection. Now beyond what one would expect, there are some of these talents that actually utilize some interesting mechanics with appropriate risk-reward-ratios: Take e.g. buckler catch, which acts as a disarm maneuver with a further +4 bonus on the roll and can only be used when wearing bucklers; However, failure at the roll means by 10 or more you receive a -2 penalty to AC until the start of the gladiator’s next turn.

It should also be noted that the class makes heavy use of victory points (see the rules on performance combat for an elaboration on these) in quite a few talents – expending victory points as a kind of hero points light version, the respective mechanics are nice and provide options both for regular combat and also in the context of deadly bouts in the arena – even defeated gladiators may thus avoid the fate of the thumb down-sign. The respective abilities cover quite an array that allows builds from crowd-pleasers and performers to ruthless killers and more often than not, offers iconic, cool options – shortening grips of polearms? Check. Sharing a bonus teamwork feat with allies? Check. Making attacks with bucklers valid and switching bonuses between light/one-handed weapon and buckler? Check. Subdual damage? Yep. Faster cover via tower shields? Aye. War Paint and all the tricks you’d expect can be found herein and quite probably, a vast bunch more.

Among tier 2 talents, knocking potentially foes unconscious with critical hits is a neat idea as well. Sundering via regular attacks also is an unconventional option, thankfully balanced by action economy and minor autobuffs for successful attacks via a combo point pool also makes for an interesting option. Daily-use limited auto-healing or death-preventing temporary hitpoints, DR-reducing blows – the amount of options is interesting indeed.

I am not a friend of the design decision to allow the swatting of missiles out of the air by succeeding an opposed attack-roll, since I consider the flux of 2d20 to be too big when compared to the usual atk vs. AC. The 3rd tier talent Deep Wound is also odd – treating all max damage rolls as critical threats can be cheesed rather easily with very small weapons, shuriken etc. While the vast majority of the multitudes of talents herein is awesome and cool in some way, black sheep like these unfortunately also have made their way in here and there.

It should be noted that the FCOs here span so much more than one would expect – a whole lot of ARG-races are covered beyond the core races – alas, here some glitches have crept in as well: Ifrits get e.g. 1/5 increase to movement rate. 1/5 of what? 5 ft.? of a transition of 10 feet? No idea.

We also get new archetypes, like the blind helm fighter, the barbaric slave who may wilder in rage powers, the animal trainer gladiator, the agile blade dancer, the gloryhound champion, the sneaky criminal, the huge beast of a man (gigante – damn cool!), the gladiatrix or the quintessential survivor gladiator, the immortal. Yeah, there are 4 more archetypes beyond those I mentioned. That’s variety! Over 30 feats, many of which center along the theme of gladiator combat, achievements and reputations and which really want to make you try those combat styles are provided and a vast array of traits, enough to supplement a full gladiatorial campaign, are also part of the deal.

Editing and formatting are the unfortunate weak point of this pdf – from formal minor nitpicks à la WILL save/will save inconsistencies in the text to some obvious rules-oversights here and there, some glitches have crept into this massive tome. Not many or crippling ones, but they are here to an extent that imho could have been thinned out further. Layout adheres to TPK Games’ printer-friendly two-column standard and the pdf comes extensively and fully bookmarked and also extensively hyperlinked. Artworks range from neat stock I already knew to cool artworks I haven’t seen before.

Brian Berg’s Gladiator (with content by Skip Twitchwell, Joshua Slick and David Miller) admittedly hits a soft spot in my armor – I *love* the base concept and the execution, which could conceivably be mixed with e.g. RGG’s Talented Fighter (and vice versa) makes for a very versatile beast of a class that has A LOT going for it. Cool combat styles and iconic moves bespeak a love of the genre and the utilization of dueling/performance combat rules is something seen all too rarely. Reading this supplement really made me want to run a gladiator-only-campaign; The class with its massive supplemental content would support enough different characters to make the experience not boring or character-wise redundant for the players, which is quite a feat to achieve – so kudos for that. And yes, I *LOVE* this class; I *LOVE* the ideas herein, and yet, I can’t rate this as high as I’d like to – a competent rules-editing that irons out the few issues, a check t0o prevent duplicate mechanics that usually are handled differently – it’s partially cosmetic stuff and here and there simply unnecessary second solutions to already existing rules that, while not rendering the class bad in any way, still manage to make it feel slightly less refined than it ought to be. There aren’t many true glitches herein, but those can be found as well. Rest assured that this is not enough to net this gladiator the dreaded “thumbs down” – the book is too good for that. While I won’t be joining the loudly cheering crowd, I am standing here grinning and clapping at the performance of these gladiators – well worth a final verdict of 4 stars.

You can get this cool class-book here on OBS and here on d20pfsrd.com’s shop.