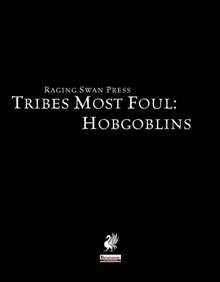 The latest installment in Raging Swan Press‘ Tribes Most Foul-series clocks in at 14 pages, 1 page front cover, 1 page advertisement, 2 pages of editorial, 1 page ToC/foreword, 1 page advice on how to read statblocks for novice DMs, 1 page SRD, 1page back cover, leaving us with 7 pages of content, so let’s take a look!

As we’ve come to expect from the series, this installment introduces us to three different hobgoblin tribes, all with their very own tribal lore, sample NPC(s) and unique cultural background as well as a full tribal roster, so let’s take a look at the respective tribes!

The first one would be the tainted strain (which comes with a GLORIOUS b/w-illustration of their banner!), which is a hodge-podge group  -exiled from superstitious clans or left for dead, the survivors were gathered into an elite array of child savants under the command of a bitetr cripple and, recently, a charismatic, psychotic sorcerer. Worse, they are on the way to destroy an elven enclave and might just camp outside of your PC’s settlements, opening some rather interesting moral quandaries of whether these hobgoblins, often children still, yet blessed with magical talent must be stopped or how to guide them – their children’s crusade will lead to death anyways, but whether their souls can be saved and true massacre be avoided – that’s up to the PCs. And yes, I LOVE storylines like this! The charismatic leader is btw. provided and clocks in at a whopping CR 9 – rather impressive for one not get grown up!

The second tribe introduced is a conglomeration of hobgoblins called Silent Eclipse – these hobgoblins (again, with an awesome banner) come off at rather usual common warbands –until you realize that they do not venerate glorious death in battle, instead striving to survive long enough to join their undead ancestors in the umbral realms. And then there’s the fact that they are led by one Silhouette-Over-Moon – an intelligent giant shadow owl illusionist (CR 10 and fully statted, btw.!) that is the mastermind behind these creatures and engineer of their twisted system of beliefs – again, rather awesome and well-worth introducing into your game.

The Union of Seven, the final tribe, features another VERY interesting characteristic – they are sexually dimorphic, with the males being essentially degenerates of no more than goblin size and prowess, whereas the females essentially make for an amazon-like warrior-caste. They also exhibit a two-class society – there are never more than 7 female champions and only the champions may breed true, and only when there only are 6 or less champions, controlling thus the population of the tribe. With combat-prowess and the restriction of only champions being allowed to breed true, came the slave-caste and mongrelfolk are squealing under the iron-shod heels of their mistresses and mothers, defending the union to the death. The spiritual leader, an advanced qinggong monk is depicted statblock-wise and, again, we get an original, awesome banner. Have I mentioned that ironically, an anti-paladin may make for a valid ally for PCs seeking to bring down the rigid hierarchy of the tribe?

Editing and formatting are top-notch, I didn’t notice any glitches. Layout adheres to Raging Swan Press’ two-column b/w-standard and the pdf comes with awesome b/w-artworks of the tribal banners as well as fully bookmarked and in two versions, one optimized for screen-use and one to be printed out.

David Posener is a talented author – but what he has created here is GLORIOUS – an awesome, cool array of three tribes that is uncommon, culturally distinctive and almost demanding to be introduced into your campaign, each of these tribes is worthy of at least an adventure, potentially so much more. And that is what this series is supposed to be about  – precise and concisely-written, this is one inspiring pdf to have and well worth 5 stars + seal of approval – go get these hobgoblins and let them march on your players – they’ll never see the militant goblinoids in the same light!

You can get these militant tribes of goblinoids here on d20pfsrd.com’s shop and here on OBS!