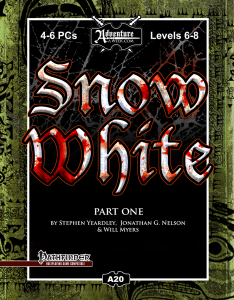 First of all: If you run this module DON’T SHOW YOUR PLAYERS THE COVER. The crew of adventureaweek.com has done quite some research and taken a jumble of different obscure versions of the traditional fairy-tale and blended them together – that being said, they will not necessarily realize they’re playing “Snow-White” – unless you tell them, which I discourage.
This being an adventure-review, the following contains massive SPOILERS. Potential players should jump to the conclusion.

All right, still here? Morsain is a nice little town in the Klavek Kingdom and as such had to pay quite its share of massive taxes – but the town’s fortunes might change soon, as Prince Ruhtin, 4th son of the king, plans on marrying the drop-dead gorgeous daughter of Morsain’s leader, one beauty called Lumi Valka Valtatytar. The wedding between the two is to happen soon and via one of the various hooks, the PCs find themselves employed as additional security for the festivities and the module hence kicks off with a security sweep of the gorgeously mapped castle’s 3 levels. Weirdly, the PCs also find traps – a gazillion of them, progressively harder to disable. By now, they should have the sneaking suspicion that someone is gaging their abilities and plans something – but what?

During the lavishly-detailed festivities, Lumi is promptly poisoned and the PCs may try to determine how the poor girl suffered from the strange catatonic fit by researching the intricately complex multi-component poison she inadvertently ingested – a master-poisoner is obviously at work here. Thus, the PCs, after some questioning, will be on guard duty – only to have swarms of bats and larger dire variants attack and try to make off with the unconscious Lumi. There’s a potential for a neat chase here and it is developed – as is the chance that the PCs manage to stop the bats.

If they do, she’ll recover and be kidnapped right from under the prince’s nose – in the guise of a PC. One man named Wilhelm Jacob as the perpetrator will be found by the PCs – and perish – poisoning himself – unfortunately, he has handed her over to a rider already – using a magic item as well as a clever plan, it is highly doubtful he will be caught by even clever PCs – and I love it if characters actually act smart. The woodland chase for the rider, beyond his misleading horses and falls trails, should be nailbiting – not only due to a rather complex table of obstacles and encounters.

Worse, the huntsman, beset by dwarves, escapes the woods – sans Lumi, her trail going cold for now. Suffice to say, the prince is not particularly pleased. Finding the true identity of the huntsman, the PCs have to capture and surprise the man in his fully mapped cabin. And then, suddenly, albino centipedes pop up, summoned by some eldritch force, to kill the servant now turned liability. Mysteriously, the huntsman seems to have some ties with the castle, notably its catacombs. Upon solving a puzzle-lock, the PCs may encounter more of the weird centipedes in the again, fully mapped catacombs of the castle. Upon thwarting an assassination attempt on them, the PCS will have to prove at least partially their diplomatic mettle and convince the prince they are not responsible for all the misfortunes – thankfully, the Attendant Queen seems to have located Lumi via a scrying device and offers to teleport the PCS to the location: An offer they should be glad to take, since the atmosphere at the castle has turned quite frosty towards them…

Of course, the spell doesn’t send them to Lumi – but to some other place the PCs will not particularly appreciate – and thus, this module ends with a cliffhanger to be continued in part 2.

Editing and formatting re top-notch, I didn’t notice any significant glitches. Layout adheres to a printer-friendly 2-column standard with color-coded boxes for skill/combat/etc.-boxes and white background, rendering the module rather printer-friendly. The artworks range from nice b/w-pencil-drawings of the characters to fitting stock art and the cartography, as always with AaW, is formidable. The module comes with player-friendly high-res versions of all the maps. The pdf comes fully bookmarked and extensively uses nested bookmarks for maximum convenience – Two thumbs up!

When I first heard about this module, I face-palmed – with fairy-tales being as popular as they are for adaptations right now, everyone and his aunt seem to have a new, grim, dark take on the tropes, often failing miserably. *cough* movie *cough* I grew up with the original, rather bloody version of the story and honestly, never could stand most adaptations out there. And then, there is the fact that fairy-tales often make for bad, railroad adventures with clichéd plotlines and cardboard cut-out characters.
Snow-White is none of these things. Even without the mythological yarn that suffuses this adventure’s theme, we get a rather interesting module that breaks multiple conventions of how modules usually play out – from the opening to finish, we get intrigue, uncommon encounters, smart adversaries that actually act as befitting of their Int-score and most of all: A plot that is many things, but neither predictable, nor linear. The chase, the research – all ties in together nicely and makes the PCs actually work for their progress, while still having the chance of not leaving a stupefied group behind.
Yes, Snow-White is an expensive module when looking at the page-count – but authors Stephen Yeardley, Jonathan Nelson and Will Myers have created a yarn that dares to be different, offers something for all kinds of players and is refreshing, innovative and exciting to boot, resulting in one of the finest modules AaW have so far produced and in me being on the edge of my seat, looking forward to seeing whether they can maintain this level of quality in part 2. An exciting, unconventional module that works best when used by a DM with a bit of experience, Snow White Part I deserves a final verdict of 5 stars + seal of approval.

Get this one neat, unconventional module here on OBS!