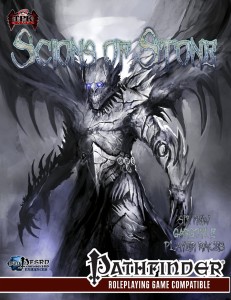 This massive supplement is 98 pages long, 1 page front cover, 1 page editorial, 4 pages ToC, 1 page SRD, leaving us with a massive 92 pages of content, so let’s take a look, shall we!

Bernie McCormick, the author, kciks off this massive supplement with some information on what made him design this supplement, as well as a word of warning on the power of these gargoyles  – via ARG-rules, they clock in at about 20 points. But sinc, personally, I consider the ARG to be broken as all hell, I’ll refrain from taking them apart by these rules and instead show you what these gargoyles can do – and whether they work well in their weight-class. After Rick Cox delivers a neat introductory short story, we hence are introduced to the history of the gargoyle-race – artificially created, the vivid prose here creates a well-considered justification for why gargoyles act as they do.

Before we get into the truly intriguing sections, we kick off with the “basic” standard gargoyle PC-race – the awakened gargoyle: They are slow, get +2 Str, Dex and Con, -4 to Int and -2 to Wis and Cha, are ageless (only their mental attributes improve – no physical decay), get a climb speed of 20 ft and may use their wings to gain a feather fall-like effect. They also get +2 AC, may pose as statues ( take 20 on stealth to hide in plain sight when falling asleep), can manipulate small objects with their prehensile tails and get natural claw attacks at 1d4. And they get 5+ class level SR – twice that amount versus divine magic, which ties neat in the mythology of soulless and created. And yes, this seems strong – but thankfully the race also gets some massive Achilles heels: When in stony slumber, gargoyles take double damage from bludgeoning damage – and that stacks with the +1 per die damage they receive from bludgeoning damage. They also cannot be resurrected or slain and they also need to consume 1/10th of their weight to stave off starvation. OUCH. Though it should be noted, that general awakened gargoyles not adhering to a clan lack the weight information of the clans, so you’d have to scavenge one of these – a minor detriment, but one nonetheless. Oh, and while they can lower their SR for arcane magic, they can’t lower their spell resistance for divine magics, which means  that healing will be massively problematic – a massive drawback indeed and one that imho salvages this race from being plain OP and actually deliver a unique gaming experience. well done!

As all versions of gargoyles herein, basic awakened gargoyles get extensive information on how they interact with other races as well as favored class options for a variety of classes – alchemist, bard, fighter, magus, monk, ranger, rogue, sorcerer, summoner, witch, wizard…and shadow assassin! (A Great base-class by SGG – if you don’t know it, check it out!). We also get a cool CR 7 sample creature built that way.

Now if you were a fan of the by now legendary gargoyles-animated series, you’ll realize at least some partial inspiration for the respective gargoyle clans introduced herein, with the first, the Trumeau, being essentially the leaders of their kind: Trumeau get +2 Str & Con, -2 Wis, flight speed 30 ft at clumsy maneuverability (replacing climb speed and gliding wings) and infernal blood replacing the stony hide of the basic gargoyle), netting cold and acid resistance 5 and treat cha as 2 higher for sorceror class abilities and take +1 damage per die from good or holy sources, replacing the prehensile tail and offsetting the relative power-gain with another weakness rife in story-telling. Their favored class options also include one for antipaladins and again, massive pieces of information for their interaction with other races and clans and we also get a CR 6 sample sorcerer.

Clan Voussoi get +4 Str, -2 Dex and -2 Int, are large, get a base speed of 30 ft and can’t fly, gaining only +4 to fly checks due to their vestigial wings. They do get the option to make AoOs that deal 1d10+1.5 str-mod with their tails at a reach of 5 ft in exchange for Natural Armor and Stony Hide and need to actually eat 1/4 of their massive weight to avoid starvation – brutish and massive, they get favored class options for alchemists, barbarians, fighters, summoners, monks and rangers and also a sample gunslinger character as well as all the information on interactions with other races.

Clan Crenelt is the opposite on the physical scale – they get +4 to Dex and Int, -2 to Str, Con and Wis, are small, have only a base speed of 20 ft and lose their climb speed and, I assume, gliding wings – the pdf mentions wing attacks here, but the gargoyles don’t get one – so yeah. They also get +2 to Craft-checks relating to stone and metal and always consider stealth a class skill and get +2 to stealth. They may also 1/day reroll a ref-save, taking the better result. The clan also features a prankster bard sample NPC. And yes, I’d usually be screaming “OP” by now – but the reduced movement rate and movement options means that when these guys start failing stealth, they’re in deep trouble – which is interesting, even though I’d not a big fan of the double +4 to attributes…

Clan Lesene get +2 Cha and Wis, -2 Str, additionally get the dragon subtype and get to choose from either acid, cold, electricity or fire – and from either a 15 ft. cone or a 20 ft. line. 1/day, they may blast foes with this chosen attack as a breath attack, replacing the prehensile tail and gliding wings. They may also choose one non-damaging, non-attacking spell and choose that as a spell-like ability 1/day, but lose their spell resistance. Which would make them overpowered again, were it not for the fact that they get a vulnerability for +50% damage of the element contrary to their chosen breath weapon. They are also the only class that gets favored class options for clerics, oracles etc. and we get a neat oracle/witch sample character including familiar.

Clan Bêtes (bête meaning btw. not only “Stupid”, but also “Beast” in French) is interesting in name and indeed – these gargoyles are rather animalistic and get +2 to Str, Dex and Con, -2 to Cha, get a base speed of 50 ft. – and are quadruped. No hands. +4 to CMD versus trip and +2 to initiative, get +2 to CMB made to bull rush and overrun, may once per day fly into a frenzy for +2 Str and Con, -2 AC for one minute and gets an additional primary bite attack at its size +1, resulting in e.g. 1d8 damage at their standard medium size. They also get +3 natural armor bonus instead of the standard +2, can’t speak (!!!) and is essentially immortal. Yes. Immortal. Each of these gargoyles is sworn to a rookery and while at least one member is alive, they automatically are raised from the dead after 24 hours. And yes, potential DMs allowing this race should consider VERY well whether they allow it – but on the other hand, it makes for a very interesting option to play AND if you’re uncomfortable with it, just have the rookery be slain before game, making the gargoyle mortal. They also get a sample character (a savage warrior level 7) and favored class options for fighters, barbarians and monks.

All right, the basic clans out of the way, next we get a massive ecology of the gargoyles, including the concept of lifestone (from which they can create new gargoyles) and a sample rookery (i.e. gargoyle-settlement) – and beyond this massive, awesome article, we are also introduced to the Teuteur, Chercheur, Supplice and Furieux are introduced in extensive detail before offering us tribe-specific archetypes. Gargoyles of the Supplice may for example become the deadly bane of divine casters with their faithkiller inquisitor archetype. Teuteurs may become stonehide defenders -gargoyle PALADINS. Yes, and the archetype is actually rather cool. Chercheurs get a bardic archetype, the Tower-Seeker, focused on communication and knowledge and the Fiendish Corrupter Witch of the Furieux that is either sworn to draconic or devilish patronage, may increase their casting, lengthening it and taking con-damage in exchange for more power. They also can contact other planes via their possessed familiars and maintain summoning-enhancing bloodgates.

Next up are 6 new racial feats – none of which are overpowered as well as 13 well-crafted traits. There also are two feats intended mostly for those not too content with the SR-drawback, increasing the chances to suppress your SR when casting divine spells, allowing you to easier cast divine spells. Interesting rules-wise would be the option to decrease your SR for a day to power your channeling, add a metamagic feat that increases the level by +1, get +2 to saves versus effects that penetrate your SR or sacrifice a massive amount of SR to lessen the effects of detrimental spells overcoming your powers

Want to further increase your gargoylish powers? There’s a 5-level racial paragon-class with d10, full BAB-progression, good fort- and ref-saves and 2+Int skills per level. The class essentially boosts attributes, armor and claw damage and while it lacked some information in this pdf’s first iteration, this information has since been updated.

Furthermore, we get 6 new  spells, allowing gliding gargoyles to fly, get razor sharp claws, pronounce slumbering curses, send gargoyles into a petrified sleep or conjure a spectral guardian to watch over your sleep. 4 new magic items are also included, as is an organization obsessed with hunting down gargoyles and unearthing what made them possible, including a fully statted level 11 summoner or a lawful good church that seeks to capture gargoyles and imbue them with celestial energy. Yes, they may lose their personality and memory, becoming obedient soldiers. Yes, the even lose their immortality, starting to age and die – but it’s all for the glory of the heavens! Disturbing, and again with two neat level 13 sample character. Of course, we also get an evil inquisition hell-bent on eradicating gargoyles.

Editing and formatting are improved since the pdf’s first iteration- now I have nothing to complain about – these disciplines can be considered very good now. Layout adheres to a relatively printer-friendly two-column b/w-standard and the pdf comes fully bookmarked for your convenience. The artworks in b/w are nice. It is also extensively bookmarked with hyperlinks to d20pfsrd.com.

I was NOT looking forward to this pdf. After “Dwellers in Dreams” I expected the worst – which would have sucked, since “gargoyles” constitute one of the rare series that defined my childhood. I love them. You may have noticed me using the word “would” – yeah. Everything its direct predecessor botched, this one does right – are the classes more powerful than the core races? Yes, but they pay a massive price for this power, resulting in an overall balanced feeling. Are some of these Clans focused on specific roles? Yes, and slightly more so than I would have liked, but their UNIQUE racial abilities and weaknesses should make the resulting gaming experience FUN and different.

And yes, this shows that even ~20-point builds can come off as something balanced with the core races when handled properly and not bloated with bland skill-bonuses – kudos for TPK Games for getting it right so FAST! This is definitely a supplement to check out, if not a perfect one. Hence my final verdict will clock in at 4.5 stars, rounded up to 5 due to having taken care of all complaints I had ready in my second draft of this review and a heartfelt recommendation for aficionados of gargoyles and both players seeking to play them and DMs wishing to craft a campaign featuring them. Congrats to the author-team Bernie McCormick, Brian Berg and Rick Cox.

You can get these Gargoyles here on OBS and here on d20pfsrd.com’s shop!