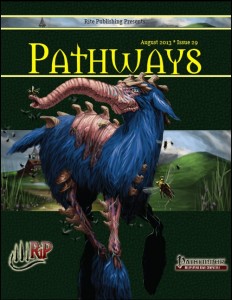 As always, we kick off this issue with David Paul’s editorial, which muses on the nature of rulership this time around, providing some interesting venues to pursue and develop – what separates problematic realms from good ones? All in all, a great call for PCs to get involved, to become politic in the context of a campaign.

This issue’s template from Rite Publishing’s overlord Steven D. Russell would be the CR+2 hiveskin creature, which comes with a sample CR 5 disenchanter (lovingly rendered on the cover by Dennis Darmody) – and yes, these creatures can  share senses with members of their swarm, making for superb spies…

At EL 8, Creighton Broadhurst also has some new fodder for us – an encounetr where ogres try to blackmail the PCs into handing over money or they’ll hang their hostage, one unfortunate warrior. A nice moral dilemma with a lot of rules-oomph added – round by round breakdown of the hanging, holding up the hostage etc. – all’s covered! All in all, an awesome encounter!

Elton Robb also has some uncommon options for you, to be precise, two new races: The Dolphs and the Makos – and if the nomenclature was not hint enough, both are aquatic races: Dolphs get +2 Dex and Int, -2 Wis, can survive for 10 x Con-point minutes out of water and move at a base speed of 30 ft. there, can hold their breath 6x Con-mod rounds, get a swim speed of 30 ft and +4 to diplomacy to gather information and Knowledge (History and Local) become class skills for you. For 1 RP (if you play with them), they can add +10 ft. to swim speed and they can use locate object at will as a psi-like ability – which is a tad bit weird since the default assumption of DSP’s psionics is transparency between spellcasting and psionics. Furthermore, locate object is usually not found among psion/wilder powers. The second new racek, Makos, are hybridized human/mako sharks and get +2 Str and Cha, -2 Con that gain the aquatic subtype and may fly into a +2 Con + Str, -2 AC frenzy when taking damage. Unfortunately, the race fails to specify what kind of action flying into a frenzy is. Also suboptimal: Makos get a swim speed of 10 ft., but also the +10 ft. enhancement to said speed (though this time sans the RP-information-strange…). Worse, I’m not sure whether the 10 ft. enhancement has already been  included in the base swim speed of either race. Mako also get the scent special quality when in water. I like the ideas behind these races, but both fall a bit flat on the rules-wording side. They also represent one major missed chance: With Cerulean Seas by Alluria Publishing being THE superb resource for underwater adventuring, why don’t we get information on depth tolerance, buoyancy etc.? The lack of these pieces of information unfortunately further limits the usability of these new races.

Now next up, we get a sneak peek at Ashford, the plague-ridden village from Raging Swan Press’ Village Backdrop series  -which is btw. an awesome supplement. The rumor-table is a bit small font-wise for my tastes, but at 2 bucks, getting the full pdf should be no problem for anyone.

Steven D. Russell also provides a sneak peek – the second that takes a look at facets from teh upcoming, highly anticipated Questhaven campaign setting, this time spotlighting the Great Church of the Pantheon and the organization “Orphans of the Ecumenical Commandments” – tying in with the editorial, these individuals seek to unify the world not by conquest, but by agreements. Written in lavish in-character prose, this article drips flavor and style and also comes with a healing-focused paladin-archetype that comes with a mercy that allows you to put prisoners into suspended animation and generally, the archetype can be considered a constructive force of the law and integrity. Really neat, also due to a concise code of conduct provided!

We also get 21 questions with Rite Publishing’s Steven D. Russell ina cool interview that covers quite a bit of ground and end this issue with a vast array of reviews of your truly, only featuring the cream of the crop, i.e. reviews of really good products.

Editing and formatting are very good, there are no particularly significant glitches herein. Layout adheres to Rite Publishing’s two-column full color standard and the pdf comes with a gorgeous cover artwork. The pdf also comes fully bookmarked for your convenience and  – it’s FREE!

This installment provides some awesome content and some that is a bit problematic: While I love Creighton Broadhurst’s encounter and the sneak-peek of Questhaven (especially the latter being pure awesomeness), I also feel that the aquatic races are SO close to being sheer awesomeness and yet miss the mark by a margin. Still, this being essentially FREE, I don’t see myself complaining – this is well-worth your space on the HD, clocking in at 4.5 stars, rounded down to 4 for the purpose of this platform.

You can get this FREE e-zine here on OBS and here on d20pfsrd.com’s shop!