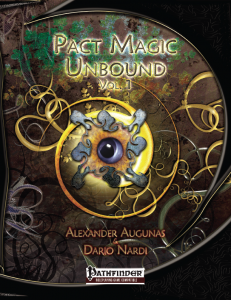 The first book converting pact-magic to PFRPG is 86 pages long, 1 page front cover, 2 pages editorial, 1 page ToC, 1 page SRD, 1 page back cover, leaving us with 81 pages of content, so let’s check this out, but only after a  short glance back:

When I bought the “Tome of Magic” for D&D 3.5, I immediately fell in love with Pact Magic – I loved the concept, the great fluff…but power-wise, it came apart. With the notable exception of some minor supplemental material in certain Dragon-APs by Paizo, I never saw any supplemental  material and if you’re like me and have a LOT of books, that’s a big drawback. And then, when the now deceased Kobold Quarterly magazine featured a pact magic ad, I clicked on it and ordered the books in blind faith. And if there was ONE defining experience that still makes me check out unknown 3pps, it was this one: I got gorgeously-crafted, beautiful hardcover books for a very low price and they’ve seen a lot of use in my subsequent campaigns.

With PFRPG, we now FINALLY get the update of my favorite magic system and it’s more than just a cut-copy-paste-job – in fact, we get a completely new base-class, but for those of you not familiar with the concept, here’s the spin: First, binding a spirit requires drawing a seal on a free 5-foot square – depending on the spirit, you’ll have to draw the seal e.g. in darkness, with blood, etc. After drawing this symbol, you perform a ceremony, which is unique for each spirit and might range from the weird to the creepy. After witnessing the manifestation of the spirit, the binder barters with it: Each spirit comes with a binding DC that is compared to a binder’s binding-check. Said check is d20+ 1/2 binder’s level+cha-mod. You enter a pact with the spirit regardless of whether you succeed the check, but it does have consequences: For 24 hours, the binder shares soul and body with the entity and the check determines the amount of influence the spirit exercises over the binder. Successful checks indicate e.g. that the binder can suppress potentially weird physical signs that accompany entering a pact with a spirit. Also, the spirit’s personality affects your behavior and you may ignore the spirit’s restrictions like “not lying”, gold as a top priority, short tempers etc. Now this system thus does not only provide a magic-system, it also provides a GLORIOUS role-playing catalyst.

That out of the way, Pact Magic, fluff-wise, is also a somewhat scorned upon practice that brings out the fanatics in e.g. some clerics and has always carried the allure of the forbidden – after all, the practitioners channel spirits that are beyond mortality and often, the range of the gods. Thus, rules provided for hiding the physical signs etc. are provided. Since the forbidden aspect is partially based on an availability, other classes can wilder in the territory of Pact Magic – especially interesting for paladins, who can now vow oaths against spirits or become Templars of Spirits, who may smite those bound as well as evil and perform exorcisms. Clerics may become occult priests, take the occult domain and even worship spirits now – though whether sanctioned or as a heresy depends on your world.  Oh, detecting heretics is supplemented by 3 new spells. Pactsworn Pagan-druids modify their shape to be more pleasing to the spirit and pay for their binding with diminished spellcasting, while the monks of the empyrean friar blends martial arts with being possessed by spirits and their supernatural abilities – I had a similar character in one of my campaigns once and it rocked, so cool concept! And yes, even fighter may opt to become so-called warshades and benefit from pact magic.

Rangers get a new archetype to gain some limited pact magic-associated abilities, while rogues may select new talents to hide supernatural aspects, improve capabilities of spirits or play an untouchable, who always gets the short end of the stick, bargain-wise, but apply a skill-bonus to a whole attribute’s array. Sorcerors may chose the Ergon bloodline that has tumor-like, eye-resembling growths spawn on the body and work as eyes as well as the power to devour magic and transcend into a half-construct as per the ARG.  The second bloodline, the ravaged, is closer to a more conventional pact magic/sorceror blending. Wizards may opt to take the new soul weaver archetype, who have their spellcasting prowess diminished and forsake 3 schools, but may in turn fuse pact magic and regular magic by e.g. sacrificing prepared spells into granted abilities for more flexibility. Barbarians may become totemic sages (and also get 2 rage powers) and bards soul muses. Bards also benefit from a new masterpiece to daze foes.

You may have noticed some confusing terms here, so let me elaborate: A spirit’s write-up takes up at least 1 page and not for no reason – each spirit has totems, mementos that remind him/her/it of its former life that grant the binding character a +2 insight bonus on binding checks when present, +4 when all are present – researching these can, again, be a great roleplaying opportunity. The aforementioned ceremonies can be rushed, but that makes the result be more prone to being unfavorable for the binder. Binding spirits has multiple benefits: First of which would be minor benefits – and plural is appropriate indeed – for each spirit has at least a couple of these benefits. They range from permanent boons while being bound to the spirit to abilities that can be used 1/character level to some that have a cool-down of a couple of rounds, but no other restriction. Major abilities are simply the stronger ones granted by the spirit. Beyond these, each spirit has a capstone empowerment, which only becomes available to the binder if he/she succeeds at the binding check by 10 or more, making even low-level spirits bring something new to the table. All spirits also are aligned to one of 13 eldritch constellations and almost all of aforementioned archetypes are limited in their constellation choices. Each spirit has a favored enemy and ally constellation (sometimes multiple) that can be further enhanced by feats and makes binding spirits to allied races easier/harder, respectively. Furthermore, each constellation has 4 different potential constellation benefits.  Now, the binders may also opt to forego a minor ability to instead gain the service of a so-called vestigial companion (after vestiges, the name originally applied to the spirits). The spirits also are grouped by levels from 1st to 9th, following in that regard the traditional presentation.

Now, it should come as no surprise that we also get a full binding class, the Occultist, who gets 3/4 BAB-progression, d8, 4+Int skills per level, and bind multiple aspects and squeeze augmentation bonuses out of their spirits.

But what are these spirits? Well, for example, you could bind Cave Mother, she who discovered fire, General Hessant, the Patron of Lost Soldiers, a tall story come to life by enough people believing in it, N’alyia, the First Vampire, the first of the otyughs, a living curse, Loh’Moi the geometer that sought to think 4-dimensional by teleporting into his brain, ultimately to turn back time, famed Dagon (Yes, mythos-aficionados – one constellation is called Dark beyond…), a psychotic elven princess turned black unicorn, a king betrayed by any and all as well as the sworn enemy of time. And no, that were not all contained herein and no, I’m not going to spoil them all.

A total of 20 feats are also part of the deal to expand the options of your pact magic-casters. Interesting is also that multiple models of spirits-known are presented for the DM, putting control essentially in your hands while featuring guidelines that help maintaining balance easy.

Editing and formatting are very good, though I noticed some minor typo-style glitches, I encountered very few and far-between, so nothing to truly complain about here. Layout adheres to a  b/w-2-column standard with many of the artworks of the 3.5-version and one artwork for each seal. The pdf comes fully bookmarked, but sans nested bookmarks.

Pact Magic Unbound Vol.1 is a great streamlined version of the Pact Magic-rules I’ve come to love and enjoy in my home-games. The thing is… I have both 3.5 hardcovers, which are now out of stock everywhere I look. And I realize these two probably have been produced at a loss – at least that would explain the stitch-binding and top-quality paper. In direct comparison, this one still just feels so…incomplete to me. While there are quite a bunch of cool spirits in here, there’s a factor that made me LOVE, ADORE the original book, which is only partially present herein:

In the original, EVERY spirit had a legend, an expertly-written, sometimes, creepy, sometimes tragic, sometimes philosophic, but never boring history spanning a whole page as well as a cliff-notes version for the DM. While multiple of the spirits have retained their legends in this book, there also are several that have been omitted – for example the disturbing legend of evening star. The PFRPG-mechanics are awesome (and I hope, we’ll get APG, UM and UC-support in Vol. II), the omission of the legends/cutting them down to mere paragraphs may conserve page-count, but it also detracts from what made pact magic stand out in my mind – not necessarily the mechanics, but the storytelling. The AWESOME flavor that made Pact Magic feel much more magical than regular magic.

Don’t get me wrong – this is still a great offering. Its crunch is actually better, getting rid of alignment-changes etc. On the fluff-side, though, it just isn’t as brilliant, as mind-boggling in its fluff as its previous incarnation and I really hope Vol. II will come with ALL legends – for more than anything else, more than the solid mechanics, it’s always been the stories that, for me, defined Pact Magic.

Due to this factor, I will settle for a final verdict of 4 stars + seal of approval, for the rules are awesome – but the cut legends and the useful cliff-notes make this pdf suffer a bit. If you can, somehow hunt down the 3.5-books (Core and Villains) as well – they are worth every cent and having legends for ALL spirits makes them so much cooler.

Finally want your magic to feel like magic? Get this update of the Pact Magic-rules either on d20pfsrd.com’s shop here or on DTRPG/RPGNow here!