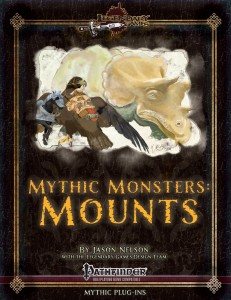 This installment of Legendary Games’ Mythic Monsters-series is 32 pages long, 1 page front cover, 2 pages editorial, 1 page ToC, 1 page SRD, 2 pages of introduction, 2 pages of advertisement and 1 page inside back cover, 1 page back cover, leaving us with 20 pages of raw content, so what do we exactly get here?

Since mounts aren’t just monsters, we kick off the pdf with some general pieces of information regarding mythic mounts (and animal companions), noting that some of the mounts herein come with integrated advanced creature templates as alternatives to provide sturdier options. Cool! Advice on further advancing mounts via templates, training them and 2 new mythic feats help here as well – one upgrading a companion’s ability to its mythic equivalent, one making the training of mythic creatures easier. The Trick Rider and Mythic Rider champion/guardian path abilities are also included, as is the companion mythic ability for the 6th tier guardian. Whereas the former you’ll know from the respective mythic minis, the latter makes a companion mythic/adds a mythic ability. This bonus content is okay, but a) not the focus of this pdf and b) not yet something that got me excited. Solid in craftsmanship, yes, but not yet legendary.

Let’s start, shall we? First would be the CR 5/MR 2 Mythic Bison, which can generate spirit bison phantoms to improve its trample. Sweet! CR 2/MR 1 mythic camels are next to unkillable due to starvation/thirst thanks to counting as if under the effects of a ring of sustenance. better yet, via mythic power, said camel can share its powers with the rider and even negate the fatigue condition or mitigate exhausted down to fatigued. Again, very cool. Mythic Riding Dogs (CR 1/MR 1) can emit pity-inducing whimpers and follow trips immediately with drag-maneuvers. This one also comes with an advanced version at CR 5/MR 2 that also gets the ability to stabilize the dying and duplicate some healing/soothing-themed SLs via licking the targets. Super-Lassie ftw.! ^^

Mythic Dragon Horses (CR 11/MR 4) can ride the lightning and generally makes for a truly fearsome flying beast to carry the most powerful of heroes into battle. The Mythic Giant Eagle at CR 4/MR1 gets an ability that more creatures should have – when hitting with both claws, they may drag opponents along: Either offensively or defensively. Nice swooping action! The CR 8/MR 3 version is an even better aerial interceptor that gets bonuses when readying against adversaries.

Mythic elephants clock in at CR 9/MR 3 and may pass through natural undergrowth, throw adversaries with the trunk and even toss adversaries with their charges – once again, this is one of the beasts that is closer to what the base creature ought to be able to do – the trunk and charge-tossing will be added asap to all non-mythic elephants in my campaign. Mythic hippocampi clock in at CR 3/MR 1 and allow the riders to breathe water or even act as if under freedom of movement while underwater. They may also create waves to topple/bull rush foes. Neat! The Mythic Hippogriff comes sans a non-advanced version and may emit a stunning shriek and catch falling allies mid-air via mythic power as immediate actions.

The CR 2/MR 1 Mythic light horse has superb speed and when running, benefits from an array of cool defensive abilities. Again, a set of abilities I will apply to some (though not all) supernatural/legendary horses. The Cr 6/MR 2 mythic advanced heavy warhorse is more geared towards combat and not only is not particularly impeded by armor, it also gets essentially a counter-flanking kick and diehard/mythic power fast healing when knocked below 0 hp.

The CR 6/MR 2 Mythic Nightmare can exhale soporific smoke and entice innocents towards an enchanting ride…that fascinates and kills them. NASTY! The CR 14/MR 5 Mythic Nightmare Cauchemar is this beast’s big bad brother – flaming hooves, hellfire, powerful trample – a steed worthy of the champions of darkness. Perhaps it’s my Warhammer background, but I was constantly thinking “This could be Archaon’s steed” while reading this one.

We also get two pegasi, one at CR 4/MR 1 and one at CR 9/MR 3. These flying steeds are particularly adept at avoiding titanic adversaries and they also can emit a reflexive whinny after succeeding a save versus freedom-restricting effects. The advanced version also gains wing buffet attacks and the option to use mythic power to smite foes larger than the steed. Cool.

At CR2/MR 1 the mythic advanced pony has one of the coolest abilities in this book -inexplicable survival. For one mythic power, these trusty mounts can survive EVERYTHING. Yes, even rocks fall, all die. And no, abusing this ability will not end well for the rider… At CR 15/MR 5, the mythic advanced roc makes for a truly majestic beast -with fortification, the option to drop huge things on foes, the option to create superbly strong winds, these titanic birds will make for a superb entrance.

At Cr 13/MR 5, I was exceedingly looking forward to the Mythic Sleipnir – and boy, does it not disappoint -summoning valkyries as the choosers of the fallen, and creating giant-damaging rainbow-bridges breathe the spirit of myths. Glorious and so much closer to the myths than the rather disappointing non-mythic standard sleipnir!

What can step up to this awesomeness? What about riding a CR 10/MR 4 Mythic Triceratops that is a true juggernaut of charging destruction? The pdf also includes a list of the mounts by CR.

Conclusion:
Editing and formatting are top-notch, I didn’t notice any significant glitches. Layout adheres to a 2.column full-color standard and the pdf comes with several nice artworks. The pdf comes without bookmarks, which is somewhat of a comfort detriment, but it is hyperlinked with unobtrusive hyperlinks -the good kind, that only is applied where it makes sense.

Jason Nelson delivers a glorious array of mythic mounts, worthy, one and all, to carry the best of heroes and worst of villains into battle, adding arrays upon arrays of superb signature abilities to the base-creatures, several of them actually fixing the base creatures not being too closely in line with what the creature ought to be able to do. Usually, I’d consider depriving this pdf of my seal of approval for the bookmark lack, but the pdf is simply too good – the mounts are universally awesome and not one felt lackluster or boring – final rating: 5 stars + seal of approval.

You can get these mounts fit for legendary heroes (and villains!) here on OBS and here on d20pfsrd.com’s shop!

Oh, and if you’ve somehow, anyhow, missed it – Legendary Games is currently running a kickstarter for exquisite, massive Mythic-books – and you can vote on which creatures from this series make their into the epic hardcover! If you’re interested in Mythic Adventures, here’s their kickstarter-page!