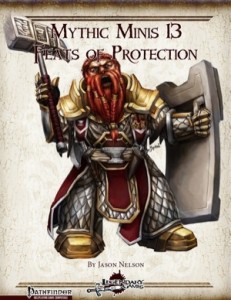 This time, we’re all about feats of protection, so let’s check this out!

Okay, unsurprisingly, this pdf offers mythic versions of the “bodyguard” and “In Harm’s Way”-feats, with the former not requiring you to threaten foes to help your allies and even use mythic power to reach them, whereas “In Harm’s Way”‘s mythic version allows you to use AoOs to intercept attacks, taking the effects upon yourself – this means no AC-tanking per my reading, though the feat could use some tighter wording as to whether the intercepted attack has to hit your AC as opposed to the one of your ally. While this remains a slight blemish, I did enjoy what these two feats do – i.e. offer a mythic version of the base feats that indeed feel distinct in what they do, not just like some generic mythified feat.

The further increased AoE of “combat patrol” doesn’t look like that much on paper, but in-game is rather significant – especially the further reach-increases with higher tiers. Personally, I’m not too big a fan of the first increase by +5 feet at 5th tier, but that may stem from being very conservative with reach and the like – too many deadly builds possible that way. “Coordinated” and “covering defense”‘s mythic versions as feats make for great defensive feats, with the former especially breathing the spirit of military units and scenes like the rain of arrows in 300, so yeah, neat.

“Defensive Weapon Training’s” mythic version allows you to further increase your prowess versus the respective weapon group ad maneuvers initiated against you with it, even allowing you to share half the bonus granted by the feat with allies. Favored Defense on the other hand allows you to extend the bonus granted to adjacent allies – there’s an insane component here, though. The bonus granted by favored defense is a dodge bonus and the ability to, upon taking the feat twice, extend the bonus over a significant range would allow a unit of rangers to stack it through the roof. Not something that happens too often, admittedly, but still – could have been slightly more elegant here.

Jason Nelson has taken a difficult topic with defensive feats, mainly because the game per se isn’t that great in this regard. That being said, the mythic versions of these feats make sense, often vastly surpassing their base feats in tactical capabilities. While generally, teh feats are vastly superior to the base ones, they do stumble here and there slightly, even when taking the increased power-potential of mythic gameplay into account. Still, a nice, fun array of feats for a low price and hence well worth 4 stars.