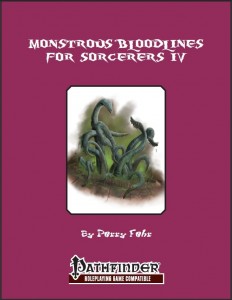 This supplement is 9 pages long, 1 page front cover, 1 page editorial/ToC, 2 pages of SRD, leaving us with 5 pages of content, so let’s take a look, shall we?

Perry Fehr’s series goes into the fourth installment now and kicks off with the Elohim bloodline, obsessed with creation: The bloodline allows sorcerors to create creatures with a CR of less than 1 ex nihilo cha-mod times per day by incurring 1 point cha-damage per CR of the creature – why per CR? Because later, apart from defensive abilities, they also learn to create slightly more powerful creatures.  Per se an imaginative, nice bloodline for tinkers who want the right creatures for the right task – especially since they don’t have control over their creations. Nice one!

The second bloodline would be the Fungal bloodline. This bloodline nets you DR/slashing equal to the spell-level you cast for one round and can expel clouds that fatigue targets and deal minor con damage. I assume the cloud immediately disperses, but no information on whether that’s true is given here, so clarification would be nice. Faster healing is also nice, but at least for me, gaining all plant-traits as soon as 9th level is a bit on the strong side, whereas the poisonous blood at 15th level and the apotheosis capstone feel a bit weak in direct comparison.

The Kyton-bloodline gets the ability to manifest blood-glazed chains cha-mod times per day at a range of 30 feet that deal minor damage plus a bit of wis-damage on a failed save. They also get an unnerving gaze, which may make targets shaken for 1/2 your character level rounds – which is fine per se, though a range would have been nice – I assume it follows the default of gaze attacks, but I’m not sure. Useable 3+ cha-mod times per day, this is also rather strong at 3rd level.

The descendants of the Mythic bloodline hail from the seed of heroes of legend, and as such, they essentially may enact what could be called the little siblings of mythic abilities, namely, the mythic surge: Adding 1d4 to any d20-roll cha-mod times per day before the roll is made and later upgrading dice-sizes to up to 1d12. Solid.

The Nosferatu bloodline can grow claw attacks and emulate a combination of verminous and vampiric abilities that includes transforming your arm into a blast of nauseating vermin that damage a foe. Overall, once again, a solid bloodline. The penultimate one would be for those that carry the blood of Psychopomps in their veins and these beings may add ghost touch to their attacks or show targets glimpses of the afterlife as well as gaining some immunities à la death effects, poison and disease – once again a bit soon at 9th level, at least for my tastes, but not per se broken.

The final bloodline herein would be the Starspawn bloodline, which allows you to enter telepathy with willing targets or deal wis-damage to foes as well as bonuses to skill-checks based on mental attributes. At higher levels, you gain the no breath-quality and immunity to cold (again, a tad bit soon) and also leadership at double followers or two metamagic feats at 15th level. I’d be interested how this interacts with sorcerors that already have the leadership feat, an answer the pdf unfortunately does not provide.

Editing and formatting are very good, I didn’t notice any glaring glitches that would impede the quality. Layout adheres to PDG’s 2-column no-frills standard and the pdf comes fully bookmarked in spite of its brevity- nice!

The fourth installment of monstrous bloodlines offers us some rather unique takes and ability arrays, with overall solid bonus-spells selections and varied options that should make creating more diverse sorcerors a fun task. That being said, personally, I’m not too big a fan of the level 9-immunitites (and I know: there are precedents…) many of these have. That’s a matter of taste, though, and will not feature in my final verdict. What will feature here instead is the fact that the high-level abilities at level 15 and 20 often are not that impressive. +4 Str and Con, -2 Dex + no more eating? Not particularly impressive and unfortunately, the same hold true for a couple of the capstones herein. That being said, there is gold here – the rather experimental Elohim bloodline, which in the hands of the right player, can be rather powerful, for example or the “little sibling” of Mythic Surges make for cool cutting edge ideas – and offset the at times slightly (though much less than in no. 3) imprecise wording slip-ups and none-too impressive capstones some of these have. Taking the very low, fair price into account, I will settle for a final verdict of 3.5 stars, rounded up to 4 for the purpose of this platform.

You can get these interesting bloodlines here on OBS and here on d20pfsrd.com’s shop!