This compilation actually consists of two different files, for the first time collected in one book: 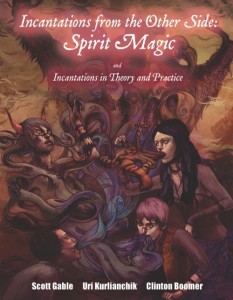 Incantations From the Other Side

Incantations kicks off with an introduction to the spirit world, explaining how spirit magic and incantations are neither truly divine nor arcane, how they represent a primal power that can be tapped via rituals by anyone who knows how to do so, but may exact a price. (2 pages)

The first chapter describes Incantations from the general area of Vodou. It introduces the concepts of rado, petro and guede Loa which are not bluntly described as the traditional alignments but rather differences in the temperament of the more or less amoral Loa. We get 7 Rada Loa,  5 Petro Loa and 8 Guede Loa in this chapter. Apart from several nice incantations we also get a new disease in this chapter. My favorite incantation makes it possible to literally shed ones skin and temporarily become a incorporeal form, including attacks etc. (12 pages)

The second chapter details the so-called Middle World, inspired by Slavic mythology. We get 6 spirits and a sidebox with two great ideas spawned from mythology about spirits and 8 incantations. They have a completely different feeling from the first chapter and make EXCELLENT additions to e.g. a “Tales of the Old Margreve”  or otherwise Slavic-inspired setting.(12 pages)

The final chapter details the Arcanum and its utterly alien, slightly Lovecraftian patrons from beyond the stars and contains 4 quite complex incantations as well as a sample lodge and 5 sample patrons.(9 pages)

Editing and formatting are top-notch, the pdf comes in full color and is a beauty to behold, complete with nice artwork and its own distinct style. However, it will test the mettle of your printer and a printer-friendly version would have been very much appreciated. With regards to the content, I can only say: WOW. I’ve always somehow disliked the fact that magic has become a more or less predictable commodity in RPGs and, while I always understood the necessity of predictable systems, this little file adds one stable of fantasy literature and mythology I always missed: The powerful, cool rituals and negotiations with other entities, the underdog non-caster somehow cursing his opponent. The wise woman beseeching the spirits of nature etc. – without being druids, mages etc., has too long been absent from our favorite systems and these incantations are not only expertly written, make great hooks for adventures and put the awe and unpredictability back into magic, they are also plain fun, creepy and/or cool to read. If this pdf does not inspire you to write an adventure, I don’t know what will. The system is elegant, concise and should be included in the standard PFRPG-canon. My only two gripes are: I want a sequel, a whole book of incantations and I want a printer-friendly version. Content-wise, this is a straight 5-star-file, but be aware of the lack of a printer-friendly version. If that’s a problem for you, subtract a star. My final verdict will be 4.5 stars, rounded up to 5.

The second part is based on this:

This pdf is 9 pages, 1 page front cover /including a piece of b/w artwork and text, 1/3 page SRD and 1/3 page editorial, leaving approximately 7 and 1/3 pages of content.

Everybody who knows me from the boards I attend and the posts that I post, knows one thing: While I love the modularity of D&D’s 3rd edition and its children like Pathfinder, I hate the way they usually treat magic items and I’m somewhat baffled by all the rules-crunching people do to build killer spell-casters. While I don’t judge any of you, I was always wondering: Where is the MAGIC, where has the wonder of magic abilities and with it, the  reason for the in-game perceived arrogance of the mighty wizards gone? Has magic, one of the most significant, defining factors of any given campaign, deteriorated into a predictable, boring force that just makes it easier for casters to dominate non-casters at higher levels?

Nope. This is where this pdf comes in. Ever wondered how non-castes use those nifty little curses, rituals  and other tools to utterly screw the lives of other people? How and why their rituals entail a sacrifice they are loathe to pay and try to avoid? What the potential consequences of their failure might be?

For an almost ridiculously low price, you can have all these questions answered, at least crunch-wise, for you campaign. I’m not kidding. If you, as a D_M, EVER wanted to bring the sheer aspect of wonder of magic back to your campaign this is the way to do it.

On a crunch note: What are Incantations? They are essentially skill-based, potentially co-operate rituals, complete with backlash, guidelines to use minor rituals and duplicate major magical effects. They ROCK! Your expert-mayor wants to curse the lvl 14 Wizard? There you go!

You’ll get all the DCs, modifier and the rest to make your own incantations. You even get 3 samples, previously unreleased incantations to both be examples of what could be done with the mechanics and help you design more.

I love the concept. I love the execution. I love the price. Zombie Sky Press has done it. This file has the potential to change your approach to PFRPG, hell it has the potential to change your approach to roleplaying and the aspect of magic in d20-based systems. Editing and formatting are top-notch, I didn’t notice any mistakes. The one piece of b/w-artwork is kind of cool. How do you rate a file that brought ritualistic magic, complex curses and all-out-non-spell-casting-class adventure seeds as well as an as of yet unperceived variety of hooks to your campaign?

Simple: With the best possible score: 5 out of 5 and the Endzeitgeist-seal of approval. These mechanics should be standard rules, are made of (*internet slang*) awesome and win (/*internet slang*) and quite frankly should be part of just about any DM’s campaign if (s)he wishes to give either his/her players an extra edge or the possibility to marvel at the potential usages of magic.

Check out the compiled book, also available in b/w and full color, here!