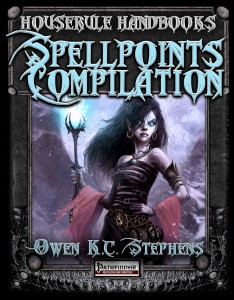 This compilation of SGG’s spellpoints-pdfs is 39 pages long, 1 page front cover, 1 page editorial/SRD, leaving us with 37 pages of content, so let’s take a look!

The spellpoint system essentially boils down to this:

The first 50% of a pool are a caster’s are an open pool, the second half make up his reserve pool. Casting from the reserve pool entails first fatigue, then exhaustion and even unconsciousness when failing a will save of 10+spell points used in the casting. Divine spellcasters have to attune themselves to spells when praying and can attune themselves to a number of spells equal to their wisdom score (not the modifier) per spell level. And then there’s eldritch dissonance, which is a great balancing factor: Preparation spellcasters add the spell’s level to the spell point cost after having cast it once, thus preventing them from spamming a certain spell. Spontaneous spellcasters only add +1 to the spell point cost. Metamagic increases the casting time  of spells enhanced by it and also the spell point cost – with quicken spell being the exception to the first clause.

The respective classes come with suggestions for renaming the spell-point variants when compared to the non-spell-point-using ones. The cleric’s imbue with spell-like ability spell as well as the arcane mnemonic enhancer also gets a revision. Diminished spellcasting archetypes and PRCs are part of the deal as well, providing some guidelines for DMs to modify the respective classes. The book also provides favored class options  for the classes.

A total of 26 feats are part of the deal as well – from aspects to arcana, judgment etc., there are feats to use spellpoints to enhance anything from judgments to wild shapes, master the modified metamagic, regain spellpoints via superb counterspells and regain spell points via sex – a rather cool idea!

The pearls of powers and rings of wizardry are modified by the system as well and the pdf closes with the optional, iconic rules of overcasting and conserving power via reducing casting levels.

Editing and formatting are top-notch; I didn’t notice any glitches. Layout adheres to SGG’s 2-column b/w-standard with solid b/w-artworks. The pdf comes fully bookmarked for your convenience.

The original pdf  was a great innovation that had its minor issues eliminated via its expansion – and now we have all the different pdf collected in one easy-to-use, more polished final offering that greatly enhances the usefulness of the whole system. As a neat little supplement, this pdf provides us with an exciting, interesting alternative to the basic vancian casting system. All in all, a superbly useful version of the cool alternate system and definitely worth a look – if you don’t have the original pdfs, that is. This is a compilation and as such it imho well replaces its component predecessor pdfs, but also doesn’t feature that much incentive to get beyond added comfort should you already have these. My final verdict will be 5 stars with the caveat that this might not be for those who already have the component pdfs.

Want to change up your magic system? Here you can on OBS and here on d20pfsrd.com!