Book of Magic: Insurgency of Summer 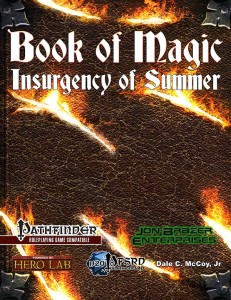 This pdf is 10 pages long, 1 page front cover, 1 page editorial, 1 page ToC/introduction, 1 page SRD and 1 page back cover, leaving us with 5 pages of content, so let’s check it out!

This pdf, like many a magic-book, kicks off with spellcaster lists of the new spells, covering all Paizo-base-classes (including the magus, but not e.g. the antipaladin) and introduces us to 10 new spells. And the first spell is already uncommon to say the least: As part of the spell’s casting, the caster needs to stab him/herself with a +1 flaming dagger. This additional con-damage may not be mitigated and deals an additional point of constitution damage to the caster, but as a result, a deadly cone of searing blood (1d8 per caster level, up to 15d8) sprays forth, sealing not only its regular damage, but also con-damage to cold creatures hit – con damage they can’t negate. A VERY interesting spell with an extremely iconic casting and honestly, I wished that more spells would do such things with their casting components. Campfire Forge is also interesting: It allows you to place weapons in your camp fire and when you draw them forth, they temporarily gain the flaming quality or if they already have that, the flaming burst quality. Interesting spell-mechanics indeed. When compared to these two, the conical fiery blast-spell feels very lame, as does the spell to summon a flight of giant eagles. Fire Mark and Fire Brand allow you to brand creatures, granting the branded +2 to Dex while the spell is in effect and the brand also provides resistance 20 to fire. Beyond that, these two spells can be discharged at any time for a fiery ray touch attack or a 6d6 fireball.

Incinerate Creature deals damage over consecutive rounds and has the potential to panic the incinerated being, while magma wave deals massive damage and can topple those hit by it. Finally, rain of fire may incinerate areas and fill the area of effect with fiery embers and smoke, while repeating fireball is just that – a  spell that allows you to throw multiple fireballs on subsequent rounds, directing the follow-up spheres as a move action.

Beyond spells, we also get stats for two new animal companions, the fire ant and the poisonous giant bee (why no bumblebee as well?). Bards may now profit from the new “Melt the Heart with Love” bardic masterpiece, which makes enemies susceptible to emotion and fire-spells as well as making all weapons count as fire for purpose of ending regeneration. Adherents of the divine may now chose from 3 subdomains, the beltane domain (with a great defensive dance), the rainbow-subdomain (including dazzling rainbow light) and the summer subdomain (which grants resistance and later, immunity to cold). Witches may now choose the blood and summer patrons and any class capable of having improved familiars may opt to choose a mechanical owl (including information to build them as constructs) or young phoenixes (not yet able to rejuvenate).

The final new piece of content herein is the Holocaust cloak allows the wearer to sheathe him/herself in flames, getting either fire or cold resistance 10 and dealing 1d6+7 points of fire damage to the assailants if the wearer is hit with natural attacks/unarmed damage. Furthermore, the wearer may use 2 rounds of the daily allotment of activated rounds to emit a 7d6 nova.

Editing and formatting are excellent, I didn’t notice any glitches. Layout adheres to a printer-friendly 2-column no-frills standard and the 4 small pieces of b/w-artwork are nice. The pdfs come with extensive, nested bookmarks. Pdfs? Yeah, for Jon Brazer Enterprises has included an EXTREMELY tablet-friendly version optimized for 10-inch-tablets in the deal, the second pdf clocking in at 15 pages, with as many non-content-pages as the regular pdf. Still, especially for tablet/laptop-users, this is a new level of service and awesomeness and is a definite plus, as are the provided herolab-files and the copious hyperlinks to d20pfsrd.

The content in this pdf is well-balanced indeed, with two spells in particular being brave and rather innovative in what they do, with the rest of the new content seamlessly fitting in the fire-theme. Fire-theme? Yeah. While I get the summer/agility/fire vs. winter/static/cold dichotomy and while some of the spells actually make this connections, not all of them do and a slightly tighter focus on this new style would have made this pdf imho feel more distinct. Also, the creepy aspects of summer (sweltering heat, insect-plagues, virulent growth) have been mostly ignored, which is a loss to the theme – think about the Dresden Files: Summer can be scary. Taking e.g. the eagle-spell out (Yeah, I get the Hobbit nod – I just don’t think it fits thematically) would have made room for that. Also, the mechanical owl feels a bit like an odd duck, but that may be me.

More pressing is another thing I feel the need to mention: While the content in this book is great and I don’t consider any component to be unbalanced, it is also rather short. As a reviewer, I have to take the superb user-friendliness regarding tablets, hyperlinks, herolab into account as a positive aspect that will offset this relative brevity, but privately, I don’t benefit from any of them. Since I figure that more people will belong to both sides, I’ll settle for two verdicts: If you want to use these features, then this is a 4-star-pdf for you. If you are in for the content only, then due to the brevity, I’d rate this down to 3.5 stars, rounded down to 3. Since the average of both verdicts is 3.75, I’ll settle for an overall rating of 4 stars in the end.

Take a look at this neat summery supplement here!