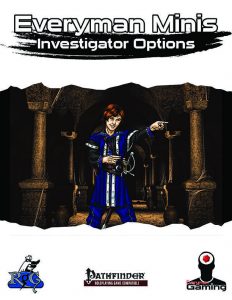 On the introductory page, we get the Inspired Objection feat: Whenever an opponent you can see attempts an opposed skill check that opposes your own skill checks, CMD or HD, you may spend an inspiration use to roll the inspiration die as a free action, even if it’s not your turn. The opponent takes the rolled result as a penalty to the check in question. You can’t spend inspiration this way if you already boosted your skill check or otherwise a check to oppose the roll. If you have combat inspiration, you may use the feat to penalize one atk roll as an immediate action. Ace attorney, anyone? Amazing! “OBJECTION!”

The pdf contains two different archetypes, the first of which would be the far-shot sleuth. Instead of poison lore and poison resistance +2, the archetype gains Precise Shot and is treated as having Point-Blank Shot for the purpose of feat prerequisites, but not e.g. PrC prerequisites. The archetype gets two exclusive talents: Inspired deflection lets the character, 1/round expend a use of inspiration as an immediate action to deflect a projectile ranged weapon as per Deflect Arrows. If the character also has Deflect Arrows, uses stack – both may be used in a single round. Enhanced deflection builds on inspired deflection and lets you deflect a ranged attack targeting any creature within 30 ft. of you, but at the cost of 2 inspiration uses. Minimum level 7th. Nice. 5th level replaces poison immunity and all latter instances of poison resistance with ranged study: He gains Ranged Study for use with one ranged weapon he is proficient with, ignoring prerequisites, in particular Weapon Focus. He may take the feat multiple times, each time applying benefits to a different weapon.

The second archetype would be the freelance agent, who may spend inspiration to modify Bluff, Disable Device, Disguise, Intimidate and Sleight of Hand sans expending inspiration, provided he’s trained in the skill. Underworld inspiration allows the archetype to use this, even if not trained in the skills; however, sans inspired intelligence, this prevents the non-trained inspiration use on Knowledge, Linguistics or Spellcraft – think of the fellow more like a hard-boiled detective than a mystic scholar. Studied strike is replaces at 4th level with sneak attack progression to a maximum of +5d6 at 20th level. Instead of 6th level’s studied strike upgrade, we get early access to the unwitting ally advanced rogue talent, but a target may only be affected once in 24 hours, unless subsequent attempts also include inspiration expenditure. Instead of 10th level’s studied strike upgrade, we get immunity to being flanked or caught flat-footed by targets of studied combat and such studied targets don’t count for the purpose of determining whether the investigator is being flanked. 14th level even lets the character treat such studied foes as allies for the purpose of flanking and 18th level nets the option to expend an inspiration use as part of sneak attacking an enemy. If the investigator does this, he may roll damage twice, taking the better result. These btw. replace the remainder of the studied strike progressions. Cool archetype!

The second part of the pdf contains 5 new investigator talents: Debilitating injury nets the unchained rogue’s class feature of the same name, using studied strike instead of sneak attack, but does not gain an effective rogue level to determine the benefits of certain injuries as a balancing component, though investigator levels do stack with rogue levels, if any. This one is locked behind 7th level. Deduction works like augury, but requires that the character formulate a hypothesis, instead gaining “likely,” “unsure” or “unlikely” as answers, using class level as CL and failure yields “unsure”; use requires inspiration. Really cool – love it and would take it in a heartbeat, if only to do the Sherlock at the table! Investigation magic nets the ability to cast 1/day blood biography, residual tracking, speak with dead, speak with haunt as an SP. An investigator may use this SP 1/day for every 2 investigator levels and may spend 2 inspiration uses to cast another one of them, though at the cost of daily uses as well. Requires minor magic.

Editing and formatting are very good, I noticed no serious hiccups. Layout adheres to Everyman Gaming’s two-column b/w-standard and the full-color artwork is nice. The pdf has no bookmarks, but needs none at this length.

Alexander Augunas shows us once more how you can cram a ton of awesome into very few words. The archetypes are meaningful and interesting; the new feat is amazing. But the highlights are the new talents: Full-blown amazing, they allow the GM to weave even cooler, tougher mysteries – and what player could resist the amazing chance to expound upon theories by presenting a hypothesis at the table? Seriously, I’d so take that one in a heartbeat! While I think that occultic trail may need to be a tad bit more precise, it is quite possible that it is deliberately kept somewhat loose in its definitions to allow for individual GM-interpretations. Considering the tightness of the rules otherwise and the experience of the designer, I am willing to give this thus the benefit of the doubt; it’s functional.

In short: If you like investigators and ever wanted to yell “Objection!” at an enemy, then get this asap. This is a great little expansion, well worth 5 stars + seal of approval.

You can get these damn cool investigator tricks here on OBS!