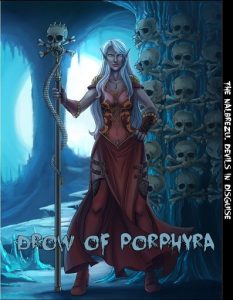 The second installment of books detailing the subtypes of drow that exist on the patch-work planet of Porphyra clocks in at 24 pages, 1 page front cover, 1 page editorial, 2/3 pages of SRD, leaving us with 21 1/3 pages of content, so let’s take a look!

Unlike other planets, Porphyra, defined by the NewGod War and the Calling, is a unique place regarding the drow – taking vastly diverging drow from various worlds, they are NOT all the same. The Nalbrezu, in particular, are a radically different take on the drow: On their home world, the ran perhaps one of the greatest cons of all time, self-styling themselves as a race of immortal rulers…and then, a meteor hit. Drow died. The gig was up, as the in-character prose tells us. The uprising against the decadent drow-rulers was bloody and swift and demonic enslavement in the Abyss wasn’t nice either…but the Nalbrezu got out, courtesy of the forces of hell.

Now, they run the empire of whispers – basically, consider that an ultra-lawful race-wide spanning guild. Think of them as a whole race of conspiracy, undermining other drow and races, guided by the code of the Nalbrezu – which is completely depicted with sanctions and decrees codified in 3 tiers. Oh, and guess what? There is actually power in upholding the respective laws, via incentives, providing a crunch-based rationale for the upholding of the detailed code of these drow. Similarly, they do not have slaves – they have indentured servants and paying one’s dues is crucial to the way in which their unique society is structured. And yes, this installment also provides information on greater and lesser noble houses of the Nalbrezu and their society, surprisingly, is rather egalitarian, but determined by meritocratic ideologies. Also, marriage and divorce is handled in a rather nonchalant manner – basically, these guys feel like an intriguing mix between the tropes one would associate with old school Cosa Nostra and drow, with a surprisingly inclusive bent. Nalbrezu do not penalize necessarily the negative impulses – the courts of corruption, each of which has a specialty, ranging from gambling to assassination.

A society with such a structure obviously also features unique symbols, some of which are represented in a nice piece of artwork. And yes, the generally surprising level of tolerance extends to the religions. Racial stat-wise, they are akin to normal drow, but gain +1 to Bluff and Diplomacy and +1 language per point in Linguistics, message, vanish and detect thoughts as SPs and two energy resistances 5 of two of the following: cold, electricity or fire. The nalbrezu also have a racial geas – once per level, they need to help someone fulfill vengeance… The race is pretty modular regarding alternate racial traits, with alternate SPs, quick Stealth, luck or fiendish resistance. These are well-crafted and generally balanced.

The pdf also sports favored class options for alchemists, bards, clerics, fighters, monks, rangers, rogues and sorcerors – all are nice and focus on the themes of the Nalbrezu.

Like the previous installment, we do get an array of interesting faction traits for houses or courts – though, unlike the last book in the series, the bonus types here have not been properly codified as trait bonuses. Oh well, they are still interesting, gaining e.g. one use of the Div bloodline’s spoiling touch ability. Granted, they are not always perfectly worded, but generally, they are well-phrased enough to work sans problems.

The pdf also provides rules for Sleight of Hand-ing objects and people and points towards 4WFG’s classic Inkantation-tattoo-rules, while also sporting…*drumroll* Torture-rules! The higher your Intimidation ranks, the more degradation techniques and reinforcement techniques you can get to adjust attitudes, implant suggestions in targets and break their will…potentially even shift the alignments of the poor saps subject to the Nalbrezu’s ministrations. These rules are unique, concise and will get some use at my table!

The pdf also sports feats, which include means for Nalbrezu to increase their energy resistances, switch SPs or base Intimidation on Strength or Intelligence. As masters of infiltration, eye color dye, hidden compartments and secret pockets provide cool items.

More than that, GMs looking for more inspiration can find it herein in the guise of several sample nalbrezu nooks and intrigues that provide suitably cool hooks for these drow.

Editing and formatting are very good on a formal level, good on a rules-level – while none of the deviations from standard rules-language are truly problematic, they are here. The pdf’s layout adheres to a two-column full-color standard and the pdf comes fully bookmarked for your convenience. The artworks herein are original, full-color and gorgeous – kudos!

Patricia Willenborg’s second book of Porphyra’s drow…is AWESOME. Seriously, at a point where I was certainly bored by most depictions of drow, the nalbrezu are a huge breath of fresh air. I’d even argue that the nalbrezu as a race are more player-friendly and balanced than the default drow. The torture rules are cool…but more importantly, even if you don’t want to use anything herein…this is a great read. No, seriously. Being written mostly in in-character prose, this pdf suckers you in, much like the nalbrezu themselves, and manages to slowly make you sympathize with these guys…which mirrors perfectly the devilish methods and ideology of the nalbrezu themselves. Fun, unique and radically different from all those tired takes on the drow, this is glorious and has a ton of great ideas. While not perfect, it is an inexpensive, fun and evocative supplement well worth a final verdict of 4.5 stars, rounded up to 5…and since I really enjoyed this book, I’ll also slap my seal of approval on this pdf.

You can get this evocative ecology-style supplement/ethnicity-guide here on OBS and here on d20pfsrd.com’s shop!