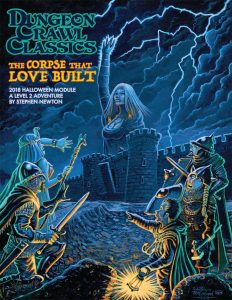 This module clocks in at 20 pages, 1 page front cover, 1 page editorial, 1 page advertisement, ½ a page SRD, 1 page back cover, leaving us with 15.5 pages of content, so let’s take a look!

This review was moved up in my reviewing queue because a patreon requested the other Halloween modules, and I’m somewhat OCD and needed to get this one done as well.

This module is intended for a 2nd level party, and a well-rounded party is preferable. PCs should be able to carry their weight in combat, but other than that, this has no requirements per se. The pdf presents well-written read-aloud text that oozes atmosphere, and the pdf does come with 24 introductory rumors that contextualize the module. These include, just fyi, some unobtrusive nods towards other DCC adventures – nice easter eggs there!

All right, you know the deal. The following is an adventure-review, and as such, the following contains massive SPOILERS. Potential players should jump ahead to the conclusion.

We begin this adventure with a storm raging outside of the church that the PCs attend – then the priest, father Giralt, who called the PCs there, pronounces that his patron has granted him a vision regarding the latest disappearances. This is received with collective groans and quips by everyone, only to have something interrupt the meeting: Faceless clay golems, sent forth by the villain, need to be stopped and, ironically, disperse doubts: Dr. Lotrin von Weißgras-Geisterblut (thanks for not butchering my native German in the name – the name translates to whitegrass-specterblood, fyi.), an eccentric elf, has finally gone off the deep end. (Btw.: The name and story implies strong connections to “They Served Brandolyn Red.”)

The elf lairs in a tower that is fashioned in the image of his lost love, and said tower (which you can see on the cover as well) lies basically behind a moat and wall – alternatively, PCs can brave the seas and cliffs, but most PCs will have to bypass the walls and guard-house. Preferably without being eaten by the creature in the moat…or killed by the Baron’s contraptions. The good doctor seems to have blended mechanics and organics, creating grotesque archer-things of sinew and metal, and similarly, the devices within his domain present an eerie blend here. Similarly, the “watchdogs” between the walls and tower are guarded by weredoggins, a blend of were-hounds and scorpions, emphasizing the mad-science vibe. Minor complaint: The pdf does feature a new spell that Geisterblut used to create these, and which, in the finale, may be a nasty surprise if a PC gets infected here, but there is no spell provided for the creation of the weird contraption monsters, though one is referenced in passing. Cut content?

The tower itself is a pretty small dungeon – the ground floor confronts the PCs with grotesque, luck-sucking lizard-things, and there is a vast staircase that extends up to the hand of the tower, where a maiden awaits rescue, currently trapped in a cage. From the cage, a massive and hard to damage coil of mithril transmits lightning from the tower’s hand into the cellar, where a meat cellar and an un-dead lab, including staked vampire-wights that PCs may inadvertently free, await. Really cool: The details of von Weißgras-Geisterblut’s research can be found throughout the lab, and the placement of traps and the puzzle door reward smart PCs: By understanding the doctor, they can ultimately enter his lab, wherein he tries to revive his love in the body of a giant version, cobbled together from giant body parts. He was successful. The middle of the module contains a massive two-page spread of the scene, with the mighty Bride Giant being an obvious homage to Bride of Frankenstein, thus culminating the module in a brutal and rewarding combat.

Editing and formatting are very good on a formal and rules-language level. Layout adheres to a two-column b/w-standard and the pdf has quite a lot of neat b/w-artworks. The cartography, isometric and amazing, is as good as we’ve come to expect from Goodman Games. Alas, we do not get player-friendly versions of the maps. The pdf comes fully bookmarked for your convenience.

Stephen Newton’s “The Corpse That Love Built” is a homage to classic horror movies: From hammer to the other b/w-classics, this takes a bow and presents a means to play such a plotline with grace and panache. The module walks the fine line between lampooning the genre, expressing admiration and taking itself seriously: This is atmospheric and creepy, genuinely dark, but it’s also hilarious and can be played for laughs, particularly if you and your players are familiar with old-school horror movies. While I frankly wished the module was slightly longer, it represents a great return to form for the DCC Halloween-modules after the atrocious “Shadows under Devil’s Reef.” This is not horror in the traditional sense – it is dark, but it also is a module you could run the monster mash to. In short, this is perhaps one of the most Halloween-y modules I’ve read, not because it regurgitates all the Halloween tropes, but because it gets the spirit. This is an excellent adventure, and well worth 5 stars, missing my seal of approval only by an inch due to its brevity, paired with the lack of player-friendly, key-less maps.