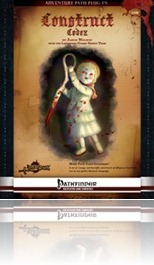 This pdf from Legendary Games is 28 pages long, 1 page front cover, 1 page ToC, 1 page editorial, 1 page introduction/how-to-use, 1 page contributor bios, 1 page SRD and 1 page back cover, leaving us with a total of 21 pages of content so let’s check this out!

The Construct Codex finds me with a weeping eye, as it constitutes, at least for now, Legendary Games’ last AP-plug-in for the gothic horror AP Carrion Crown, this time in the form of a mini-bestiary focused exclusively on constructs and thus it is only to be expected that the pdf kicks off with an introduction to the role of constructs in gothic horror settings and the carrion crown AP in particular. We also get two optional rules to better represent the creation of constructs, with the first requires research to create a particular construct, thus introducing the necessity for research in contrast to just taking a feat. Nice! The second optional rule introduced centres on uncreated constructs, i.e. constructs animated by the forces-that-be, the mists, malignant entities etc. and rules repercussions that may see them damaged by positive energy. To help the DM integrate the new beasties into the AP, suggestions for which locales would be appropriate for the constructs are also included before we delve into the creatures per se, with the first being:

The Bloodthirsty Manikin at CR 2 – which is frightsome indeed: Remember the carrionettes from Ravenloft? Well, these tiny dolls are their much more deadly brethren, coming with a death attack (!!!), a deceptive appearance and the option to reassemble themselves – awesome, albeit rather deadly! It should be noted that all constructs herein come with information on how to create them as well as full-colour artworks, some even on their own pages, thus allowing you to print out the artworks and hand them out to your players as hand-outs – awesome!

The second creature herein also comes with 3 signature abilities: Crowflight Carriages (CR 9), ghost carriages driven by a spectral drover including doom-inflicting whiplashes, the option to transport people (or….things) and a team of spectral horses. If that doesn’t strike you as iconic, I don’t know what will. The CR 14 Dirge Organ is essentially an immobile organ that can project an incorporeal avatar as well as play two special bardic performances as well as the option to mislead those ensnared by the haunting tunes it plays. There also are two variants of gothic gargoyles (CR 3 and 5), variant gargoyles that gain the option to crush down on foes and gradually petrify them with their attacks. Honestly, these gothic gargoyles are the superior monsters when compared to the standard stony warden-creatures, but still are essentially a variant that is not as stellar as the other creatures herein.

What immediately sets the record straight again is the shambling, deadly CR 10 Living Crematory! Yes! A cinder-cloud spewing crematory that ropes you into its combustion chamber via chains! YES! Words fail to describe how much I love this creature! In another blast from the past, we get stained glass golems, something I haven’t seen since the Ravenloft-days of AD&D, both as CR 3 and 7-versions and yeah, they come with trademark dazzling light, are almost 2d and can embed themselves in the window, while damaging foes that strike them via their shards. Smart, cool and full of iconic signature abilities – nothing to complain about…apart from the fact that I would have loved a high-level version with prismatic abilities, but maybe that’s just the sadist in me that enjoys hunting low-to-mid-level PCs with creatures far beyond their capabilities to defeat with mundane means.

The final 3 creatures in this tome are morgechs, cruel cyborg-amalgams of biological and mechanical elements that get their own subtype-abilities, being slightly more vulnerable than regular constructs, but also faster and come with jagged spikes and blades that make melee against them a painful experience. Humanoid Morgech Executors (CR 9) can throw bombs and come with extensive embedded weaponry and massive notes on the gruesome process of creating these beings. There also are CR Ravagers, based on deadly wolves and the final being would then be the CR 17 Griever, a truly deadly engine of destruction – 4-armed, expert swordsmen with supernaturally sharpened blades as well as a vastly enhances deflective capabilities.

Editing and formatting are top-notch, I didn’t notice a single glitch. Layout adheres to the landscape-format and a two-column standard, at least in my version of the pdf. There now is also a portrait-version, If you prefer that one. The pdf is extensively bookmarked and comes with a background-less version that is slightly more printer-friendly. As with all offerings by Legendary Games, this pdf’s layout is in full-color and stunning, gorgeous, drop-dead beautiful to behold. And the artworks. Oh boy, the artworks. Colby Stevenson and Jason Juta have created pieces herein that are gorgeous, could feature in an official Paizo-product and in fact may even surpass several artworks from APs. The artworks are all so iconic, cool and evocative that they make you immediately want to use these things.

Better yet, the crunch of all the creatures herein is up to the very highest demands – each creature herein comes with multiple, deadly, evocative, cool abilities and honestly, it is very rare I can voice no gripes. None. I have nothing to complain. Not even about the Gargoyle-variants. This pdf sets the bar higher for the whole class of monster-pdfs. Presentation, fluff, crunch – everything herein is TripleA+ in execution, presentation and quality. This is the best 3pp-monster-pdf in the small files-category released for PFRPG so far and redefines what one can expect from the whole genre of monster-books by 3pps. I am not only bereft of any points of criticism, even arbitrarily nitpicking at the page-count or something like that is simply not an option here. I can’t for the love of my life find anything about this book that would deserve anything but glowing praise. This is one of the rare pdfs that I’d rate 6 stars, if I could. I can’t, though and thus my final verdict will be 5 stars + endzeitgeist seal of approval: Even if you don’t run Carrion Crown – get this. It’s so rare I get blown away by any release anymore and this pdf really did it – so: Buy it and let’s hope for a sequel.

Construct Codex is available from: