Conduits of the Age (13th Age)

Conduits of the Age (13th Age) 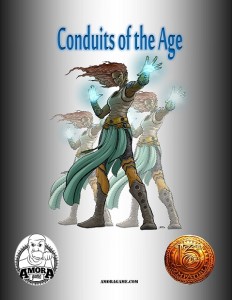 This conversion of the conduit-class clocks in at 10 pages, 1 page front cover, 1 page editorial, 2 pages of SRD, leaving us with 6 pages of content, so let’s take a look!

First thing you’ll notice is that the class pretty much follows the formula established in the 13th Age core books, with info on play style, popular races, etc. showing up. Attribute bonuses gained by the class (the usual +2) need to be applied to either Dex or Wis, though they can’t be stacked on the same attribute favored by the race chosen. Starting equipment contains melee weapon, ranged weapon, light armor and receive 25 gp starting gold (or 1d6 x 10). Regarding basic attacks and armor-preference, the class is leaning toward the rogue, with Dex being added to hit and damage. Damage bonus from ability modifier increases at 5th and 8th level, base Hit points are (7+Con mod)x3 at first level, scaling up to x24 at 10th level. Level up ability bonuses are granted at 4th, 7th and 10th level and a handy chart provides the conduit stats and over all – I was positively surprised. The rather complex class depiction of 13th Ag has been properly replicated here.

The defining class feature of the conduit, though, would be the conduct die: This begins at 1d6 as adventurer and increases to 1d8 at champion, 1d10 at epic tier. After a given heal-up, the conduit assigns a conduction power for which she meets the prerequisites to a side of the conduct die. When a side of the die is rolled, this means a conduct power is being rolled. The die is rolled twice The powers that were thus rolled are considered to be “charged”, whereas all other sides are considered to be “drained.” Repeat sides are rerolled in this process.

The careful reader may have noted some problems with this ability: One: Monster-level as damage is negligible, considering the amount of damage that flies around a 13th Age table. More importantly, though – 13th Age, alas, does not properly codify what is a magical attack and what isn’t. Granted, one can argue that the GM can easily make judgments as to this regard, but ultimately, this isn’t as easy as one would think – is a gaze attack magical? A dragon’s breath? Some guidelines would be nice here.

The class talents available allow for the modification of the conduct die and similarly, feats available for the class allow for more reliable playstyle for more score modifications and e.g. the charging of drained powers when rolling a charged power. Special mention deserves the Gigas Conduct talent, which increases die-size further by +1 – more variety and a larger arsenal, but also less control. Mystical Weapon allows for the potential expansion of either atk or damage, though the bonus die granted at low level may be a tad bit much.

But what conduct powers do we get? Well, a total of 16 such powers are provided and they include pretty much what you’d expect regarding single-use attacks and defensive tricks: Better initiative, melee force damage blasts, interrupt action MD-based means of making foes miss (NICE!) or healing – there are some nice options here. However, once again, the “magical effect” hydra rears its ugly head -Dissipation deals psychic damage and may also lock down “magical” abilities for the affected targets – which, as established before, are simply not defined in 13th Age. It should be noted, though, that balance-wise, this remains the only problem of the conduit powers presented herein.

Editing and formatting are top-notch, I noticed no significant glitches. Layout adheres to a two-column full-color standard and features nice full-color artworks, though personally, I dislike both the decorative diamonds and the blue/yellow-color-scheme. Still, this is a matter of taste and will not influence the final verdict. The pdf has no bookmarks, but needs none at this length.

Sasha Hall’s Conduit is a surprisingly awesome take on the concept: I expected some issues for the difficult concept and 13th Age’s rather intricate class design and encountered no brutal problems. More importantly than that, the conduct die is a truly unique playing experience that rendered the class an experience you can’t really compare to others – and that’s AWESOME. Seriously, once you’ve read so many classes like I have, jamais-vu-experiences become rare indeed, particularly when they actually work out as intended. The conduit, balance-wise, can be considered to range in the middle fields of 13th Age-classes – it is not weak per se, but the chaotic nature of the Conduct Die means that it plays in a unique style: Either you have excellent, variable damage…or tricks. Fans of quick-witted thinking at the table will certainly adore this class and I know the class has a place at my table. That being said, as much as I’d like to bestow my highest accolades on this class, I can’t do that – the “magical” effect issue puts an undue burden on the GM and represents a significant chink in the design of the otherwise compelling class. Finally, one note for potential expansions: The conduct die SCREAMS interaction with the escalation die to me – in fact, I can see myself writing powers and talents tying them together – the result can provide both planning AND escalate the chaos factor even further – which would be win-win in my book. Why this obvious, glorious possibility wasn’t yet used, I don’t know, but I hope for such interaction in a future.

How to rate this, then? The conduct die is sheer brilliance and I love the unique playstyle, but with the “magical effect”-hiccup, I unfortunately cannot go higher than 4 stars for this supplement. I still wholeheartedly encourage you to check this out, though – we’ve got some talent here that deserves being recognized, particularly for the exceedingly low price-point.

You can get this cool class here on OBS!