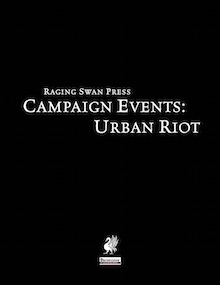 The second installment of the campaign events-series clocks in at 11 pages, 1 page front cover, 1 page advertisement, 1 page editorial, 1 page SRD, 1 page back cover, leaving us with 6 pages of content, so let’s take a look, shall we?

We begin this guide-book of dressing for the events of riots in the streets with a massive 100-entry strong table of miscellaneous dressings that reach from toppled statues to bloody teeth littering the streets in a rather grisly, appropriate background. Speaking of which – high priestesses torn apart and now-inedible stews mushes do one thing very well: They highlight different aspects of what it means when civilization as we know it and inhibitions are suspended, even if only for a short period of time.

Of course, it is not only the remnants of such events that constitute a riot (as opposed to a post apocalyptic dressing-book), but rather the individual things that can happen – which, then, would consist of no less than 100 minor events: From mobs forming to women crying to hooded hoodlums looking at intricately-carved doors to terrified nobles and dwarves buckling under the weight of their most cherished belongings, there are a lot of ways for PCs to get involved in whatever riot is currently going on in your campaign.

25 entries of fluff-only sample rioters, from uncanny doppelgangers to tattooed ex-convicts and graffiti-artists further complement this rich tapestry – and if your previous impression was akin to mine that the former tables didn’t 100% live up to the diversity and chaos one would expect, then rest assured that here, the book delivers an awesome diversity indeed. Where things get truly intriguing, beyond even the former table, would be in the hooks, complications and opportunities, of which no less than 20 are provided: When for example a local lord pardons a known serial killer in exchange for information on political rivals and asks the PCs to investigate the criminal’s claims while people are demanding the psycho’s execution, you indeed have an awesome story in scant 6 lines, one that just about writes itself. Or what if the populist bastard son of the city’s ruling class suddenly becomes the very symbol of freedom – what will happen then and there when he can or cannot live up to the symbolic charge endowed upon him by the body politic?

Editing and formatting are top-notch, as I’ve come to expect from Raging Swan press. Layout adheres to a 2-column b/w-standard and the pdf comes fully bookmarked for your convenience. It should also be noted that this pdf comes in two versions, one optimized for screen-use and one optimized for the printer – nice!

I won’t lie – the first two tables herein Nicholas Wasko provided did not elicit maximum excitement from me; perhaps this is due to me hoping for more weirdness featured; perhaps it is due to me simply having read too much in that vein. It doesn’t matter, ultimately, for what before looked like a good, if not stellar little pdf managed to turn everything around with the second half: Both the sample rioters and the complications in particular are downright inspired and leave you craving more, to the point where particularly the latter rank among the best hooks I’ve seen in such a section in quite a while, writing the adventures they spawn almost by themselves. Now, much like the former installment on masquerade balls, this is a good dressing-pdf, one bordering on great, but also one that left me with a tentative feeling that a bigger format with crunch blended in would have made the book even more useful.

Do not let this nagging fool you, though – this still is a very useful, neat dressing-pdf, one well worth a final verdict of 4.5 stars….though I do have to round down, since the first two tables could have used a tad bit more variety and deviations from the victim/perpetrator-dichotomy prevalent in the set-up itself.

You can get this nice dressing-pdf here on OBS and here on d20pfsrd.com’s shop!

You can get a king of subscription and support Raging Swan Press’ patreon here!