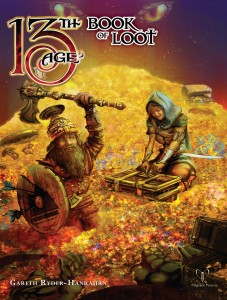 This book clocks in at 72 pages. I received this book in print for the purpose of an unbiased, critical review and it thus was moved up in my reviewing queue. Even if you are not interested in 13th Age, please read this review. Finally: I do not own the pdf version of this book, so I can’t comment on it.

All right, so if you’ve been reading my reviews for a while, you’ll know what my introductory spiel will be here: If there is one thing I loathe about d20-based systems, it would be that they wrecked magic. What do I mean by this? The massive rules-interaction possibilities and mathematical crafting rules ultimately enabled players to create their own legends, yes, but at the same time, the system necessitated a codification of magic items, armor, etc. via the paradigms of gold, spells known and feats invested. Ultimately, this practice led to a plethora of humorous posts on how the ecology in any such a world would not work properly (or be driven wholly by murder hobos…) – google it and you’ll surely find one or two such issues and I’m not even scratching the surface here.

While I am perhaps one of the more anal-retentive GMs out there regarding the feeling of the world I play in, one of the guys who design customs, rune-languages etc. to enhance internal consistency of a world, this component is surprisingly not the one that has irked me the most. What has galled me to no end is that magic just lost its luster and glory, it became not only easy to codify, it became predictable, with all unpredictability stemming ultimately from a huge array of sourcebooks that not only perpetuated power escalation among options like spells, but ultimately also among magic items based on said spells. With the Christmas-tree syndrome becoming more and more apparent (and loathed by at least a certain part of the target demographic), alternate means of power gain closer to our beloved fictional narratives were sought, found and implemented, with legacy weapons being refined into legendary weapons over the years and various system-modifications allowing for a playstyle that does not hinge on covering your PC in more magical bling than an early 90s rapper. (Note: While I am a goth/metal-head, I actually like hip hop…go figure, this was not a barb.)

Now 13th Age does several thing right with the magical items – from potential jealousy to quirks that are projected onto the character, the basic premise of 13th Age imho managed to offset this exceedingly grievous complaint many a person has with magic items: In 13th Age, magical items may once again feel like MAGIC, like something unpredictable. Now yes, the 13th Age system does assume the Iconics as movers and shakers and if you recall my review of the core book, I wasn’t too thrilled by them. Now obviously, the items herein are grouped by iconic that created them (or that thematically fits them) – and honestly, the items provide more indirect characterization of the respective iconics than the base book’s write-up. The Archmage’s pomp, the Diabolist’s reality-rending, the difference between the savage magic of the High Druid and the Emperor – the item classes actually feel differently o an extent I did not anticipate.

And yes, this book does have, obviously, some traditionally “useful” items – like a robe that teleports you out of danger when you reach 0 HP or an armor that deals fire damage to any supernatural being teleporting while in your proximity. It is not these items that have made me grin, almost continuously, from ear to ear while reading this book – it is the sheer, vast, huge imaginative potential of the items herein: Take for example the Dwarf King – a beard of entanglement is at the same time ridiculous and awesome – it has the whimsical quality I expect from magic. Or take the incredibly faithful hat that will show up EVERYWHERE you end up, including the 3 items you put in its compartments. I quote the book: “[…]stripped naked, hurled through a portal into the abyss and carried by a demonic roc to its nest in an uncharted, infernal mountain range -and you’ll find your hat waiting there.” And yes, you pet your hat as if it were a pet. This is awesome on so many levels!

Students of classic literature will surely enjoy the helm that can go full-blown Castle of Otranto as a defensible watchtower, while advocates of a certain barbarian and his timeless question of what is best in life most certainly will enjoy the throne-threading sandals. Now if you’re like me, these examples alone (by far not the only ones, btw.!) will be enough to make you love this book, but if you don’t have humor and do not enjoy this type of thing, then rest assured that there are enough “serious” items herein – what about e.g. a ring that declares you as one of the Elf Queen’s consorts for your easy and daily fix of debauchery and court politics? Or what about the literal hand of winter that may or may not force you to draw the season back to where it belongs once it gets out of control? Or perhaps you prefer the more subtle side of things and with it a girdle that makes you the ultimate chameleon – but perhaps at the cost of finding out that interpersonal interaction and potential conflict ultimately are a crucial component that defines us.

Beyond these glorious, specific items, treasure trove generators, general item-creation advice and concise lists of items by chakra and a few potions and oils further complement this absolutely stunning book.

Editing and formatting are top-notch, I noticed no significant glitches. Layout adheres to a nice two-column b/w-standard and the book comes softbound and on glossy, thick high-quality paper that withstood my page-skipping while I was sweating terribly due to my Scandinavian ancestry.

This book, much like the superb Bestiary of 13th Age, is more inspired than I ever believed it to be possible – the Book of Loot was NOT a book I looked forward to reading and when I did, I was continuously and constantly blown away – so much so, that I have used A LOT of the items herein – in 13th Age, PFRPG, DCC – their playfulness and imaginative potential is downright genius and they bring back a sense of the unpredictable, of the MAGICAL.

Author Gareth Ryder-Hanrahan delivers an absolutely stunning assortment of items that breathe narrative potential, that inspire, that actually feel like they could spring straight from the pages of your favorite fantasy novels, with the vast majority of them being able to support a story all on their own – or even a campaign. Add to that the novice-friendly advice in the beginning and we have a book that is a little masterpiece – it constitutes one of the best magic item books I’ve read since 2nd edition and brings back defining characteristics of what magic items can be – more than a sum of endlessly recombined numbers, bonuses and parts, more than just a mathematical bonus-machinery. And yes, there are such items herein, but ultimately, even these have some sort of component that makes them transcend their system-dependency. I consider this book an excellent buy for all d20-based systems and as such, this book receives 5 stars + my seal of approval and status as a candidate of my Top Ten of 2015 – a capable GM who understands the mechanics of 13th Age and another system can easily convert them. GLORIOUS!

You can get this superb collection of magic items here on OBS!