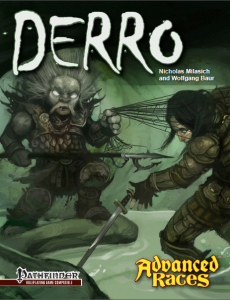 Okay, I’ll come right out and say it -I love the derro as a concept and as adversaries. There is something downright awesome…add a slice of Lovecraftiana and CoC/ToC-fanboy yours truly has not much to complain about concept-wise. However, this pdf goes one step beyond that, providing thoroughly unique concepts like the “Imposition of the Will” – which hearkens back to a certain other infamous real life statement and represents the strange surges of fads and concepts that grip the collectively insane derro culture. Which also brings me to another component of the fluff – if you’re like me and can’t turn off your critical reading skills, you’ll notice that the derro and their whole culture can arguably be read as a pretty black satire on mass media Web 2.0-culture – which fluff-wise provides the icing on the cake.

Now the central component of a derro would be the racial insanity, right? well, thankfully, this installment does provide some troubleshooting and concise advice for players who wish to play such a character and still retain the functionality of the group/character. The derro herein do receive full age, height and weight tables as well as favored class options for alchemist, bard, barbarian, druid, fighter, inquisitor, magus, oracle, ranger, rogue, sorceror and witch. All of the FCOs are thematically fitting and well-balanced and players also receive a nice selection of suggested, thematically fitting archetype/character concept choices.

Now I consider the RP-values of the ARG anything but functional, but even a cursory glimpse of the derro will show you that these guys are too strong for most groups – hence, as a player race, the lesser derro is introduced. These guys receive +2 to Dex and Cha, small, have a base speed of 20 ft., receive darkvision 60 ft., gain keen senses and light sensitivity and may cast ghost sound 3/day as an SP. They also receive familiarity with certain weapons and poison use. Know what? NOTHING to complain! Balanced between physical and mental, with solid tricks, this base race fits into EVERY campaign, even the most conservative of groups. Kudos! Now what this pdf does beyond that is interesting – it provides the racial traits to upgrade them to full-blown derro. Yes, this means that even high-power groups receive their due. Kudos! While there are cosmetic glitches in the presentation here (like Dex coming after cha or a “+” missing), these glitches are cosmetic and do not detract at all from the appeal of these base racial stat-arrays. Of course, either derro kind is mad and thus use their cha-mod for will-saves instead of wis and gains a minor madness. In Midgard, derro receive a status-penalty.

A total of 8 alternate racial traits allow a player to customize a derro to have less darkvision, but also no light sensitivity, better social skills when dealing with aberrations, chaos magic-synergy (see Deep Magic), more minor SPs, speaking to vermin. What about a mad obsession with a particular skill that increases all skill bonuses of +2 to the skill to +3 at the cost of an additional minor madness?

The Knowledge (Forbidden Lore) skill also receives a short introduction and then, we receive madness tables – 5 of them. Minor madness can point towards small objects, living creatures, delusions, physical effects -pretty awesome! Derro nomenclature is covered herein as well – fluff-wise, once again, absolutely awesome – and in opposition to the installment on gnolls, much closer to being a suitable player-race…at least so far.

A total of 6 new feats is provided – from the relatively standard verminspeaker (guess thrice what that one does…yeah) to gaining sneak attack +1d6 at the cost of more madness and a skill-bonus-feat to increase intimidate – and further boost that by taking wis-damage. Interesting! Cooler – what about being a compulsive hoarder who can scatter sharp objects as essentially a respawning caltrop array? Yeah, cool! On the metamagic-side, chaosfire makes for an interesting madness-influenced chaos magic and yes, there is a story feat – Pierce the Veil. Well, in order to fulfill that, you have to make contact with a cozy entity like good ole’ Nyarly. Sounds like fun, doesn’t it? Well, permanent SPs wink among those completion benefits…

Two cool traits can also be found in these pages, as can 3 spells: What about the gleefully random madfire? And yes, facemelt and skullsplitter are just as nasty as you’d expect them to be. Magical fauchards, the dread weeping poison, ghost bolts, foul statues of hateful gods and dread staves also speak a pretty clear language…

The pdf also sports archetypes, the first of which would be the Fist of Madness, who may use derro weapons as monk weapons, receives a modified skill list and instead of stunning fists, these guys can transport confusing madness with their attacks. The ki the class gains (powered by Cha, which also governs the archetype’s AC-bonus btw.) can be used to temporarily grant defensive boosts and miss chances. The archetype may also poach among ninja tricks and later unleash confusion-causing bursts. Their ki strike is chaotic and instead of causing death at high levels, these guys can instill permanent mayor insanities. The capstone is also interesting -permanent circle of protection: law may seem lame…then you read that they can manipulate gravity freely in this area. Yeah. This is pretty awesome.

The second archetype is a small one, the monstrophile ranger, who instead applies his empathy to monstrous animals, unintelligent aberrations, vermin and oozes and the ranger also receives a vermin, reptile or amphibian companion…or an ooze companion! GO CUBEY! Awesome.

The Shadow Antipaladin receives no heavy armor proficiency, smite law, an insanity/confusion-debuff aura, evasion and additional cruelties themed around insanity and sneak attack-progression. At higher levels DR enters the frame and the capstone renders the antipaladin into a constant source of insanity against all those serving law and order.

Finally, the pdf provides the new derro savant-bloodline, allowing for characters descendant (best not dwell on HOW) from the insane derro fetal savants. This bloodline is centered on knowledge and an entrancing gaze and receives a capstone for permanent enslaving of subjects.

Editing and formatting are very good – while I noticed some minor glitches, the pdf can be considered very well crafted in that regard. Layout adheres to Kobold Press’ two-column full-color standard and the artworks provided, while probably familiar to KP-fans, are nice. the pdf comes fully bookmarked for your convenience.

Let’s get one thing out of the way – derro are insane. they are nasty and as a race, an unpleasant bunch. They are also a race I would never have allowed as a PC-race. I just didn’t want them “diluted” in their nastiness.

But unlike the installment on gnolls, this feels like it is intended for players – the archetypes universally have multiple interesting concepts going for them and do not require membership in odd cabals. They provide unique mechanical benefits. the pdf provides ample help for portraying the insane derro.

The new feats/content, in the vast majority of cases, is just cool. That, and the derro with their madness and fads, have a great rationale for why a certain derro might become an adventurer that helps a group/is a PC. Author Nicholas Milasich has improved SIGNIFICANTLY since the last pdf I read by his pen…and you can definitely see the writing of Kobold-in-chief Wolfgang Baur in this pdf. This AR is a great read; it is interesting, balanced and provides an array of more than solid options. Yes, I could nitpick some of the minor hiccups, but they remain just that – in the end, this is quite frankly one of the most inspired, awesome supplements in the whole series. Good enough, in fact, to allow this pdf among the available PC-races in my own campaign and revise my stance on “No Derro PCs.”

The final verdict, then, should come as no surprise: 5 stars + seal of approval. This exemplifies what the AR-series should be about, quality-wise.

You can get this damn cool installment of the series here on OBS – get it and gibber with glee!