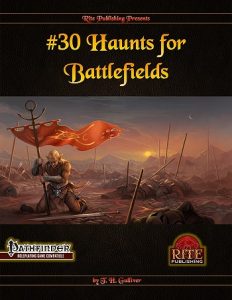 This installment of Rite Publishing’s #30-series clocks in at 16 pages, 1 page front cover, 1 page editorial, 1 page SRD, 1 page advertisement, leaving us with 12 pages of content, so let’s take a look!

We begin this little pdf with a summary of the nature of haunts and how they operate, making the use of this pdf as painless and book-flipping-less as possible. After this brief explanation, persistent and minor haunts are explained and then we’re right in the subject matter – haunts for battlefields.

This book pretty much offers exactly what it says on the tin, with haunts in the pages ranging in CR from CR 1 to CR 12. The effects of the haunts themselves, are diverse: From an overwhelming sense of battle-weariness to visions of burning barracks that may boil your blood to the haunting choir of prisoners sacrificed or executed, there is a lot to be found in this pdf.

The selection of haunt covers both the common (e.g. ear-piercing screams) to remnants of contagion that can be abated by planting a red spider-lily (all Japanese culture buffs out there, rejoice!). From the unsettling experience of watching dead birds emit unnerving cackles to the very earth growing acidic, detonating pustules, the pdf strikes a lot of tones – and it does so well: Both the somber aftermath and experience between the fighting and the pure chaos of warfare have their haunted representations amid these offerings, with destruction often pointing to and underlining the respective truth beyond the creation of the haunt.

In fact, the variance between modes and themes of haunts can be easily evoked by using haunts as transitionary elements – there are some that feature the dins of battle, which could conceivably used as great out- and in-game audio-cues to signify a transition from the somber to the chaotic and lethal aspect of warfare. The very earth grasping for the living, being carried away against one’s will by a phantom horde, carpenter’s tools used creatively by a torturer, the nascent greed of traumatic pillaging echoing through an area, phantoms of the dying projectile-vomiting acidic blood, rapid decomposition of the fallen and the very earth’s mouth trying to swallow those whole that thread upon it – the diversity of the haunts herein is more than sufficient, and they may actually all be stringed together to form a truly nightmarish hell-hole of a battleground, often with means of combining the haunts already included:

When two haunts refer to barracks burning and work potentially well together, the GM simply has his work cut out for himself…

Editing and formatting are top-notch, I noticed no significant glitches. Layout adheres to Rite Publishing’s classic two-column full-color standard and the pdf comes with a blend of full-color art I haven’t seen before. The pdf comes fully bookmarked for your convenience.

It feels almost like another life since I last reviewed a haunt book by T.H. Gulliver. The haunts books for the #30-series, universally remain my go-to default address for haunts: Precise, deadly, evocative and yet easy to plug into a given context, the books are classics…and so is this one. For a more than fair price, you get an evocative array of fun haunts that enriches the game…or an adventure. I firmly believe that a good GM can string these together as a great adventure locale or even as a mid-level adventure that requires exactly no combat encounters…just this eerie, forlorn battlefield, where the earth itself keens and loathes those that have savaged it. A great and evocative pdf, this is well worth 5 stars + seal of approval.

You can get this glorious collection of haunts here on OBS!