Shadows over Vathak: Feats of Devotion and Deliverance (5e) 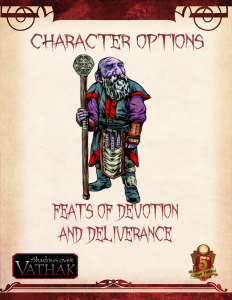 So, the one page of this supplement contains 3 new feats, with the first being Bestow Piety, which requires proficiency in Intelligence (Religion) or the ability to Channel Divinity to take it. The feat nets you one use of Channel Divinity, or increases your uses of the feature by 1 before you need to finish a short or long rest. When you take the feat, you choose one of 3 options: Purity lets you create a cylinder that protects from poisoned condition, grants resistance to poison damage if the targets do not have it, and those affected by poison or disease get a reroll to end the effect unless it’s caused by a curse. Cool! Hope lets you ward up to three creatures against fear for 1 hour, and also nets inspiration; frightened creatures get a reroll. Clarity nets a 1-hour aura that nets advantage on saves against madness or effects like confusion, and it can be triggered as a reaction—I assume to such an effect, though the verbiage does not specify this. That being said, this is a minor nitpick, and the feat can be chosen multiple times, it effects stacking, and each time nets a new ability.

The second feat, Disciplined Mind, requires a Wisdom of 11+ and increases Wisdom by 1, to a maximum of 20. It nets advantage on saving throws vs. the frightened condition, and to remove it. The feat also nets advantage on saves vs. the charmed condition if it originated from an aberration, fiend or undead, and you are always aware of attempts to read your mind. Interesting!

Slayer of Horrors, finally, has no prerequisite and lets you choose either aberrations, fiends or undead. Against the chosen type, you 1/turn add proficiency bonus to damage and 1/turn ignore one type of resistance of the chosen enemy when making an attack. (So does not work for spells etc. that require no attack.) Thirdly, you may, as a reaction, distract a creature of the chosen type as it attacks, but before it rolls. The creature makes the attack at disadvantage. This one only can be sued once before needing a short or long rest to use it again. I am generally not the biggest fan of specialized creature type hunting abilities, but as far as they are concerned, this is a solid payoff, considering the cost of feats in 5e. There is but one thing my personal aesthetics would require: Stating that the character needs to know about the creature facing them being of their chosen type. It’s a small thing, but considering the prevalence of body-snatching, possession and illusions, it’s imho an important one.

Editing and formatting are very good on a formal and rules level. Layout adheres to a nice full-color two-column standard. The pdf has no bookmarks, but needs none.

Ismael Alvarez’ three feats herein are pretty cool and worthwhile. They balance cost and benefit well, can unlock some cool adventure scenarios, and are presented in a tight manner. Apart from minor nitpickery in the final feat, I have no serious complaints, which means that my final verdict will clock in at 4.5 stars, and I’ll be rounding up due to the low and fair price-point.

You can get this inexpensive pdf for just a single buck here on OBS!