Files for Everybody: Mephians (PF2) 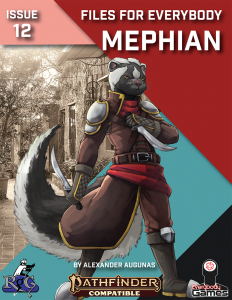 This installment of the „Files for Everybody“-series clocks in at 21 pages, 1 page front cover, 1 page editorial, 1 page introduction (which also features advice on using them and some info on their musk in a sidebar), 2 pages of SRD, leaving us with 16 pages of content, so let’s take a look!

So, mephians…it’s one of the rather interesting anthro races/ancestries introduced by Everybody Games for various systems, and it was always one near and dear to my heart (cue tons of bad Lacrimosa goth in-jokes); much like in previous treatments of such ancestries for e.g. the yroometji, the mephians in this installment receive quite a lot of rather interesting options and flavor.

Now, I know that you may be already familiar with this, but it’s important and something I very much feel like I need to address it: The mephian-treatment herein does feature not only a significant amount of rules-relevant material, the pdf also spends some space to actually contextualize the ancestry, explaining, for example, life cycle and physiology, but also providing a glimpse at the culture, which includes notes on architecture, cuisine, relationship with other species, etc. Their language is also touched upon, just fyi. I won’t ever tire of mentioning how important that sort of thing is to me. This information is what sets apart a different set of numbers for a weird-looking human and a genuinely plausible different species.

So yeah, as far as I’m concerned, this should be standard throughout the industry, regardless of system. Of course, the pdf also includes the “If you are a mephian…” and “Others will likely…”-sections. Rules-wise, the core ancestry provides 10 HP, 25 ft. speed, Medium size, a nonlethal tail slap attack for 1d6 bludgeoning damage, and the ability to secrete musk. This is a one-.action ability, usable once per hour, that has the poison trait. If your next action is a tail slap and hits, the enemy must make a Fortitude save, becoming sickened 1 on a failed save, sickened 2 on a critical failure, and trying to detect the target who failed the save via scent makes the sense one step more precise. On a critical failure, the sickened condition value can’t be reduced for a certain period. Okay, this alone already changes how mephians play when contrasted to other ancestries…which is a good thing.

Ethnicities are included in the discussion of the species as well, and in an interesting and applaudable decision, do NOT correlate with the heritages you get to choose from; a total of 10 heritages are provided. Artisans are trained in Craft and receive Specialty Crafting, and add the feat’s circumstance bonus to checks to Earn Income with Crafting. Atheist mephians get a +1 status bonus to AC and saves vs. divine spells and abilities, plus resistance equal to ½ level against damage from divine spells and abilities. Communal mephians choose a multiclass dedication feat for a class other than theirs, even if they don’t meet the level prerequisite. Other prerequisites must still be met. Empath mephians learn the attitude of targets when they (critically) succeed Sense Motive and become expert in Perception. Honeyfurs get Toughness, and the DC of recovery checks is 8 + dying value. Ironbellies get a +1 circumstance bonus to Fortitude saves vs. ingested poisons and effects that cause the sickened condition. They also can recover more easily from being sickened, Muskwallows get 3 additional musk uses per hour, stacking with other increases. Sojourners get Additional Lore, choose two subcategories and get two additional skill increases at indicated levels that must be applied to the chosen categories. Traditionalists get a 1st-level ancestry feat, and weldbond mephians get a primal cantrip as an innate spell at will, with heightening of up to ½ your level.

Eleven 1st-level ancestry feats are provided, and the benefits include a +4 circumstance bonus on checks to Aid, using Diplomacy instead of Perception to Sense Motive due to your empathy, gaining imprecise scent, and using your tail in a quasi shield-like manner, with the one-action option to raise it; the balancing caveat here is that, if your tail gets disabled by excess damage, you can’t raise it or secrete musk until you’ve been the recipient of Treat Wounds. Speaking of musk: More uses are available, and if you buy into the sequence, you can get rid of the cooldown frequency. Suffice to say, you can make acid -based musk pitch Strikes. The tail-focus can be further emphasized by unlocking weapon traits for it, or add one trait and increase base damage.

The 5th-level feats (4 total) include musk and tail slap Strike in one swoop, Mephian Unarmed Expertise (what it says on the tin), an upgrade to musk that renders targets flat-footed while they Retch (or regardless, on a critical failure), and Fume Musk lets you AoE musk as two actions. Three 9th-level feats further build on communal focus when using Aid, a new degree of success array for musk (that can theoretically maintain the stench for weeks!), and the option to potentially temporarily blind targets. 3 13th-level feats complement the array, with one having an erroneous prerequisite reference: That should be “Mephian Unarmed Expertise”, not “Mephian Unarmed Cunning” (the latter feat does not exist); the feats here include save DC increases, building on the tail slap potency, and a one-action Stance that makes the raised tail constant.

I generally enjoyed the array of options presented here; they are well in line of the default ancestries, and the tail/musk interplay does allow for potentially rather interesting playing experiences. As for the class options included, we do get a new alchemist research field (aromachologist), which is interwoven with perhaps my favorite component of this pdf, namely the introduction of a whole new type of alchemical items, namely perfumes, ranging in item levels from 1 to 20, with power per perfume available in 4 steps. Perfumes can be unstopped, or they can be thrown (different number of hands required!), and they can be offensive or defensive: Ill-Be-Gone Perfume, for example, in its most basic form helps against diseases and the sickened condition, but at increased potency, we’re looking at quickened, but only usable to Retch. Of course, we also have attitude enhancers, perfumes that stupefy targets…or what about a perfume that provides debuffs, but also resistances? 10 perfumes, all with 4 versions (and yes, they do have the Bomb trait), are included.

…I’m a bit of a dandy. I am inordinately fond of some perfumes, including ones featuring Oud. This is right up my alley, and mechanically, the flexibility inherent in the base item category also is something I enjoy. If this sounds cool to you and you want flexible buffing/debuffing/soft terrain control, then this will be right up your alley. And yes, wind-interaction etc. are included in the rules. With the muskologist archetype, mephians can lean into the cool perfume angle, and even learn to infuse alchemical perfumes in the mephian’s musk! Super cool.

While we’re talking about dandyism: The dandy rogue racket is cool: They gain the no-action ability to Showboat, which can add mental damage to Strikes based on your Charisma, and potentially Demoralize or Feint them, and two rogue feats build on that. Nice!  The guardian barbarian instinct is an interesting defensive-minded angle that makes sense within the culture, allowing you to take hits for allies in reach. Bards get four rather cool feats that build on inspire courage/defense and let you grant Sudden Charge, or reduce actions required. A healing song is also provided, with anti-abuse caveats. The final feats unlock the two bard composition focus spells included.

Oh, and guess what? Godless cleric? Yeah, check. If you’d rather be a humanist, someone who cares about connections with mortals…then this one delivers that as well.

Editing and formatting are very good on a formal level and on a rules-language level; apart from a minor hiccup that doesn’t really affect rules integrity, this is one complex and creative operation.  Layout adheres to the series’ two-column full-color standard, and the original piece of artwork is nice. The pdf comes fully bookmarked with detailed, nested bookmarks, making navigation comfortable and swift – kudos!

Okay, please give me a second for a bit of story time. At one point, I was very frustrated with uncommon ancestries/races; because they felt like a pile of lame bonuses (or excessive ones) jammed on top of what were essentially weird-looking humanoids that didn’t fit. The implementation, back then, tended to be either a) bland, b) overpowered, or c) both.

This stance has since then changed rather significantly, and a large reason would be Alexander Augunas’ design for ancestries/species/races. The author has consistently tackled species I did not like, heck, even ones I positively loathed, and breathed life into the. For Starfinder, he has written some of my absolute favorite playable species. For PF1, he has made vishkanya, wayang, nagaji, etc. unique & interesting, more than just an array of stats.

It should come as no surprise, then, that his ancestry-designs for PF2 have been absolutely inspired so far, and I don’t expect that to change any time soon. The flavor is glorious, and actually hits several things I’m inordinately fond of, from the godless cleric to the dandy, finally culminating in perfumes (Can I haz moar, plox?), this touches on concepts I adore.

From a design perspective, the supplement makes great use of PF2’s options and allows you to play a character that manages to deliver a playing experience that is distinct from the core ancestries. Now, at first glance, the perfumes do look a bit weird, but once you put the pieces together and get what they actually do, you’ll be smiling from ear to ear.

This is the best iteration of mephians so far, and it serves as a great benchmark for what ancestry-books for PF2 should deliver: Plausible flavor, unique stratagems, thematically-consistent options.

5 stars + seal of approval. Get this. And while you’re at it, all other ancestry-books in the line as well.

You can get this awesome ancestry here on OBS!

Missed the delightful Nashi? You can find them here!

The yroometji can be found here!

If this review was helpful for you, consider leaving a tip via paypal, or joining my patreon here. Thank you!