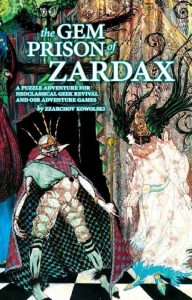 So, this is, thematically, a pretty radical departure from Zazrchov Kowolski’s usual fare – instead of the plausible low-powered dark fantasy we usually expect, we get a psychedelic funhouse dungeon, which is also represented in the artworks, which this time around, have been presented by Scrap Princess – and there are a LOT of them; many of the rooms get their own little artwork, and the new critters also get their artworks. Now, Scrap’s art is divisive, but I generally tend to LIKE the frantic energy they exude – however, it should be noted that this time around, the artworks are in full color, and personally, I don’t think the use of lots of colors suits the style that well. Artwork is subjective, but I figured I’d mention it nonetheless. On the plus side, the excessive use of bright colors in Scrap’s artwork might have been a deliberate choice to drive home how tacky the dungeon is supposed to feel.

But I digress. As usual for Zzarchov Kowolski’s self-published modules, we get two rules systems – NGR (Neoclassical Geek Revival) and OSR – the latter not adhering to a specific system, instead noting movement, AC etc. in relation to other creatures/items, etc. – AC “as chain”, that sort of thing. I am not a fan of this, preferring proper adherence to a specific system, but I won’t penalize the book for that, particularly because the rules don’t suffer – when e.g. picking locks and similar scenarios are concerned, e.g. percentile, x-in-d6 and similar solutions are noted. The module is designated for a party of characters for levels 3-6, and indeed, some experience and prowess is strongly suggested; the module *can* be rather brutal.

The module lists the color of the walls for every room, and each room also has its little map right in the room’s description – and these room maps are player-friendly! Huge kudos for that! The supplement offers a random treasure and a random encounter table, and a book generator, and if you’re using NGR to play this (imho the better experience – plus, I really like the rules system!), there also is a spell generator here, with each component of the spell offering 6 variants, making use not only of NGR’s neat magic system and its versatility, but also providing quite a bit of bang for buck in that regard. Furthermore, NGR gets 8 fully-crafted spells in addition to this.

The module color codes system-specific text – NGR text tends to be mint-green, OSR text a bit beige/greenish. The module does not feature read-aloud text. The treasure presented is also pretty neat, going so far as to e.g. describing mundane items like glass coins and the like; formatting of magic items does not adhere to the most common OSR-conventions.

Difficulty-wise, this is clearly aimed at experienced roleplayers – you can potentially TPK the group rather easily, but as a whole, the challenges tend to be pretty fair; personally, I’d suggest this module for the higher end of its suggested level-range; tackling this at level 3 would be a rather brutal test of survival.

Okay, so, there is one more thing to note: You need to do a bit of prep work, namely generate a couple of strings of dicerolls and put them on paper. Why? We’ll get to that. The module is billed as a puzzle dungeon, and it is not necessarily a simple one – there is a handout page of glyphs, and each room has a glyph. And the glyphs mean…well. There is a bit of a potential issue. The module does DELIBERATELY refrain from explaining its puzzle per se; the GM is giving ample information (which the player’ll have to deduce in actual play) to figure out how this is supposed to operate. It’s not hard, mind you – but for some GMs who are bad with puzzles themselves, but who have parties who enjoy them, this might be a problem.

The intention, obviously, was to make a puzzle that the GM can’t cheat, that the GM has to figure out. As this was the author’s intent, I am not going to spoil the puzzle’s solution here. I thought about doing that, but since the module can actually be solved by brute-forcing it, I ended up deciding that doing so would not be in the spirit of the adventure. Note that, if the party is not smart, trying to escape might well require a sacrifice.

Okay, only GMs around? Great! So, there is the eponymous Zardax, a wizard of bad temper and worse taste, who happened to come into possession of this nifty gem-prison (Ravenloft flashback right there…) – while rumors suggest otherwise, holding the gem aloft in moonlight will transport you into the entry room of the dungeon – and the former dungeon has been redecorated in the most tacky of ways, with walls painted in different colors, etc. – the obvious Zardoz reference implied by the name is certainly somewhat present in the aesthetics – if Zardoz had such a prison, he’d have probably done something like this with it.

The extradimensional prison angle explains the diverse inhabitants: There are giant eyes firing lazzz000rz, protected by regenerating energy barriers, cat-headed elves, extraterrestrial ice-people trapped in a “scorching hellhole” 15 below freezing; they also think they are elves. Oh, and there are bosses – like the giant silver wasp, and Azoozl. The latter is essentially a lich who occupies 5 identical wraith bodies who share a pool of memorized spells and hit points – this one is pretty darn deadly if the party isn’t really smart. The wasp has a whopping 12 HD – so yeah, this is an old-school module that requires that the players play smart; murderhobo-attempts will cause TPKs here.

Now, I previously mentioned requiring some pregenerated numbers: You need to roll a d20 thirty or so times, and jot down the sequence.; then roll d8, d6 and d4 twenty to thirty or so times, writing that down; Azoozl needs spells if playing this in OSR. The three smaller dice can be used for encounters and treasures, while the d20 provides the initial sequence of the prison’s twenty rooms, which does mean that this has some replay value for the GM.

You see, the dungeon has essentially energy fields (portals, pretty much like the game) between rooms; most are reddish-orange, but designated cells have blue energy fields; at the center of each field is a copper plate shaped like a human hand, with the current room’s glyph (not the destination!) inside. Pressing the plate causes the portal to disappear, showing a random room based the sequence you rolled on the other side; such doorways stay open for 30 seconds, with a mist as a hint that it’ll close very soon – and being inside while it closes is not healthy. Here’s the crucial bit: As long as a sentient member of the party is on both sides of the portal, it locks itself in place. That is, opening it again will show the previous room, not a random one. So no, unless parties are pretty careless, they won’t be split – but the danger yet remains. I like that.

As an aside – once you run out of pregenerated numbers, you’re supposed to start rolling; this way, the players a get a metagaming hint as to the structure of the module. Having the pre-prepared sequence of numbers conceals the random nature for a bit. Add to that a room where the exit is mirrored by +(- 10 and similar tricks, and we have an interesting brain teaser. (Minor hint for GMs stuck with the code: Take a look at the symbols of this one, and compare it to another room with two entries.)

But how do you escape? Well, there is the exit portal guarded by non-hostile owl-headed warriors. Pretty decent chaps, really – they’re supposed to guard this place, as they’ve been tricked into providing their real names, but can shirk their duty and let the party leave…they just want a little “cannibaliscious feast” – if one party member volunteers to be eaten alive, they can get out. Trying to pick the lock of the exit portal is another means to escape by sacrifice and good roll: The door starts building up energy, which is potentially VERY lethal – and the chances to pick this are BAD. Still, theoretically, it’s possible. However, there is also one key hidden in the dungeon – said key can negate the lock’s magic…if the party finds it and realizes what it is, that is.

Editing is very good on a formal and rules-language, while formatting could be a bit more consistent: The exit room’s NGR-rules, for example, aren’t colored, and same goes for the OSR-rules here. Layout adheres to a two-column b/w-standard without much frills, and uses colored highlights in room numbers, with Scrap princess’ artwork presented in full color. The b/w-cartography is pretty basic, but also uses some color highlights – being player-friendly is a huge plus here. The pdf comes fully bookmarked for your convenience.

Zzarchov Kowolski’s “The Gem Prison of Zardax” is a nice change of pace; it is strange and does the funhouse dungeon with a twist angle very well; it’s dangerous, and clever use of the dungeon can seriously help dealing with the potent inhabitants of the prison: Players are rewarded for being smart here.

I might catch some flack for this, but here goes: I don’t think that the dungeon does a particularly good job regarding its “puzzle” aspects. Since the module can be solved by brute-forcing it, there is a decent chance that the players might not even need to solve the code.  Unless I am missing something, I am also pretty sure that the code can be interpreted in more than one way. Whether you consider that a feature or a bug, I’ll leave up to you – personally, I’d have preferred a code that is simpler, but which has just one solution. I’d also have preferred it if the players had to, you know, actually solve the code to escape.

That being said, even if your players never decode the code/bother with it (happened in my test), the module still operates as a puzzle dungeon (in a lesser capacity), which is most assuredly a plus. As a whole, I consider this to a successful, if not perfect adventure, and thus, my final verdict will be 4 stars.

You can get the pdf-version here on OBS!

If you want this in print, it’s part of Zzarchov Kowolski’s Adventure Omnbibus Vol.1, a limited edition book currently briefly available via the kickstarter for Vol.2. If you missed out on it, here’s your chance. The KS only has 4 days to go – you can find it here.