Files for Everybody: Athletics Feats (PF2) 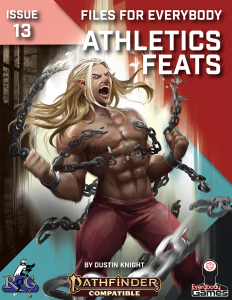 This installment of the Files for Everybody series clocks in at 7 pages, 1 page front cover, 1 page editorial, 1 page introduction (though that also contains relevant content!), 2 pages of SRD, leaving us with 2 pages of content, plus that aforementioned content on the intro page, so let’s take a look!

All right, so the intro page has the Parkour Specialist background, which nets two ability boosts, one of which must be Strength or Dexterity; the background also nets trained status in Athletics and   Lore skill associated with a settlement of your choice, and the Lightning Reflexes feat.

The feats herein include three 1st-level feats, all of which require one action and, no surprise, being trained in Athletics. Choke requires that you have a creature grabbed, and requires beating Fortitude DC of the target with Athletics. On a success, the target can’t breathe or use auditory actions that rely on speech for 1 round; the target needs to hold their breath; a critical success nets a higher round reduction and adds an immediate Fort save if the target is suffocating. A critical failure nets a free Escape attempt. This is, theme-wise, something I am very much fond of, as it can help run infiltrations/espionage scenarios. Two thumbs up! And yes, the 1 round timer is a bit odd, but if you have ever been choked (I have), you know that you won’t immediately scream for help, so that also makes sense on a meta-level.

The second 1st-level feat realizes the classic bind weapon trick with Pin Weapon: Athletics opposed by Reflex DC, and on a success you impose a -2 circumstance penalty to attack rolls with the weapon, while the critical success adds being grabbed. Both this feat and the third one, Sunder, have the Attack trait and only work versus targets that are no more than 1 size category larger than you are. Sunder does pretty much what it says on the tin. The feat has synergy with Titan Wrestler, and the critical success nets the expected partial hardness ignoring.

The pdf offers three 2nd-level feats: Quick Grab requires being an expert in Athletics and can be used once per round: Grab an Edge as a free action; unless legendary in Athletics, the Athletics DC is 10 + incline’s climb DC, which seems steep. If you fail to Grab an Edge with the feat, you get your regular attempt as a reaction, if have yours. The interesting thing here would be that master makes you no longer require a free hand, and legendary lets you use it twice per round, and lets you use both after each other. I get why this does not have the free action icon, but it imho would have made sense. Anyhow; Destructive Smash requires wielding an improvised weapon, or have a creature grabbed. You can Strike with an improvised weapon or a grabbed creature, dealing unarmed damage. Neat: The feat does mention that, e.g., striking with mutant porcupines or other weird creatures can deal damage other than bludgeoning, and the weapon or creature you use for attacks takes half damage. This is pretty cool indeed! I’m not sure I like that this requires two actions, though. I get the damage/balance rationale, but I’d decrease action required at a higher skill proficiency.

Climber’s Save lets you use Athletics to Grab an Edge instead of Reflex saves. Makes sense.

The pdf also provides three 7th-level skill feats: For one action, we have Break Free, which does what it says on the tin. Unless I’m missing something, there is a small paragraph of pre-development text left in the success-section: The last paragraph, namely: “You get free and remove the grabbed, immobilized, and restrained conditions imposed by your chosen target. You Strike the object or hazard imposing the condition or conditions upon you.” Is redundant and slightly less precise than the previous text. The good news would be that this only represents a minor hiccup, and it does not compromise the functionality of the feat in any way; it’s just slightly disorienting on a first read.

Leaping Start is a free action and is triggered by the last action being a Leap or an action for which Leap is a subordinate action, and its requirement is a bit weird: “You are adjacent to an include at the end of any movement allowed by your Leap.” Pretty sure we have an autocorrect glitch here: That should be “incline”, not “include”. This minor snafu notwithstanding, its nice to be able to climb/scramble across the incline; this is one of the few rules options I’m aware of that does a solid job representing momentum in a meaningful manner. Stair Master lets you ignore difficult terrain of 45° or less inclines; Striding down these inclines makes you faster and climbing an incline between 90° and 45° improves your success category. Nice.

Finally, we have 1 15th-level feat: Wall Walk (1 action) has the Move trait and requires Quick Climb or a climb speed; it grants you a wall walking speed equal to the lower between regular and climb speed; the action lets you move across ground, up or down inclines and vertical surfaces up to your wall walk speed. Unless you can climb without one or both of your hands, you need free hand(s). This also can be used as a subordinate action that lists Stride or Climb instead.

Editing and formatting is very good on a rules-language level; on a formal level, we have some minor snafus, though these do not hamper the functionality of the pdf. Layout adheres to the series’ two-column full-color standard, and the pdf sports a nice piece of full-color artwork. The pdf has no bookmarks, but needs none at this length.

Dustin Knight’s Athletics feats are well-worth getting; there are some genuinely cool options here, and the rather conservative power-level also means that, regardless of the game you’re playing, these should not present any issues. Increasing their potency is also, as a whole, pretty simple, if desired. Important to me would be that some of these feats genuinely provide some new tricks, though I admittedly would have enjoyed some of those options to be further expanded upon…though that tends to be a good sign.

Anyhow, the pdf does have a few cosmetic hiccups, which prevent me from rounding up, but considering they very low price point, this is certainly worth getting. My final verdict will be 4.5 stars, rounded down.

If you enjoyed this review, please leave a tip via paypal, or consider joining my patreon. Thank you!