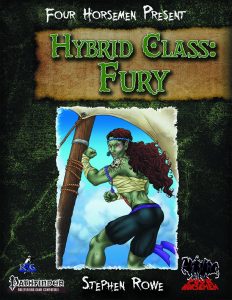 This base class clocks in at 12 pages, 1 page front cover, 1 page editorial, 1 page SRD, leaving us with 9 pages of content, so let’s take a look!

The fury as presented herein is a barbarian/monk-hybrid and gets d8 HD, 3/4 BAB-progression, good Fort- and Will-save progression, 4+Int skills per level, proficiency with simple and martial weapons, but not with any armor or shield. At 3rd level, the fury gets fast movement + 10 ft., which increases by +10 ft. again at 6th level and every 3 levels thereafter. Similarly, the fury gains an AC-bonus while unarmored and unencumbered based on Cha-mod, with 4th level and every 4 levels thereafter increasing the bonus thus granted by +1.

A fury receives focused rage at 1st level governed by Cha – 4 + Cha-mod rounds per level, +2 rounds per class level. Temporary increases to Charisma do not increase focused rage. While in such a rage, furies gain +2 to Strength and Constitution as well as a +2 bonus to Will-save. Additionally, while in such a rage, they can perform basically flurry-based additional attacks, at the cost of a -2 penalty to all attacks – the impressive component here would be the fact that both TWFing and attack-dispersion between attacks in the focused rage is accounted for. More impressive, even, considering that the focused rage has full BAB for these attacks and yes, the fury takes a -2 penalty to AC. Similarly, the ability manages to get the Str-score limitations of off-hand attacks right and, while in focused rage, the fury may not use Cha-, Dex- or Int-based skills – excluding Acrobatics, Fly, Intimidate and Ride. Furies are fatigued post rage for 2 rounds per round spent in focused rage and thankfully, the class feature comes with a handy list of focused rage attacks in a separate table, making the class here pretty user-friendly.

Speaking of user-friendly – base unarmed damage for Small, Medium and Large characters similarly gets its own little table, with particularly the nod towards Large characters being nice. And yes, damage increases parallel to the monk. 2nd level provides uncanny dodge and takes into account when a multiclass character already has the class feature. Which is as good a point as any to mention that rage powers and interaction with barbarian class levels and rage are covered – so no, these are not mutually exclusive per se. Rage powers are gained at 2nd level and every 2 levels thereafter. 3rd level provides maneuver training and 4th nets the class the ki pool – which is based on 1/2 class level + Cha-mod, with ki strikes scaling from magic at 4th to adamantine at 16th level. Interesting and perhaps one of the core cool abilities here: The fury may elect to take 2 points of Cha-damage which can only be healed naturally to end the fatigued condition, allowing for potentially quicker rage-cycling. (13th level can similarly get rid of exhaustion.)

7th level provides DR, +1 every 6 levels thereafter. Here’s an interesting mechanic – the fury may also take hit point damage equal to class level instead of using a daily round of rage of point of ki…but said damage can only be healed naturally, effectively reducing the maximum hit points of the character. This allows for significant control over the resources…but also imposes the toll of a swift action as activation…and makes the fury potentially ever more fragile and thus should be well-contemplated. Mid-dungeon, burning through resources like this can result in some nasty rest required… 9th level provides improved uncanny dodge, again, with multiclass info.

11th level upgrades the benefits of focused rage to +4 and Will-save to +3 while also increasing the attacks, with 20th level providing +6/+4 and another upgrade, respectively. 15th level provides a brutal throat strike attack that makes the target potentially suffocate. 17th level provides a Diehard-granted option with ki pool-synergy. At 19th level, the fury can take negative levels as a swift action to double bonuses – and indeed, the class allows the fury to maintain the power of this ability by incurring cumulative negative levels – and yes, the ability cannot be cheesed via immunity to negative energy/level drain, etc. and cannot be magically removed.

The fury gets archetypes as well – The maimed gets a disfigurement instead of the 6th, 12th and 18th-level rage power – these basically would be 5 different micro-curses: Psychically broken characters are immune to morale bonuses or penalties, with immunities to confused conditions at 6th level, 12th level at charm spells and effects and 18th level, providing immunity to fear. Maimed furies have a clouded vision, but gain ever increasing senses. Enslaved characters have some penalized ability scores, but get ever increasing options to escape grapples and shackles etc. You get the idea.

The second archetype would be the revenant, who does not gain additional attacks from focused rage, but may suppress bleed and sleep and also gains immunity to death from massive damage. The archetype also gains morale bonuses to saves versus death, disease, poison, ability damage/drain, energy drain, paralysis and stunning. Here’s the interesting component, though – at 5th level, the revenant may cause Cha-damage with a touch attack while in focused rage – if successful and the target fails to beat the scaling save, the fury will not have to deal with fatigue after the focused rage – basically, instead of burning your own body, a revenant focuses on dealing this type of drain. When a creature is killed with such a strike by the revenant, he may regain 1 ki, which would be very problematic…but basically, due to action-economy, it amounts to exchanging rage for ki, which also means that the kitten-ing of the ability can’t really be used in any efficient manner. The interesting component here – the high-level abilities of the archetype can deal significantly more Cha-damage and even drain…but at the cost of significant amounts of ki. I really like this archetype’s fluid resource management.

The final archetype would be the vengeful, who gets bonuses to atk and damage versus creatures that hit her, with the threshold ever increasing and the bonus scaling as well. Instead of fast movement, these characters gain a sworn enemy chosen from ranger favored enemies. The interesting component of this archetype is that they may expend 2 points of ki – to gain +Cha-mod to atk and damage and ignore all DR of the target…which is not something I am fond of. A fluid scaling of DR ignored, with more powerful DRs being unlocked at later levels would have probably been appropriate. 9th level provides a final retributive strike before going down.

Editing and formatting are top-notch, I noticed no issues apart from ki not always being italicized, but ultimately, I never really got the reason why it was treated differently in some publications from talents et al in that regard, so yeah. Layout adheres to Rogue Genius Games’ 2-column full-color standard for the series and the pdf features a mix of b/w and full-color artwork – generally solid. The pdf comes fully bookmarked for your convenience.

Stephen Rowe’s Fury was a class I did not look forward to tackling – after all, I already had a damn cool monk/barbarian-hybrid, namely Forest Guardian Press’ Savage. The most astounding component here would certainly be the fact that the two classes are radically different from one another. The fury can be basically summed up as “sudden death mode, the class” – you can deliver some brutal damage, yes, but at the cost of increasing vulnerability. And more importantly, the class actually uses a complex resource-management as an ingrained component of its design that renders the playing experience rather interesting. The fury, as a stand-alone, is pretty awesome, with only the vengeful feeling like an afterthought that falls short of the other two damn cool archetypes. That being said, this class does require some GM-oversight: Since it makes hit points a balancing factor and at the same time delimits ki as a limited resource, it can be cheesed via multiclassing and option-combinations, in harder ways the more ki-based options your game has.

Thus, I can’t unanimously recommend the class for all tables; what I *can* do, however, is say that the class as such makes sense and, on its own, as a closed system, works rather well. Hence, I’m going to rate this one 4.5 stars, rounded up to 5 for the purpose of this platform, though with the express recommendation to GMs to limit the multiclassing capabilities of furies and their access to all those nifty ki-based options out there. Don’t say I didn’t warn you if you forego this precaution!