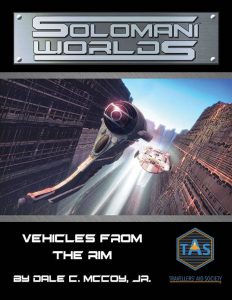 This supplement clocks in at 31 pages, 1 page front cover, 1 page editorial, 1 page ToC, 2 pages of advertisement, 1 page back cover, leaving us with 25 pages of content, so let’s take a look!

So, now that Traveller 2e has come around, Jon Brazer Enterprises took a bold step, creating the first supplement not situated in the Foreven Worlds sector; this does not mean that the Foreven Sector support’s been canceled, mind you – but it’s a nice way of diversification within the Traveller game. All of this is explained within the introduction, and the book is framed in a way that features a new customization option for studios on the final page, which also includes a handy index.

Now, this book contains, no surprise there, vehicles, but it deserves some kudos for how it does that and how it organizes its content: Each vehicle type fits neatly on one page, with the stats at the top, followed by equipment/traits, and then, if relevant, environmental variants alongside modified costs and equipment/trait changes if relevant. Flavorful descriptions complement the vehicles. If there is sufficient space left on the page we also get an artwork (a few b/w, others full color and CGI-ish). Additionally, the vehicles are organized by TL, not alphabetical, which makes more sense to me from a utility standpoint. Kudos! It should be noted that this is also represented in the bookmarks-organization, which means that this book excels in the utility sector, big time. Actual use at the table is really smooth.

Okay, so, let’s talk about the respective vehicles! For TL 8, we have the rotary autonomous deliverer (Aka RAD), a pilot-less cargo-delivery system that comes with variants for corrosive, hostile and insidious environments. The second TL 8 vehicle would be the Stock Ground Car Racer, employed by the SCAGRI (Stock Car Association of Ground Racing). What’s that? Well, think of a ridiculously upgraded version of NASCAR, but each racer also adopts a public persona, somewhat akin to wrestling’s kayfabe. Statwise, these have a fast (high) speed and a range of 800 (1,200) and an impressive 9 Hull for such a small vehicle. I’d certainly watch that sport, and the vehicle actually made me come up with cool adventure and character ideas…so yeah, big plus.

At TL 9, we have the book’s first military vehicle, the J-235B Trifighter, armed with 2 light autocannons, classified as something closer to a wavesled than a waverider; it also reminded me of the crafts of certain rebels against a dark empire in a galaxy far, far away. Terrascouts have a massive 50 K communications range and solid sensors as well as Recon DMs, making them good recon vehicles for planets inimical to human life.

While we’re on that: In TL 11, we have the Instartech AV-8BC Prospector is also a vehicle designed for staying on hostile planets, but it’s not a scout, it’s a workhorse: It can hold a crew of 4 for a week sans food or atmosphere resupply before having to return to base, but in contrast to the scouts, the communications only have a 500 km range, and the prospector’s mining equipment (digger blade + manipulator arm) can be used in defense, if required. The recycling and refuse hauler once more comes with environmental variants, but also features a version specialized for vacuum, and is one of the vehicles that I very much enjoy seeing in scifi, because it adds that level of realism…and because I‘m sometimes a bit of a soft-hearted tree-hugging hippie who very much want to think that humanity in the future wouldn’t litter. 😉

TL 12 has a massive 5 vehicles: On the utility side of things, the AN-72 construction mech comes with loadouts for various environments, including vacuum, and in a nice piece of flavor, it’s not just used in construction anymore, but also in Mechball! Really cool allusion to a cult classic there, and not on the nose either! The Eagle 5 recreational vehicle promises a fun experience for the whole family, including mini-kitchen and vacuum protection; the skill level 3 autopilot and +2 Navigation DM also make sense. And Armour 4 everywhere? Makes sense. At the same armour, we have the Ginstar 385 family grav car, also known lovingly by its moniker “Pete”, and as a grav flyer, it actually also has some massive storage space in trunk and frunk.

Continental gravjets are another vehicle that just makes sense to me, and with variants for cargo, vacuum, and vacuum cargo, these’ll are sure to feature in games. 1,000 km range communications also make them good places to run adventures in. Forget snakes on a plane! Think of weird extraterrestrial things on the gravjet! Not enough? Want to amp up the stakes? Jumbo gravjets, once more in aforementioned 3 variants let you amp up the scale further! As an aside: I really like how cargo/passenger space are handled in these: The cargo variants obviously have less passengers, but massive cargo holding capacity.

Oh, and guess what? This pdf has stats for the K.N.I.G.H.T. Rider, for the discerning customer whose life is in serious danger. 16 Armour, on-board life support, electronic decoy, stealth mode, smart wheels. Damn, this made a kid in me ridiculously happy. Oh, and the SFS-56 Quadwing interceptor, kinda akin to X-wings, with gauss cannons. Oh, and in case you were wondering, their nickname is “DIE”, which obviously stands for Dual Iconic Engines. Obviously. You know. 😉 EDIT: Minor bookmark hiccup rectified! That’s awesome to see!

For TL 13, we have 6 vehicles: On the utility side of things, there would be the PNG Motors G118 G/Bus, essentially a shuttle bus for ferrying travels to planetary and orbital destinations in style and comfort. Want more comfort? With the House G/Yacht, the rich and famous can get a smooth vehicle with hot tub., holosuite, wet bar, etc. – all for the low, low price of slightly over 31 million credits…
Rather funny: The Chandria gravitic DB-32 news skiff has the farthest communications range of any vehicle in the book, with 100K km, and comes with an armored variant for use in dangerous regions. With long term life support, advanced stealth capabilities and advanced electronic countermeasures, these are focused tightly on what they should do…and gave me some neat ideas for adventures.

At this TL, we also have 3 military vehicles: For airborne combat, we have the P.173 transatmospheric flyer, equipped with plasma missile racks and gauss cannon, and actually has a function closer akin to a bomber than a regular flyer, but without sacrificing much in the vein of mobility. Beyond that, we also have two walkers, the first of which would be the dual gun battle walker, which sports two plasma gun-Cs, and with prismatic aerosoal dischargers, decoy dispensers, etc., they are actually a kind of urban legend: No holo-capture of them exists, so some do think they are still in the concept phase…or, well, this might also be due to the advanced stealth and camouflage capabilities…you decide. Definitely existing: the Voidspace Goliath battle mech, equipped with a fusion gun-x, 2 rocket pods and a Vulcan machine gun, these are the classic walkers with a crew of two and brutal capacity to deal out punishment. Need a lethal mech boss? There you go!

EDIT: A minor hiccup in the bookmarks has been rectified! Excellent customer service! Where there is a NASCAR equivalent, we obviously also have a formula equivalent, right? Right! With ridiculous hypersonic speeds (cruise speed of “only” supersonic), these things are fast and have a 10k km communications range, and obviously, this is a highly-lethal sport, so these racers focus on more picturesque environments. The second TL 14 vehicle would be the medium autonomous cargo hauler, which works sans crew, and comes with the usual environmental variants as well as in a version equipped to haul life cargo in short term, at the cost of half a ton of cargo space. Also, you know, the acronym for them is the MACH truck. That got a bonafide chuckle out of me.

Last, but certainly not least, we have the TL 15 Terran hypercycle G/bike. Open design, supersonic speed, these super-smooth vehicles are particularly enjoyed by law enforcement, and, it being Imperium tech, some loyal citizens are also allowed purchasing them…but this loyalty condition obviously also marks the owner as a target for anti-Imperium groups and extremists.

Editing and formatting are very good, I noticed no snafus on a formal or rules-language level. Layout adheres to an efficient 2-column standard in b/w, with the full-color CGI-artwork as color-nuances. The pdf comes fully bookmarked with nested bookmarks. EDIT: A minor hiccup in the bookmarks has been fixed! 😀

Dale C. McCoy, Jr. delivers big time in this collection of vehicles: Inspired and interesting, these vehicles help flesh out culture and how things operate in the game, adding a sense of plausibility to aspects of life that I very much adored seeing. While the pdf does feature pop culture references here and there, they are actually executed gracefully and with enough skill to render them a welcome addition that can be just ignored or glossed over, if you choose to. That’s actually difficult, mind you, and helps make the pdf more timeless, and also makes it not simply a cultural snapshot.

All in all, I really, really enjoyed this pdf. It is executed skillfully and stylishly, and did inspire me. As such, this gets 5 star + my seal of approval.

If you enjoyed this review, please consider leaving a donation via Paypal, or by joining my patreon!