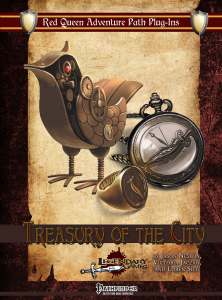 On the first pages, we have a list of all the items featured within this pdf, listed by price for your convenience, but before we dive into the specifics, let’s start with the new special weapon properties featured within. There are two ones that have a +1 equivalent, the first of which would be deceptive. This one adds twice the weapons enhancement bonus to Stealth and Sleight of Hand checks to keep it hidden from prying eyes, and similarly, the bonus is added to the DC of Diplomacy or Heal checks made to gather information about it – big kudos for taking that investigative aspect into account. Additionally, when striking a flat-footed or unaware target, a glamour is implanted that scrambles divinations pertaining the attack, serving as a misdirection, save that the wielder gets to decide the false information. This is genius. I mean it. This weapon quality alone may be worth getting the pdf for. This provides so many truly evocative and complex investigation angles, I can’t even begin to list them all. Easily one of my favorite special abilities for a weapon ever.

Partisan weapons are attuned to a city, nation, etc., and if the wielder is a member of this group, she receives a +4 insight bonus to Bluff, Disguise and Sleight of Hand to conceal it from members of other nations, cities, etc. On a critical hit versus a flat-footed humanoid member of another nation, that target must succeed a Will save or be shaken for 1 minute. The wielder also receives a +2 bonus to confirm critical hits versus other such members of different nations. The attuned nation, city state, etc. must be determined upon creation. Another winner in my book! The third one would be a +2 special ability, namely treasonous, which is basically the upgraded version of partisan, increasing its enhancement bonus by +2 versus members of other nations and +1d6 damage, which is not multiplied on a critical hit. It also makes the Sense Motive DC to determine lying etc. harder. Okay these latter two are amazing once you think about it – what they mean for nations and how they work, how that can influence the game – impressive indeed.

Beyond these, we also 4 armors and one specific shield. The first armor would be the crypt warden’s plate, which prevents the wearer from being raised from the dead; it’s also deathless and shows the difference between good and bad item design: In another book, the armor would just detect undead by some means. Here, however, the armor actually describes *how* it reacts to nearby undead – cold, glow, etc. – this adds a tangible sense of the magical here. The lavishly-illustrated hauberk-in-motley is so light, it does not penalize Acrobatics with the armor check penalty. Additionally, as a standard action, the wearer may make a Perform (comedy) check to fascinate nearby targets if they fail their save. A hex-caveat prevents abuse, and the armor provides synergy with the fascinate bardic performance for hideous laughter 3/day, and characters skilled in Perform (comedy) can allow for the increase of the save DCs. Quickchange studded leather is amazing: It can be donned quickly and may be loosened as part of making an Escape Artist check. Love this one! The scale of endless bureaucracy has 25 scales that may be removed, transforming into sheets of paper. 10 of these may be used to create perfect copies of nonmagical text. There also are scales that can transcribe spoken words. The transcribed request can then be forced upon recipients, compelling them to fulfill the requests. The final scales allow for the creation of compelling forgeries and the wearer’s skills pertaining law etc. are greatly enhanced. An utterly inspired armor here, one that feels truly evocative. The shield I noted would be the roofrunner’s buckler, which may be placed on the ground. A creature that’s not too heavy may place it on the ground and have it levitate short distances. Really cool!

The pdf also includes three specific weapons: The captive blade can be used freely while entangled or grappled, and is particularly potent when wielded against restraints, manacles, etc. The forgetful sap can add memory lapse to attacks, with a save to negate. The DC is higher for unaware targets. Creatures not armored too well can also be touch attack memory lapse’d. Thirdly, the nightwatch crossbow has a darkvision glass scope and may 1/day fire a daylight bolt. Cool.

The pdf contains 4 different rings: The diplomat’s signet is a low cost skill boost stacking with the other two diplomat’s items. These are wondrous items that also enhance diplomacy and net different Knowledge boosts. While I like sets, this one is, compared to the other items herein, not particularly interesting and doesn’t net anything unique beyond stacking bonuses.

The ring of erudite alacrity consists of 3 rings, and spinning the gold band lets you perfectly memorize one area or up to 1000 words of text, for 24 hours. This is perfectly codified. The platinum band allows for quicker spell research, magical crafting and locating written information – and yes, the item does take losing and retaking the item into account regarding total duration calculation! The final band provides a short-term initiative, Ref-save and AC-boost. Ring of the treacherous advisor mirrors the alignment of casters attempting to discern the wearer’s alignment; the second ability allows the wearer to lie even in magical zones. The scabbard ring can hold a weapon in tattoo form on the forearm of the wearer.

The pdf also contains a new rod, the heartstone rod, which nets blindsense – by virtue of hearing creature heartbeats! It also can affect targets with the curse of the tell-tale heart, making targets that lie or attempt to stretch the truth suffer from racing heartbeats and become both fatigued and shaken. So cool! The wondrous items with include the bracelets of freedom and are super tough to notice, netting the wearer a massive +20 bonus to hide them from inspection. These enhance Escape Artist, and, as a swift action, all but guarantee escape from manacles and similar restraints, making is a great item when attempting an extraction of a target of an infiltration under the guide of having been caught. The bracers also allow you to make inspection seem like you’re still restrained. Cool one! Candles of the sacrament blesses those nearby and may affect evil targets nearby with bane. Okay one, I guess. Chain caltrops are magical, cause bleeding damage, entangle like tanglefoot bags and are reusable. For 600 gp, certainly worth getting! Cool one!

The pdf also includes two stylish pieces of headwear – the cheater’s hat makes the target super lucky in games of chance, with suitable rules-representations of the effects and some nice storytelling potential. As an item for the crooked, the pilferer’s gloves complement it and have a built-in set of masterwork thieves’ tools and, beyond enhancing Sleight of Hand and Stealth used to steal or the steal maneuver, it also alerts the wielder of magical alarms and the like and may be used to dispel such effects. During Disable Device checks, the gloves can also shroud the wearer in silence. With the threefold knocker glove, you may knock on a door and emerge from another unlocked door within the same building or 100 ft. With three knocks, you can even bring allies with you. Love it! And if someone catches you – well, there’s always the toxic scabbard for light weapons, which can bypass detection and becomes even more useful for those with the poison use ability.

The second hat would be the detective’s cap, which enhances Perception and Sense Motive and allows for tracking In cities via Knowledge (local) – fun twist there! If you’re wearing that cap, you may also be interested in the mark of the authority, a badge that enhances your own CMB and that of nearby allies with a couple of fitting 1/day spells. With the inspector’s bullhorn you WILL be hear – it basically acts as a megaphone. It helps to Intimidate those in the cone, and the horn enhances the DC of sonic-based effects channeled through it. It also can 3/day greater command/greater forbid action, as chosen. The horn also allows the user to demand that targets show themselves, negating invisibility, blink and similar effects. If already visible, the affected targets must move towards the user. Damn useful!!

The beautifully-illustrated clockwork spotter is an intricate clockwork birdy that, upon activation, becomes a clockwork raven that can locate creatures and objects and help find the path. Really neat!

The cloak of the drifter helps generalize the wearer and disguise as nonspecific targets and helps blend in crowds. Nice one! Glassee gloves tightly codify making items transparent. The senator’s stole helps with social skills and allows the wearer to instruct targets with know peerage and it enhances language-dependent effects and fortifies the wearer versus charm and dominate while enhancing the wearer’s harmless charms, making them harder to dispel. At, ironically, twice the price of the stole, the ratty robes enhance Sleight of Hand and fortifies the wearer against poisons and diseases. The robe also prevents rats and rat swarms from attacking the wearer, and allows the wearer to turn into a rat swarm once per day. Even cooler: this may be used as a reactive dispersal to mitigate the worst brunt of assaults. The third such equipment would be the gorgeously-illustrated sewer suit, which acts as either a +1 leather armor or in conjunction with it, as a garment. The hood filters filth and helps versus disease and nausea and swarms. It also helps you hold your breath and allows for quicker movement through bogs etc. Cool! Finally, there would be portable waterworks, buckets that can turn into wells or fountains!

Editing and formatting are top-notch on both a formal and rules-language level. Layout adheres to a 2-column full-color standard that crams a lot of information on every page, and the pdf sports some really cool, new original artworks in full color. The pdf comes with detailed, nested bookmarks, making navigation comfortable and smooth.

Jason Nelson, Victoria Jaczko and Loren Sieg show how it’s done. As befitting the names of two of these designers (Victoria meaning triumphant, Sieg being German for victory), this collection of items represents a triumphant victory: While the diplomat’s set is somewhat lame, that’s the only item herein that is not amazing: Even when the items are very much spell-based, they offer unique flavor, cool tweaks, and make them feel distinct. The items here are a godsend for a wide variety of campaigns, making this transcend its intended use as a Curse of the Crimson Throne plug-in. The items within this pdf are a boon for GMs struggling with making investigations or heists; any low-magic campaign will adore these; if you even remotely are interesting in espionage or heist scenarios, then this is pretty much a must-have offering. This humble pdf strings inspired items back to back, and it does so in a truly inspired manner – quality over quantity, this delivers in spades and is worth every cent. Get it! My final verdict will clock in at 5 stars + seal of approval.

You can get these inspiring items here on OBS!