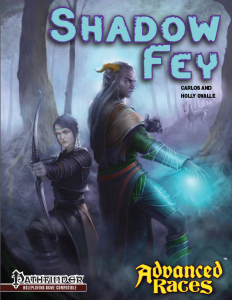 This installment of the advanced races-series clocks in at 19 pages, 1 page front cover, 1 page editorial/ToC, 1 page SRD and 1 page advertisement, leaving us with 15 pages of content, so let’s take a look!

So…shadow fey. I was not pleasantly surprised to see this book hit shelves, mainly due to *LOVING* shadow fey to death. “Courts of the Shadow Fey” is one of my favorite adventures…ever. And we all remember what a certain good drow ranger did to the beloved and fierce dark elves. So let’s take a look and see whether this book offering shadow fey as a player-race ruins their appeal or manages to maintain it!

First of all, the write-up surprised me with one particularly smart decision – emphasizing the variety among shadow fey, thus denoting that they do not form a uniform species. Secondly, their mindset is pretty well explained, thus rendering actually portraying them as PCs easier. Oh, and quoting La Belle Dame Sans Merci? NICE!

The scáthesidhe receive +2 Dex and Cha, -2 Con, are of the fey type, light sensitive, receive +2 to stealth and always treat stealth and bluff as a class skill, can cast shadow jump as a spell-like ability once per day and reduce the penalties incurred for movement by 5 and for sniping by 10, making them born ambushers. If using the status-rules from the Midgard CS (nice to *finally* see these get some love!), they receive +2 status, more or less if belonging to a certain class. Very cool! There also are small shadow fey with a base movement rate of 20 ft. that also receive 1/day vanish as a spell-like ability.

We also receive FCOs for Battle Scion, Magus, Shadowsworn, Sorc, Summoner (with a minor typo – the “/” of DR in the wrong place) and the Theurge – nice to see some love for these KP-classes!

Now the comprehensive introduction to the Winter and Summer Courts and the very iconic factions thereof constitute another neat piece of fluff – particularly delving into the shadow fey’s elitism and status-obsession making for nice, informative reading material. The take of the shadow fey on both Paizo and Kobold Press-classes is nice to see as well.

Now the copious traits delivered deserve special mention as well – first of all, they properly specify their trait-bonus-type, something many traits forget. Secondly, some of them are just damn cool – from ignoring status penalty to better moonlight tracking, they can be considered well-crafted and generally balanced.

A total of 11 feats are provided, some of which make use of status-mechanics, which is neat to see. Alas, not all feats can be considered well-crafted – Concealed Shot, which allows you to execute a surprise attack with a hand crossbow, while flavorful, utilizes an annoying per-encounter mechanic. Yeah, by now you know the rant by hard. Per-encounter abilities make no sense whatsoever. Next. Gaining DR 2/Cold iron (upgradeable to 5) is pretty cool and balanced via getting sickened on contact – NO SAVE. Now, while generally, I consider feats like Flicker boring (+1 to AC – yawn!), at least the bonus as racial is pretty uncommon – and it allows 9th level shadow fey to gain access to hide in plain sight via a follow-up feat, so that’s a cool synergy. Full movement while using stealth for 7th+ level shadow fey is also part of the deal.

We also receive the new Order of the Swan for cavaliers to represent the rakish fey knights, a new familiar option, 3 shadowsworn talents (all of which are solid – mirror image, blinding and PINNING A SHADOW TO THE GROUND – nice, the authors know their mythology or have read the superb Van Richten’s Guide to the Shadow Fey of Ravenloft, unrelated to KP’s Shadow Fey…)

Wild-blooded sorcerors can take the shadow fey bloodline – which is solid. The Dread Hunter cavalier receives a powerful mount that advances as a cohort and utilizes stealth synergy with the mount – pretty cool. However, with potentially a shadavar or nightmare mount at level one, the archetype throws any semblance of balance out the window. It should also be noted that Dread Rider, which nets 1/2 level bonus to intimidate while mounted should probably specify it refers to CLASS levels; Additionally, the hunter may emit a debuff scream – which is nice, but the ability should probably be a language-dependent mind-affecting effect. The capstone upgrades the scream to confusion -per se a conceptually nice archetype with some minor flaws in the execution – and in need of a nerf-bat beating for the mount at low levels – otherwise the nightmare outclasses half the adventuring group and anyone who’s seen a cavalier with a horse (which is NOT intelligent and needs to be commanded via tricks!) can get a good idea why this needs nerfing. The second archetype is the twilight envoy for the shadowsworn, who receives bardic spellcasting, trapfinding and access to the last-second save “Walking the Shadow Roads”-incantation – generally a cool variant on the shadowsworn.

We also receive 5 new spells, with 3 being chimeric transpositions that allow you to exchange special monster abilities and senses – weird, disturbing, cool. Black Swan Storm conjures forth a deadly storm of black feathers…and is pretty strong. As a 3rd level spell, it deals 1d8 per CL (max 10d8) and also decreases the illumination level around the target, granting concealment to the immediate vicinity – rather interesting and since it only affects one creature, nice. Shadow Jump, in case you’re not familiar with it, represents low-level, short-distance shadow to shadow teleportation.

Beyond that, arrows that cause bleeding damage, balance-enhancing feather cloaks and shrouds for shadow fey prisoners make for cool items.

We also receive new creatures . the Razor Swan (with breath attack, sharp wings and a swan song – cool!), teh shadavar mounts and the owl-like stryx – which have human teeth in their beaks. Alas, I noticed some minor glitches in the statblocks. E.g. the razor swan’s attack should be +6, not +5 (+3 magical beast, + 3 dex via weapon finesse) etc. nothing game-breaking, but still, slightly annoying.

Editing and formatting are pretty good: On a formal level, excellent, on a rules-level there are some minor glitches. Layout adheres to Kobold Press’ two-column full-color standard and the pdf comes fully bookmarked for your convenience. The original artwork is neat.

Author-duo Carlos and Holly Ovalle have crafted an installment of the Advanced Races-series that made me groan when I saw it at first, only to have my negative bias dissolved for the most part. Power-level wise on a solid level akin to the plane-touched races, the shadow fey will not break a game. They manage to maintain their glorious fluff and thankfully, the authors *get* what makes them cool and enigmatic. Now while personally, I prefer the race as a DM-only race, the crunch provided herein, the information for players – all of that is pretty solid and makes playing these guys work well in the context of an adventuring group. Now that is quite a feat in my book! In fact, I was truly excited to see this level of detail and coolness, interesting rules-ideas etc. – this ranks as one of the strongest Advanced Races-installments. That being said, the supplement does sport some minor glitches and the cavalier archetype is in serious need of some nerfing to prevent the mount from being an utter show-stealer at low levels. Still, this constitutes a solid installment and hence, my final verdict will clock in at 3.5 stars, rounded up to 4 due to these shadow fey not deserving a 3-star rating – the pdf is simply too inspired for that.

You can get this neat installments of the series here on OBS and here on d20pfsrd.com’s shop.