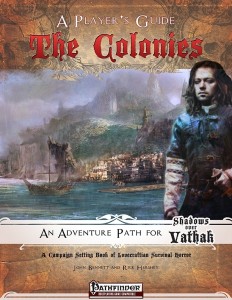 This massive player’s guide clocks in at 34 pages, 1 page front cover, 1 page editorial, 1 page ToC, 1 page SRD, 1 page back cover, leaving us with a massive 29 pages of content, so let’s take a look!

Withered parchment, with half-concealed pencil drawings in the back, a small splotch of blood at the bottom right corner of the page – there’s a reason layout designer and artist Rick Hershey is as prolific and well-regarded as he is. From the very get-go, you’ll realize one thing – this book is beautiful. I own all Ravenloft supplements ever released and have a vast collection of horror-themed books beyond that. This ranks among the most beautiful – but that’s one factor Fat Goblin Games always managed to pull off, so let’s see whether taking John Bennett on board has helped the writing and crunch to keep a consistent quality – the intro-narrative on the parchments does make one hope for the best.

The very first thing you’ll notice, would be emphasizing the peculiarities of the Vathak campaign setting and acknowledging a basic issue of the campaign setting – in its diversity, it, at least in my book, stretched itself too conceptually thin. Let me elaborate – Vathak can be seen as a kind of ravenloftish world meets colonialism meets full-blown warfare against the Old Ones. The lands have been conquered and colonized by foreigners following the pr se benevolent One True God (who suffers from a majority of corruption among the followers); before this backdrop of vanquished vampire lords, the warfare against the Old Ones is a pretty open secret in the world of Vathak, making it quite grim. Now this player guide acknowledges the potential disparity of playstyles, from psychological horror to full blown horror hack-‘n’-slash and takes note, advocating communication – moreover, it de-emphasizes a black and white ideology thoroughly unsuited for horror gameplay and emphasizes shades of gray morality. Moreover, the pdf provides questions to guide players to flesh out their characters with regards to the colonies as a region and their mindset, providing a first, immersing guideline that does help make the setting feel much more concise.

Now, like any *good* player’s guide, this one does sport several short entries of local towns and forests, all with legends and the like, without spoiling the truth behind the tantalizing and often rather unsettling tales. John Bennett’s experience also shines through by providing a staple from Raging Swan Press – whispers and rumors of the respective environments, which can either be considered adventure hooks or just local color for the PCs to use to provide some in-game pertaining knowledge – nice.

We also receive traits that range from slight damage bonuses to easier stabilization, belief in elder gods, a remnant of necromantic bloodline that nets temporary hit points per cast to a scholarly (or rich) relative you can contact for money or to do your research for you – the traits succeed in one way: They are, unlike many traits, NOT boring. However, at the same time, their editing is not that tight – while universally conceptually cool, they have some minor (and I mean minor) issues – aforementioned necromantic bloodline grants you 1 temporary hit point whenever you cast a necromantic spell, unfortunately extending to the infinitely available cantrips. Will this break your game? No. But it’s slightly less elegant that I like it to be. More annoying is the fact that not a single trait specifies its bonus type – it’s supposed to be a trait bonus, every time, not just a “+1″or a “+1 bonus.” This does not break the section, but it’s an easily avoidable issue that may come around at later levels to bite one in the behind.

We also receive 9 new feats. The feats here range from mechanically interesting to dull/problematic – I generally like the idea to quick draw light weapons for a +4 shield bonus; Alas, the feat does not specify what action it takes, only that it’s “Once per round” – this should probably be an immediate action. Then again, executing an AoO to a target who has attacked and missed you after you activating this defense makes for a nice parry-mechanic. Would you take a feat for +1 to atk, damage and survival versus lycanthropes and skinchangers? No? Boring? Yeah, I think so too. I mentioned “slightly problematic” before – adding a second attribute modifier to a skill can imho always be gamed, especially at lower levels, and +int-mod to BLUFF becomes somewhat problematic at lower levels; Remember, bluff also governs feint! This probably is not the intent of the feat, but the lack of closer restriction renders this use possible. Not a fan. A feat that allows you to gain a kind of information network for gather information via diplomacy would be pretty useful, especially in the context of Vathak. Staggering channel is imho broken, depending on the amount of undead you intend to use + channel dice rounds stagger for +2 channel energy uses is a pretty nasty save or suck for undead. Adding bleed damage to spells via metamagic is pretty cool, though the feat’s wording could use a slight polish – ” Whenever you cast a spell that causes damage, any creatures that take damage from the spell…” does not conform to how metamagic feat wording usually works and is slightly confusing, as it insinuates that the feat is applied to all spells. Now note that this feat is fully functional; this is just me being very nitpicky and no, I will not punish the pdf for this wording-wise..

Okay, so next up would be Lineage feats – what are these, you ask? Well, essentially they are a take on the horror trope of a sinister legacy your character may have – you know, the idea of tainted blood and the lure of its power that may turn you into the very monster you’re seeking to defeat. Thus, they come with drawbacks that are hard to resist and LP-costs that represent one of 3 general stages of influence exerted over the character – and yes, they may prompt saves. The way to track the influence is via a Lineage Point score. Let’s just say this: The concept is NARRATIVE GOLD. This is essentially one of the best takes on Ravenloft-like dark powers I’ve seen in ages and I *really* hope Fat Goblin Games will continue to expand the concept – two thumbs up, especially for horror games! Herein, a werewolf-themed lineage is provided and while I could begin nitpicking here as well, that’s not my task and the concept overrides that voice in my head easily with the glorious fluff.

Speaking of which – the new items are awesome in their flavor and fluff: From hidden blade straps to odd roots, the items are damn cool, though the lack of proper bonus type codification once again has me gnash my teeth slightly. Want an example of a cool item? What about balls that contain silvery mist that potentially sickens creatures vulnerable to silver? Yeah, damn cool.

The magic items provided should also fit perfectly within any horror-themed game – from a mask that nets you a vampiric bite attack to a hide armor to transform into a wolf, the items and the new special weapon ability are nice – though e.g. not all spells have been properly italicized. Now I’ve been exceedingly nitpicky in this review so far, but it is my joy to pronounce that the new spell-section is pretty awesome – from better tumbling due to the protection granted by mirror image-like duplicates to turning into angry swarms of bats or conjuring instantaneous swarms that deal damage and vanish, this section conjures awesome imagery. As a special treat, we receive one glorious incantation to make all creatures in the AoE into animals – absolutely awesome in its details and fluff.

The pdf also provides archetypes, the first of which would be the many-masked rogue – masters of disguise and vanishing in the crowds, also tied to a neat organization. The advice provided for players and DMs also help make this one distinct. The wrathful hunter ranger is interesting in that it may forgo gaining additional favored enemies in lieu of a couple of different options for an array of solid options – not particularly awesome, but okay and solid.

Editing and formatting per se is rather nice, though the rules-language editing could have used another go. Layout adheres to a 2-column full-color standard…and this book is one of the most beautiful I’ve read by any 3pp, on par with LPJr Design’s books. Yeah, that beautiful. The original pieces of full color artwork have their own, distinct and awesome style, rendering this book VERY beautiful. The pdf comes fully bookmarked for your convenience.

John Bennett is one of my favorite authors regarding the genre of horror – he just *knows* how to properly weave a great tale. He can be considered a story-teller and yarn-weaver and for the first time, Vathak really came alive from the pages while reading this. The negotiation of the disparate elements have been subsumed under one cohesive, compelling narrative voice that provides a cool array of options. That being said, there are two components of being a game designer – the fluff and the crunch. John’s talent in crafting superb prose suffuses this book and makes it a good read indeed and yes, the high-concept approach extends to the crunch.

Crunch-writing, alas, is less of an art form than fluff, more of a kind of craft. And it is here one sees that John Bennett lacks experience in that arena – from the universally absent clarification of bonus-types (crucial to stacking) to slight wording ambiguities and minor design issues with e.g. the feats, the execution of these falls behind the promise of the superb prose. Add to that missing italicization for spells and you get the idea – essentially, this one suffers from a bunch of beginner’s mistakes. I’m confident they will be absent from future guides.

All in all, this is a nice player’s guide with some pretty cool ideas – the lineage feats are one glorious concept (which, not so coincidentally, can easily be mixed with Zombie Sky Press’ symbiote-rules from “It came from the Stars”) and the prose is extremely captivating. More than that, though, this guide made Vathak feel more like a whole, less like a disjointed tangle of ideas, than ever before. The writing is great, and while not yet perfect, this book sees me in very high hopes indeed for the future of the Vathak-setting. My final verdict will clock in at 4 stars – this is an inspiring read and one of those supplements that make you immediately want to play in a setting, in spite of its minor blunders in the crunch-department.

You can get this player’s guide here on OBS and here on d20pfsrd.com’s shop!