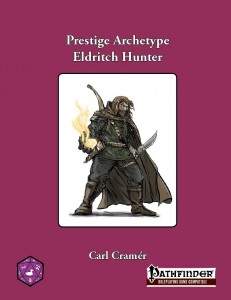 The eldritch hunter base class receives d8, 2+Int skills per level, 3/4 BAB-progression, good fort- and will-saves, proficiency with light and medium armors, shields and simple and martial weapons, but still incurs spell failure. They receive 3/4 BAB-progression, good fort- and will-saves and spontaneous cha-based spellcasting of up to 9th level. However, unlike a full spellcaster, their daily allotment of spells is diminished when compared to the sorceror to pay for the increased martial prowess. They also receive access to a sorceror’s bloodline at 1st level – here, the ACG’s release makes clarification necessary imho – bloodrager bloodlines may make the overall deal of this class a tad bit too good. That being said, I can’t fault the pdf for that, seeing it’s been released before the ACG. Bloodline spells are granted at a modified rate, though – the first being granted at 4th level, with every even level thereafter providing a bloodline spell of +1 level. Bloodline power progression is maintained at the usual levels, as is arcana.

Additionally, the eldritch hunter also chooses a combat style at second level and pursues this style via bonus feats every 3 levels thereafter. At 13th level, the class receives spell critical, which, alas, needs a caveat – as written, following up a crit with a swift action-cast may be nice, but there ought to be a maximum casting time restriction here to prevent the use of long casting duration spells in the conjunction with the ability. Finally, at 19th level, the class has ranger spells added.

The class also receives FCO’s – these are generally okay, though the dwarven one is extremely specific, only applying to acid/earth spells that deal attribute damage. Good luck getting something out of this one.

The eldritch Hunter is an interesting case – once again, the base PrC is obsolete by all means of the word and not particularly…let’s say…well-crafted. The restriction regarding armor and spell failure is a massive detriment for the class and somewhat counteracts the immense benefits it reaps with full spellcasting. Now the progression itself is pretty linear and much of my gripes about the Eldritch knight also hold true here – however, unlike the eldritch knight, the eldritch hunter has by now been changed in its baseline by the very concept of bloodrager-specific bloodlines – which should imho be addressed. Other than that, the general class idea can be considered pretty well-designed – Carl Cramér’s decision to delay massive spellcasting and hand slowly hand out the slots should make sure that the class steals neither the ranger’s, nor the sorc’s thunder. Spell Critical, as provided, is broken.

That being said, the bloodline issue somewhat makes this one imho a tad bit problematic; And yes, I’m aware of the specific “sorceror bloodline caveat here”; -still, that would have been a potential option to make this class more unique – my final verdict will clock in at 4 stars.

You can get this solid take on a ranger/sorc-combo here on OBS and here on d20pfsrd.com’s shop.